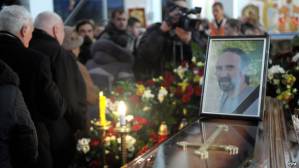 Mourners pass the coffin and photo of Yuriy Verbytskyy, a 51-year-old activist and antigovernment protester on Kyiv’s Independence Square, during his funeral in Lviv on January 24.

Ulyana Verbytska grieves for her father, Yuriy, a soft-spoken seismologist from the western Ukrainian city of Lviv.

In January, Yuriy Verbytskyy, 50, had taken leave from work and traveled to Kyiv to join the pro-democracy Euromaidan protests. He helped out at the protest camp’s kitchen, fixing sandwiches and buoying up demonstrators with warm tea and words of support.

"My father was a very kind person, " says Verbytska, a 26-year-old architecture graduate student in Lviv. "He was incapable of turning people down when they needed help."

On January 22, as the two-month-old protests descended into violent clashes with police, Verbytskyy was found dead in a forest outside Kyiv bearing horrific signs of torture. He was one of Euromaidan’s first victims.

"I knew he was on Maidan and I was worried, of course, the entire family was worried, " says his daughter. "At the same time, we also supported the protests."

Verbytskyy last spoke to his daughter from a Kyiv hospital where he was receiving treatment after a police stun grenade sent fragments into his eye. "Don’t worry, " he told her. "Everything’s alright."

Moments later, he and fellow activist Ihor Lutsenko, a prominent journalist, were abducted from the hospital by a group of men. Lutsenko showed up the next day, battered but alive.

Their captors, he said, had repeatedly beaten, tortured, and questioned them about Euromaidan. Lutsenko said he was eventually dumped in a forest, from which he was able to stumble to safety.

Verbytskyy never made it back. An official autopsy found that he froze to death.

Today, all but one of those suspected of the crime are still at large.

According to Ukraine’s new authorities, his killing was sanctioned by officials in former President Viktor Yanukovych’s Interior Ministry and Prosecutor-General’s Office. But out of 13 suspects, only one is currently in detention pending trial.

Verbytskyy’s brutal killing stood in sharp contrast with his own pacifist nature. Those who knew him describe him as a gentle, caring man with a passion for nature and alpinism -- a far cry from then-President Yanukovych’s portrayal of protesters as rabid nationalist radicals.

"He was against the use of violence, he believed it was always possible to reach an agreement with people, " Verbytska says. "Through his example he taught me to love nature and all forms of life."

Despite the chain of dramatic events unleashed by the Kyiv protests, including the deadly conflict pitting Ukrainian troops against pro-Russian separatists in eastern Ukraine, Verbytska still staunchly defends the democratic ideals upheld on Maidan and sees her father as a "hero for all Ukrainians."

"I believe my father didn’t die in vain, he wanted a better future for Ukraine, " she says. "Of course the current situation in our country is difficult. But we must remember those who gave their lives for it and for our future, and do everything we can to ensure their sacrifice wasn’t for nothing."

Not all families of Euromaidan victims, however, have been able to make sense of their loss.

Harik Nihoyan, the father of the first killed demonstrator, never shared his son’s enthusiasm for the protests.

This ethnic Armenian, who immigrated to Ukraine from the disputed enclave of Nagorno-Karabakh in 1992, says the thought that his son died for Ukraine has brought him no solace. "Maybe Ukraine will have a brighter future but we won’t, " he says, his voice brimming with anger. "We lost him, full stop." 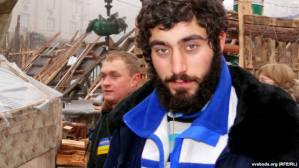 Serhiy Nihoyan left his home in Bereznovativka, a small village outside the eastern city of Dnipropetrovsk, in early December 2013 to join the Euromaidan protesters.

Known for his distinctive black beard, the 21-year-old quickly became a fixture on Independence Square, chopping wood or serving as security. He died on January 22 when riot police raided the protest camp. Medics say he was shot multiple times in the chest, head, and neck.

His parents, who say they "don’t care who is in charge" of the country, had been fiercely opposed to his departure. Now, they accuse former Euromaidan leaders, some of whom hold positions in the new post-Yanukovych government, of turning their backs on slain protesters.

"They all ran around Maidan, rallying, giving directions, but today they don’t care, " says Harik Nihoyan. "No one called us, no one came to see us, no one asked us a single question, nothing."

Millions of Ukrainians will nonetheless honor Nihoyan this week, along with the more than 110 activists who lost their lives during the protests. Proposals have also poured in from across Ukraine to pay lasting tribute to the victims.

A square in the western city of Berezhany has already been renamed after Nihoyan, and Ukrainian composer Valentyn Sylvestrov has composed a hymn in his memory.

In Lviv, members of the city’s alpine club plan to have a mountain in the eastern Caucasus named after their friend and fellow climber, Yuriy Verbitskyy.