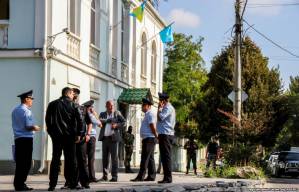 A court in Simferopol has imposed massive fines on the Crimea Foundation and its director in what the latter calls the latest step in a politically-motivated attack aimed at destroying the Foundation.

The Crimea Foundation was ordered to pay 4, 5 million roubles and its director Riza Shevkiev 350 thousand roubles.

Shevkiev told QHA that the court hearing had gone according to an anticipated scenario with the fines imposed for nothing. The ruling states that the fine is for having allowed the Mejlis to occupy the building without agreeing this with the State Cultural Heritage Committee, for having allowed the Avdet newspaper (which the Crimea Foundation is a founder of) to have its offices in the building, and that repairs were carried out without being agreed in the attic of the building. All of this was used as grounds for applying the maximum possible administrative penalty against the Crimea Foundation.

Shevkiev is convinced that this is all part of what is effectively a political contract against the Foundation.  He says that they were expecting an offensive, just didn’t know what mechanisms would be used.   He expects similar moves against the Foundation’s other building where they were planning to build a Crimean Tatar cultural centre.

“My bank accounts have been frozen, there is effectively no money in our accounts.  They’ll wait a little and then beginning confiscating the frozen property – 7 buildings in the city and will pay the fines through the cost of the buildings. The scenario has been worked out to the last point”, he says.

Shevkiev says that they will be continuing to fight this – first through the Court of Appeal, then at the European Court of Human Rights.

At the demand of the occupation regime’s ‘prosecutor’, the Cultural Heritage Committee lodged an application with the court to remove a cultural heritage building.   This is the building at No. 2 Schmidt St which is the property of the Crimea Foundation and had housed the Mejlis for well over a decade.  The building itself is indeed a listed building in the State Register of Immovable Monuments of Ukraine.

A date for the Economic Court hearing on the application to have the building confiscated has not yet been announced.

As reported, this major offensive against the Crimea Foundation and Mejlis, or the representative assembly of the Crimean Tatar people, began in force on Sept 16 when armed men surrounded the Mejlis building on Schmidt St while the FSB carried out an 11-12 hour search of the entire building.  They were supposedly looking for arms, narcotics and prohibited literature.

They removed the minutes from several meetings of the Mejlis; religious books and personal items, including money, belonging to Mustafa Dzhemiliev, the veteran Crimean Tatar leader banned by Russia from his homeland.  Six computer processors and hard disks were almost taken away with the officers refusing to give any idea when they would be returned.

Shevkiev explained then that the officers had read out an order stating that the search was in connection with the events on May 3 when around 5 thousand Crimean Tatars and other Ukrainians arrived at the crossing between the Crimea and mainland Ukraine to meet Mustafa Dzhemiliev who had been prevented from travelling to the Crimea the day before.

The protest that day was essentially peaceful with Dzhemiliev deciding to return to Kyiv to prevent likely bloodshed given the heavy-handed actions of the occupation regime and large number of OMON riot police, etc.   This has not stopped both numerous administrative fines, accusations of ‘extremism’ with ensuing armed searches and even criminal charges emerging months after the protest.

The following day, Sept 17, bailiffs arrived and read out a court writ ordering the building to be ‘vacated’ within 24 hours.  If not all property would be seized.

The official grounds cited for the move it should be stressed had nothing to do with the previous day’s search but were in connection with a writ issued by the Central District Court of Simferopol on Sept 15.

This document prohibited the charity from carrying out any of its powers as owner of the Mejlis headquarters and six other addresses, including its right to lease or sell the properties.  That document had been issued “to defend the interests of an unspecified circle of individuals” in a law suit against the Crimea Fund.  These mysterious individuals’ “interests’ are to be further protected by the Crimea Fund’s bank accounts in Vladimkombank being frozen.  The Fund was prohibited from opening new accounts.

The Mejlis and Crimean Tatars in general have been firmly against Russia’s invasion and annexation of the Crimea fearing – rightly – a return to Soviet-style repression under Russian rule.

Back in September Shevkiev linked the sudden escalation in aggressive behaviour from the occupation regime to the low turnout at the ‘elections’ organized on Sept 14 to the Crimean parliament and local bodies.  The Mejlis had called on Crimean Tatars and all Crimeans concerned about the grave rights violations since Russia’s annexation, and Crimean Tatar rights in particular, to boycott the elections.

Shevkiev suggested that the Crimean Tatars were to be used as a scapegoat, presented as the source of the ills facing the Crimea and as an enemy element, with repressive measures against them stepped up.   That may well have been one of the reasons, but the offensive against Crimean Tatars – and others who oppose Russian occupation -  began considerably earlier and is continuing.