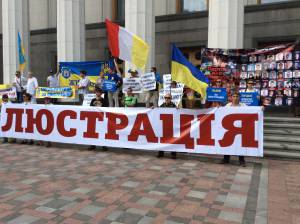 Ukraine’s Supreme Court has decided to ask the Constitutional Court to consider the constitutionality of the Law on Cleaning up the Government [the lustration law].  Supporters of the law have slammed the move.  Their suspicions as to the motives of those courts which oppose the law may be shared, however so too are concerns about the law in question.

The decision to lodge a constitutional submission was passed with 27 of the 43 judges voting in favour and 15 against. The Supreme Court plenum also decided to send “an appeal to the President, Speaker of Parliament and Prime Minister on bringing the said law into line with international standards regarding court proceedings, human rights, the Constitution and legislation”. The Supreme Court also reported on Nov 17 that the lustration check of Supreme Court judges is due to begin on Dec 1.

Dmytro Hnap, journalist and member of the Lustration Committee, called the judges of the Supreme Court ‘counter-revolutionaries”, calling the heads of the Kyiv and Kyiv oblast courts who have come out most strongly against the bill, ‘the most corrupt and those who issued rulings against EuroMaidan activists”

The following is only an outline of concerns about the bill already expressed here.

The draft law on lustration was adopted by parliament on Sept 16 without the text of the law having been made public.  It is unclear even whether the MPs knew what they were voting for.  After some delay President Petro Poroshenko announced that he would be signing the bill, and that it would also be sent for assessment to the Council of Europe’s Venice Commission.  That body of legal experts is highly likely to slam the entire law, but after a large number of people have been publicly named and dismissed as falling under the law.

Legal specialists and human rights organizations have pointed to major failings in the law which have serious implications for human rights.  If applied without exception, a huge number of people would lose their jobs, mainly for having held managerial positions for a year or more under the regime of President Viktor Yanukovych.

On the other hand, MPs who, for example, voted for the Jan 16 ‘dictatorship’ laws or any number of other laws which seriously compromised the judicial system, made the fight against corruption a farce, etc., are untouched.  The fact that they can stand for parliament again may be reasonable, but the fact that a nuclear safety expert in his post during the Yanukovych regime will lose his job and not be able to hold public office for many years, while there are no restrictions on former ruling regime MPs  seems scarcely fair or in the real spirit of lustration.

The law covers only those in fairly senior positions under Yanukovych, or back in Soviet times.  Replacements can therefore have served under presidents Viktor Yushchenko or Leonid Kuchma, and the grounds for considering that their appointments will ‘cleanse the government’ seem questionable.  There have been some other appointments recently, most disturbingly that of Vadim Troyan which suggest that appointments are now being made on the basis of how actively people are defending the country or their opposition to the previous regime.   Many of those replaced may have been tainted by collaboration with the Yanukovych regime, but criteria not based on professional skills and experience will not necessarily result in the aimed clean-up.

The most likely scenario is extremely selective lustration.  There are already questionable exceptions.  As reported, the exclusion of anybody elected to office even covers the Human Rights Ombudsperson who is elected by parliament.  She will therefore remain untouched while Ombudsperson, though if the law was fully implemented she would be publicly prohibited from holding public office because of her role under Yanukovych within the Justice Ministry.

The law imposes a largely artificial proviso that a person must have held their post for a year to be liable to lustration.  This does exclude Poroshenko who held a ministerial post under Yanukovych for nine months.

There is certainly no mention of Valentin Nalyvaichenko being subjected to lustration although he falls under the law as a graduate of a higher KGB institute.

Nor is there any independent body overseeing the process with the heads of the relevant bodies being in charge of ensuring the ‘lustration checks’.  As reported, in Kharkiv the city authorities were found in this way to have nobody subject to lustration.

Thus far there have been totally public announcements of people’s dismissal under the law.  They have been removed because of the position they held, no more, making the infringement of their right to privacy highly questionable.

The list of concerns regarding the lustration law can be continued.  Whatever the motives were of the court presidents and the judges of the Supreme Court, there are genuine grounds for doubts about the bill, including its constitutionality.  There is likely to also be a problem in the fact that the credibility of the Constitutional Court was all but destroyed during the Yanukovych years, and faith in the justice of their judgment is not guaranteed.