Mustafa Dzhemiliev: The sacrifice was not in vain 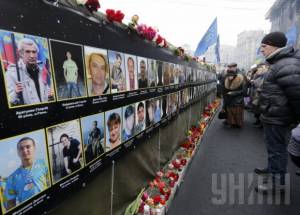 On the first anniversary of the Revolution of Dignity Mustafa Dzhemiliev, veteran Crimean Tatar leader and Ukrainian MP, was asked for his comments.

I answer that during World War II tens of millions died – maybe then also it wasn’t worth fighting, standing up to Hitler.  There wouldn’t have been so many victims.  Well, the Jews and Gypsies would have been murdered, and the others would have worked for the Nazis…

Yet if dignity and the longing for freedom have meaning for a person, they should not accept totalitarianism or authoritarian rule.

Nebesna Sotnya [ the Heavenly Hundred] through their deaths prevented the death of many other people. And Ukraine took a step forward. Thanks to such acts society consolidate and a nation emerges. Please note how we have united, regardless of origin or faith.  We all say that we are Ukrainians.

I can’t therefore have regrets, the sacrifice was not in vain.  We took a huge step in the direction of Euro-Atlantic integration. During Yanukovych’s regime the mere mention of the idea that we should join NATO was something unimaginable. And now the majority believe that we should change course in foreign policy – distance ourselves from Russia, move towards Europe.”

The words from 71-year-old Mustafa Dzhemiliev have particularly poignancy.  6 months old when the entire Crimean Tatar People were driven from their homeland in May 1944, Mustafa Dzhemiliev dedicated most of his life to the struggle for the rights of his people, including the right to return to his homeland.  His defence of Crimean Tatar rights and Ukrainian democracy, his unwavering commitment to only peaceful protest, have won him deep respect among Ukrainians and throughout the world.   He spent 15 years in the Soviet labour camps for this commitment, and has now been banished from his homeland by the Russian occupying regime. 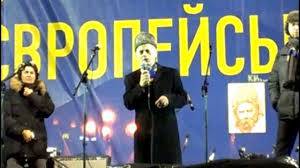 “Not one dictator who spilled blood has escaped punishment. Ukraine will be no exception. They will answer for the blood of each patriot. I call on my fellow citizens everywhere to create centres of resistance. I am proud of you, my dear fellow Ukrainians.  I am proud to be a Ukrainian!”.

The first large rally in favour of European integration took place on Nov 24, with around 100 thousand people gathering in the centre of Kyiv.

The protests began slightly earlier and crucially received the support of the Ukrainian Catholic University and soon other universities who heeded UCU’s call to understand that Ukrainian youth’s future was in the balance and to “publically express their position and support for Ukraine’s European future”.

The protests spread, however  gained real momentum a week later with the outrage over the brutal dispersing of totally peaceful protesters, most young students, on Maidan Nezalezhnosti in the early hours of 30 November.

By the next day, Dec 1, there were around 1 million protesters in the centre of Kyiv.  That day saw the most overt provocation especially on Bankova St near the president’s administration.

There was certainly violence, but almost solely directed against Maidan supporters.  The situation changed after the ruling majority pushed through totally illegal and draconian anti-protest laws on Jan 16.  It was only after that that the barricades were erected on Hrushevsky St and a relatively small number of protesters declared that they would use force in defending their rights.  This resulted in the laws being revoked, although some of the worst aspects were almost immediately brought in through Cabinet of Ministers decisions.

The regime’s use of the police, hired thugs or titushki and the courts to try to suppress peaceful protest was condemned both within Ukraine and by foreign governments and human rights organizations.

The distorted claims about a fascist junta having violently overthrown the government and seized power in late February were and continue to be at odds with the video footage which clearly showed unarmed protesters being gunned down.

On this first anniversary of the beginning of the EuroMaidan protests, Ukrainians remembered all those who died for Maidan, those now honoured as the Heavenly Hundred.

With sorrow and gratitude.