Savchenko Case: No legal grounds, no evidence and total distrust in Russian justice 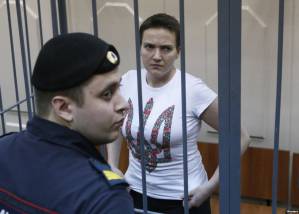 A deputy from the St Petersburg Legislative Assembly has condemned the political case against Nadiya Savchenko and said that it compounds total distrust in the Russian law enforcement system.

According to Alexander Kobrinsky, lawyer and deputy of the St Petersburg Legislative Assembly, there are absolutely no legal grounds for the case against Nadiya Savchenko nor any evidence of her involvement in a crime.  Although in principle, the Russian criminal code contains a provision allowing for the investigation of cases about crimes against Russian nationals abroad, he considers Russia’s prosecution of the Ukrainian former pilot, now elected MP, to be politically motivated.  “Everybody knows how she came to be in Russia”, he says, and adds that “the Savchenko case compounds total distrust in the Russian law enforcement system”.

Kobrinsky was interviewed by the Russian Niezavisimaya newspaper after it was announced that Savchenko’s party, Batkivshchyna had agreed that Savchenko will be sworn in together with other MPs on Nov 27, with her signed oath being displayed on the screen.

It was reported earlier that members of Ukraine’s new parliamentary coalition have agreed that Nadiya Savchenko should represent the Verkhovna Rada at the Parliamentary Assembly of the Council of Europe [PACE].  This adds a powerful argument to the already huge number of reasons why Russia should release the Ukrainian pilot they have been holding in detention for many months.

Whether this will have impact in Russia is probably questionable.  Niezavisimaya spoke also with Alexei Makarkin, a Russian political scientist, who suggested it was unlikely that Savchenko’s nomination had been agreed in PACE, nor that the latter would be issuing any statements regarding the detention of their delegate. He believes that Russia will demonstratively ignore the move, and points out that Savchenko was elected and became PACE delegate after being arrested and remanded in custody.

This is possibly true, but Nadiya Savchenko was arrested after being captured by Kremlin-backed militants in Ukraine and her subsequent abduction to Russia and prosecution remain scandalous.

The 33-year-old (now former) Ukrainian military pilot was captured by the militants in the Luhansk oblast around June 17, and abducted to Russia where she was first formally remanded in custody on July 3.

Both the investigators’ application for her detention, and the court’s ruling referred to “the territory of the Donetsk and Luhansk people’s republics” – self-proclaimed ‘republics’ which despite substantial funding and manning by the Kremlin have not been formally recognized by Russia.

Despite the fact that a video of Savchenko’s interrogation by the militants was posted on June 20, in which it is quite clear that she has been captured in the Luhansk oblast, Russia has maintained that she entered Russia ‘voluntarily’, pretending to be a refugee, and was arrested after being stopped in a routine check.

They even suggested recently that she might face an extra charge of ‘illegally crossing the border’.

Savchenko recently recognized the current head of the Luhansk ‘republic’ Igor Plotnitsky has having been one of the men who abducted her.  She has stated categorically that she was taken to Russia by force, in handcuffs and with a bag over her head.

The investigators have tried to both get all court hearings held behind closed doors and prevent testimony being added to the case which proves that Savchenko was nowhere near the place where the two Russians were killed.  The investigators have order two new expert assessments, giving almost no information to the defence about their content, although one is linked to the phone and sim-cards taken from Savchenko when she was taken into custody (with the investigators presumably claiming this to have been in Russia).  In the meantime, the defence have promised that new evidence will be presented this week which should prove once and for all that Savchenko was already in Luhansk when the journalists whose deaths she is accused of complicity in were killed.

There have been calls for Savchenko’s release from western governments and the authoritative Memorial Human Rights Centre has declared her a political prisoner.