Russians against sending (more) troops into Ukraine but support ‘republics’ 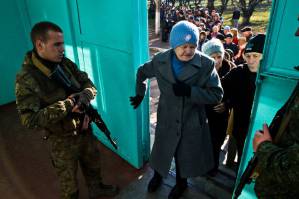 According to the latest Levada Centre opinion poll, 55% of Russians expect renewed military action in Donbas, but 58% are against Russian forces being deployed (with 26% categorically against).  The level of support for Russian military involvement was slightly higher than in September (23% against 21%; in September 63% were probably or definitely against.)

Two thirds (65%) believe that Russia should recognize the self-proclaimed Donetsk and Luhansk ‘people’s republics’, with 26% categorically in favour.  This figure was lower than in May when 72% supported recognition, but unfortunately the question does not appear to have been asked more recently.

The Levada Centre is an authoritative centre for investigating public opinion, but the question does seem phrased in a way that gravitates towards an affirmative answer: “Do you think that Russia should recognize the independent Donetsk and Luhansk people’s republics?”.   This is in keeping with presentation in the Russian media where very often even the word ‘self-proclaimed’ is omitted, and various militants are referred to as the ‘prime minister’ or former defence minister of DPR, etc.

Asked whether they considered “the elections on Nov 2 in the Donetsk and Luhansk people’s republics for heads of state and deputies of the local parliaments legitimate”, 27% answered yes, definitely, a further 36% said probably yes.  Only 11% said probably not, and 6% categorically not.

This is at wide variance with the position taken not only by the Ukrainian government, but by all western countries, the OSCE and UN.  The ‘elections’ were condemned as in breach of the Minsk agreements and illegitimate.  They were also roundly criticized for grave irregularities, for the obvious use of free food and vegetables sold dead cheap, and for observers from far-right and Stalinist parties who were funded and brought in from Moscow.  Russia had said that it would recognize the elections, but finally said only that it ‘respected’ the results.   (more details here).

The survey asked people when, in their opinion, the crisis in Ukraine had begun.  An absolute majority (60%) answered “from the beginning of EuroMaidan”; 18% “from when Viktor Yanukovych was removed from office”; 7% “from the referendum in the Crimea and joining of the Crimea to Russia” and 2% “from when the DPR and LPR were proclaimed”.