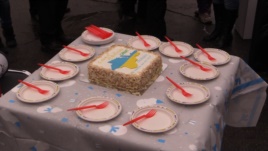 Civic activists and friends of Sasha [Oleksandr Kolchenko] met on Wednesday to mark his 25th birthday and show moral support for the Crimean activist and opponent of Russian occupation held in detention in Moscow. 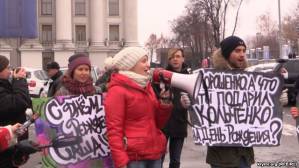 The birthday action was held outside Ukraine’s Foreign Ministry because the activists believe that the Ukrainian government is not doing enough to secure the release of Oleksandr Kolchenko and Oleg Sentsov.

As well as a birthday cake, the activists held balloons and placards reading: “Nobody needs permission to be free!”; “Poroshenko, what have you done to secure Sasha’s release”?, “#freeKolchenko” and others.

Dmytro Kuleba, special representative of the ministry came out to the activists and assured them that his ministry would be making all effort to obtain the men’s release.  Foreign Minister Pavlo Klimkin joined in the birthday greeting campaign, tweeting Sasha Kolchenko his best wishes.

As reported here, people were asked to post pictures of Sasha’s native Crimea from here on social network pages, with the hashtag #freekolchenko and greetings.

Both Kolchenko and world-known Ukrainian film director Oleg Sentsov took part from the outset in peaceful protest to Russia’s annexation of their native Crimea.  Both were arrested in May and have been charged with a ‘Right Sector’ terrorist plot  which produced no terrorist acts and for which the main ‘suspects’ are hopelessly miscast.

Sasha Kolchenko is a well-known left-wing anarchist who would have nothing to do with Right Sector.  39-year-old Sentsov has been gaining an international reputation for his films and is also a solo father with two young children. He had no links at all with Right Sector, but was a strong supporter of the EuroMaidan movement.

They and two other Crimean opponents of Russia’s annexation of the Crimea – Gennady Afanasyev and Oleksy Chirniy – have been accused of a plot to commit terrorist acts and destroy infrastructure on May 9, Victory Day.

No terrorist acts took place although all four were arrested after Victory Day.  The only ‘evidence’ in the case comes from ‘confessions’ which Afanasyev and Chirniy made when they were held in detention in Simferopol without access to lawyers and family.  Both Kolchenko and Sentsov have repeatedly asserted that they were tortured and threatened with more serious charges if they did not ‘confess’ and testify against EuroMaidan and the Ukrainian government.   They refused and Sentsov has indeed been accused of ‘masterminding’ a bizarre ‘plot’ to commit acts of terrorism that never happened.

See the texts below, especially Ukrainian Citizens and Russia’s Political Prisoners for more details about the case.