Returning - or Silencing - the Names of Stalin’s VictimsStalin returns to the Russian CurriculumStalingrad as latest step in re-glorification of tyrantNeo-Nazis in Moscow’s ServicePro-Russian separatists start their own anti-Semitic TV channelPro-Russian, anti-Roma, anti-Semitic and hunting out Ukrainian speakersThe Donetsk anti-Semitic leaflets – what should not be overlookedEast Ukraine crisis and the ’fascist’ matrixRussia continues its false narrative as defender of oppressed minorities in UkraineRussian propaganda claims Jewish organizations supporting Maidan are bringing on "second Holocaust"The Crimean referendum’s neo-Nazi observersPutin’s Neo-Nazi HelpersChief Rabbi and others dismiss Putin’s “anti-Semitic extremist” claimsRussian propaganda must be challengedWestern Media: Don’t distort the situation in Ukraine!Russia’s aggression poses dangers beyond Ukraine’s bordersCrimea: Anti-Semitic card and other provocation in time of siegeMr Putin: We ethnic Russians and Russian speakers don’t need protectionDangerously orchestrated Crimean exerciseRussia claims threat to its interests and life of Russian nationals in Ukraine
• Topics / Victims of political repression 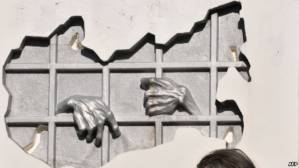 A Russian civic initiative to install commemorative plaques to the victims of Soviet repression at the homes where they lived before they were executed or sent to perish in the gulag will launch in two weeks.

The project, known as “Last Address, ” which draws on the vast historical database of Soviet repression compiled by the rights group “Memorial, " invites Russians to pay between 3, 500 and 4, 000 rubles ($75-85) for a plaque -- either for a relative or somebody who lived in their building.

Each will commemorate a single victim of Soviet repression who was formally rehabilitated posthumously. For such people -- many of whom were buried in mass, unmarked graves -- these minimalist plaques will serve as a final formal memorial.

"This kind of project is important at any time, ” said Yelena Vicens, a former journalist, who is coordinating the project with journalist Sergei Parkhomenko.

“But I think right now it is especially important because people don’t remember the past. Many don’t want to remember their history, the history of their families, city, or country. I think this is a way of making a nation healthy. This is medicine for the nation."

The project, which comes nearly 23 years after the fall of the Soviet Union, is the first of its kind in Russia.

Instead of focusing only on the crimes of the Stalin era, it commemorates any victim of Soviet repression who was later rehabilitated. These number more than 2.6 million,  according to Memorial’s online database.

In Moscow, it is already possible to search Memorial’s archive by address.

The first wave of up to 26 plaques will be installed -- bureaucracy allowing -- on December 10, which is also International Human Rights Day.

The number of plaques to be installed will depend on demand and the number of requests that organizers receive. Organizers say they have received approximately 300 requests so far. Vicens hopes that the more commemorative plaques are installed, the more interest will be generated.

The "Last Address" website features an interactive map that marks where plaque requests have been submitted and plaques are already being prepared for installation.

The 10 x 17 centimeter plaques will be made of galvanized steel and will read "Here Lived, " followed by the name and profession of the victim as well as his or her date of birth, arrest, death, and rehabilitation.

​​The "Last Address" project will begin in Moscow, but aims to spread across the country – and indeed abroad.

It mirrors a street project by German artist Gunter Demnig called Stolpersteine that has overseen the installation of thousands of commemorative brass pavement stones to the victims of Nazi Germany from 1933-45.

Launched over twenty years ago, project organizers this month tweeted that there are now 48, 000 of the commemorative “Stolpersteine” – which translates as “stumbling blocks" in German – spread across 18 countries.

Vicens said she personally intends to sponsor a plaque for Maks Abramovich Kantorovich,  a Jewish Swiss-born journalist and member of the German Communist Party who had lived in her building in Moscow until he was accused of espionage, arrested, and shot in December 1937.
Kantorovich was one of tens of thousands who were rehabilitated posthumously in August 1956 under Stalin’s successor Nikita Khrushchev.

"Last Address" has already won plaudits among Russian politicians including Aleksei Navalny, Russia’s opposition leader under house arrest, who praised Parkhomenko for the initiative on Facebook.

“Kudos to Parkhomenko for launching all this, ” Navalny wrote, sharing a link to an interview about the project on his popular Facebook page.

For her part, Vicens says the project is an important part of Russia coming to terms with its past.

"As long as there is no internal harmony from this knowledge about the past, a nation cannot have a future, " she said.