Who (hasn’t) answered for crimes against Maidan? 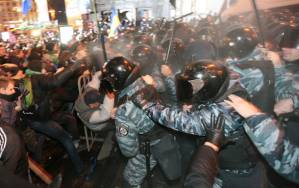 A year has passed since the savage beating of students on Maidan in the early hours of November 30 that was to determine the course of EuroMaidan – and of Ukraine.  A year later, many Ukrainians feel understandable frustration that virtually no one has answered for the wave of repression in which criminal instructions from above were carried out by Berkut riot police, traffic police and other officers; by the prosecutor’s office and judges.

The attack on protesters on Maidan was foreseeable.  Yanukovych and his prime minister Mykola Azarov had used similar tactics, including an early morning raid, to crush the ‘Tax Code Maidan’ protests towards the end of 2010.  The level of brutality on Nov 30, 2014 and the deployment of Berkut officers against unarmed protesters, many of whom had been fast asleep, were, however, unprecedented.

So was the size of the demonstration the following day.  Around a million people came out in protest, understandably appalled by the regime’s primitive brutality. Suspicion was aroused early that the authorities were planning provocation, and this proved correct.  There were almost no police officers to be seen in the centre of Kyiv, but huge contingents of Berkut officers and others near the president’s administration on Bankova St.  where clearly orchestrated disturbances began.

There was plenty of evidence that young men, most in masks, deliberately provoked confrontation and particularly damning video footage showing one supposed rabble-rouser (in a purple jacket) first apparently fighting the Berkut officers, then standing together with them.   Berkut officers charged after most of the young louts had fled, beating up and then detaining peaceful protesters who hadn’t managed to run away.  See: Bankova Prisoners: Anyone will do?

Of these first ‘Bankova St’ prisoners, around half had been so badly beaten by the Berkut officers, that they were unable to stand in the courtroom.  Despite no evidence that those arrested had had anything to do with the disturbances, certain judges saw no problem with remanding them in custody for two months.

This willingness by representatives of the prosecutor’s office and judges to take part in overtly repressive measures was to be seen until Yanukovych fled in late February 2014.

The law enforcement bodies are swift to reel off statistics about the number of criminal cases initiated [according to the Prosecutor General’s Office – 1, 167], of people interrogated, etc.

Real results are thin on the ground.  None of the people believed to have played a significant role in the crimes have been detained.  Many, of course, including Yanukovych, ex-prosecutor general Viktor Pshonka and ex-interior minister Vitaly Zakharchenko, ex-head of the National Security Council Andriy Klyuyev, ex-head of the SBU Oleksandr Yakimenko, fled to Russia and under the current Kremlin leadership remain protected there.

A year on nobody has answered for the brutal attack on Nov 30 (or for the gratuitous violence against protesters on Bankova St on Dec 1).

There is no information to indicate that measures have been taken with respect to the prosecutors and judges willing to remand in custody the Bankova prisoners, and other EuroMaidan activists without any evidence at all.

Nobody has been convicted over the death of Yury Verbytsky, abducted from hospital on Jan 21, tortured and left to die in a forest outside Kyiv.  Two men are seemingly in custody in connection with the abduction of Verbystky and Ihor Lutsenko, with a further 10 people on the run.

The investigations continue into the killing on Jan 22 of EuroMaidan activists Serhiy Nihoyan; Mikhail Zhyznevsky; and Roman Senyk; and the killing of 49 protesters, gunned down on Feb 20 on Institytska St.

There is also a separate investigation into the killing of 16 police or internal forces officers in January and February.

There were three Berkut officers in custody facing charges over the killings on Feb 20, however one of the men - Dmytro Sadovnik absconded after his controversial release from custody on Sept 19 and is now in hiding.  He had been due in court on Wednesday Oct 1 for an appeal hearing which could have reinstated his detention.  He did not appear, with disturbing discrepancies as to why not.

The trial over the killing of journalist Viacheslav Veremiy is underway, however the person suspected of shooting and killing him -  Dzalal Aliev, nicknamed Dima Dagestanets - is still in hiding.   In October one of the titushki, or hired government thugs, who has admitted beating Veremiy during the attack in which the journalist died of a gunshot wound was released from custody pending trial.  He is accused only of group hooliganism, despite the level of the violence and fact that the attacks, abduction, etc. were for money

A repeat investigation is underway into the attack on Tetyana Chornovol, journalist, activist and now MP (see:  Suspect in Tetyana Chornovol attack receives asylum in Russia and below).  The police now accept that the attack was politically motivated. Chornovol was adamant from the outset that Yanukovych and his henchmen were behind the attack in December when she was savagely beaten and left for dead.

Nobody has answered for the mass deployment of titushki in abducting people, beating them up and in a few cases possibly killing them.  This is especially important given the degree of cooperation with both Berkut and ordinary police (see for example, Police together with titushki in Dnipropetrovsk and Zaporizhya

Many of the key figures in the mass repression are in hiding, or effectively, under Russian protection.  Others may or may not be prosecuted.  Perhaps the greatest threat is in the fact that judges who issued knowingly wrongful rulings to order remain to this day in their posts.

Viacheslav Khrypun from Sudebno-yuridicheskaya gazeta explains that a temporary commission within the High Council of Justice is supposed to be checking all rulings passed in EuroMaidan cases.  The commission was finally set up in September 2014 and has thus far considered only 10 judges, with another 78 remaining to be checked.

Those judges who the commission considered to have acted in breach of their oath are continuing to work as judges.  This is because the previous makeup of the High Council of Justice and High Qualification Commission of Judges was dismissed, but new members have not been appointed. Then in October, one of the members of the temporary commission, Yury Karamzin left, depriving the commission of a quorum.  Since Karamzin was one of the Supreme Court representatives, the latter should have appointed a new member of the commission at its plenary session on Nov 17.  It did not.

There are various ways of sabotaging reform and this is surely one.  It is worth remembering that Viktor Yanukovych set to making changes to the judicial system within months of being elected president.  The new system was criticized by Ukrainian civic organizations, the Council of Europe’s Venice Commission and Parliamentary Assembly of the Council of Europe for the scope it gave for political control of the courts and other issues.  By the time EuroMaidan began, the changes had resulted in judges even more dependent on the heads of the courts with the latter in a number of cases, including against Yanukovych’s opponents, taking orders from up top.  There were numerous examples already of the judicial system’s grave level of degradation with this graphically demonstrated by the repressive role played by many judges against EuroMaidan activists.

Failure to address this, and soon, will place the new government’s commitment to real reform in question.