When Russia shouted that Ukraine had attacked Crimea: A tale of torture and fabrication Yevhen Panov: Foiled ’Ukrainian Crimea Saboteur Plot, or the Limits of Russian FSB TortureIn Memoriam: Yevhen Hrytsyak, Leader of the Norilsk UprisingIgor Kotelyanets: On my brother Yevhen Panov & other political prisonersYevhen Zakharov: The Prosecutor’s office is not carrying out its oversight duties in penitentiary institutionsKharkiv Environmentalist Yevhen Kotlyar killed on MaidanThree former police officers sentenced over death of Yevhen ZvenigorodskyYevhen Zakharov: Speech in Parliament during the election of OmbudspersonYevhen Zakharov: StatementTrial of police officers over death of Yevhen Zvenigorodsky continuesYevhen Korniychuk amnestiedOn the detention in custody of lawyer Yevhen KorniychukYevhen Sverstiuk Awarded ’Light of Justice’ PrizeIn Memory: Yevhen KontsevychYevhen Tsybulenko: Ukrainians thrive in EstoniaTanks against SpringYevhen Zakharov: There are grounds for assuming political motives over the situation with LutsenkoBolshevik rebuff to Ms Severinsen and Ms VolvendYevhen Sverstyuk: “We will need to view the Orange Revolution as a rehearsal”Yevhen Zakharov: “The Ukrainian judicial system needs urgent reform”
• Topics / We remember 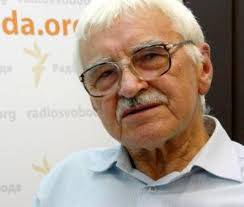 We mourn together with family and friends the passing of Yevhen Sverstyuk, Ukrainian writer, thinker and civic figure, a man who spent years in the Soviet labour camps for his commitment to truth and to Ukraine and who became a moral beacon for very many in Ukraine and beyond.

Yevhen Sverstyuk had been suffering for some time from a serious illness, and died on Monday, Dec 1 in a Kyiv clinic, a few days before what would have been his 86th birthday.

He had followed all the events over the last few years, and in a recent Radio Svoboda interview spoke of the “huge social test of strength” that Ukraine was going through. “Both the struggle with the authoritarian regime and the victory of the Maidan revolution are imbued with the long familiar historical set up of foreign intervention. All of this is logical and one of the classic turns of history which is a test for perhaps all peoples in our Europe.  All of that together makes for an incredibly responsible test of the freedom and independence of Ukrainians which needs to be passed through with dignity. “

He was one of the members of the First December Initiative, a group formed of highly respected Ukrainian intellectuals including former political prisoners and former Head of the Ukrainian Greek Catholic Church, Patriarch Lyubomir Husar.  The group was formed during the regime of Viktor Yanukovych and on a number of occasions issued statements regarding the highly contentious ‘language law’, clearly rigged elections and others.

Yevhen Sverstyuk was one of the Shistdesyatnyky [the 60s group], members of the intelligentsia whose cultural and political activities provided a vital form of moral opposition to the Soviet regime during the 1960s.  Many, including Sverstyuk, paid for their independent thinking with periods in the Soviet labour camps.

Sverstyuk was the author of several crucial Samizdat texts  and his public speeches, for example, at an evening in memory of the poet Vasyl Symonenko were major events.

One of the Samizdat works, written together with Ivan Svitlychny and others, was entitled “On the trial of Pogruzhalsky” about an arson attack on the Kyiv Central Scientific Library in May 1964 which destroyed a large number of Ukrainian studies works and archival material. The author believed that the fire was part of a policy to destroy Ukrainian heritage.  It appears that Pogruzhalsky, the man convicted of the crime, was in fact working for the KGB.

He took part in literary evenings, meetings and prohibited gatherings, such as at the Monument to Taras Shevchenko and in September 1966 in memory of the Jews massacred at Babyn Yar which the Soviet regime preferred to ignore.

He was arrested on Jan 14 1972 and convicted of something termed ‘anti-Soviet agitation and propaganda’ to 7 years labour camp [the maximum term] and 5 years exile.  The charges were over articles, in particular “Sobor u rystovanni” [Cathedral under scaffolding], as well as public addresses to teachers in 1965 where he had criticized ideological stereotypes and the system of lies in the work of schools.

He served his sentence in the Perm political labour camps.  He continued from labour camp to defend victims of political repression, signing various appeals and letters in support of particular individuals.

He was later the President of the Ukrainian PEN Club and Editor of a Christian newspaper ‘Nasha Vira’ [Our Faith].

Speaking to Radio Svoboda, former dissident and psychiatrist Semyon Gluzman, said: “The fact is that in Ukraine there are very many professional patriots.  Different sorts – conscious, mercantile, various.  But there was also Sverstyuk.  And now we no longer have him.  This is a tragedy for the country”.