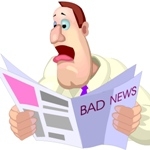 Ukraine’s new government has taken a number of steps that arouse concern, but probably none more so than the creation of a ‘ministry of information policy’.  Fears that this is an attempt to create an Orwellian Truth Ministry are refuted by those in power but hardly assuaged by the fact that nobody has any idea what ‘information policy’ means, nor the ‘information security’ that it will be dealing with.

The move has been widely condemned both within Ukraine and by Reporters without Borders and the Committee to Protect Journalists.  RWB calls the creation of an information ministry “the worst of all possible responses to the serious challenges that the government is facing” and stresses that the media must not be regulated by government.

A country at (information) war

The new minister of ‘information policy’, Yury Stets has headed the ‘department for information security’ of the National Guard since its formation on June 29, 2014.  This, he says, involved establishing cooperation with the Security Service, the National Broadcasting Council and the Radio Broadcasting and Television Concern with regard to the gathering, processing and checking of information sources, preparing a mechanism for swift response to reports within a military situation and making operational managerial decisions.

Stets says that this work in ensuring ‘information policy and security’ including replacing damaged broadcasters and reinstating the broadcasting of Ukrainian media on liberated areas of the Donetsk and Luhansk oblasts.  The department, he asserts, was involved in getting hostages released, as well as in uncovering and ‘neutralizing’ cells printing separatist material.  In conditions of war, and with Russia waging a major propaganda offensive against Ukraine, the above-listed activities are on the face of it justified.

Stets is now, however, minister of ‘information policy’ and his attempts to justify this  ‘ministry’s’ existence and role are considerably less convincing.

As under the presidencies of Viktor Yushchenko and Viktor Yanukovych, all kinds of dubious initiatives are presented as following long traditions set in various democratic countries.  In this case, Stets cites the experience of Great Britain during the First World War and then during WWII.  His statement that this ministry was transformed into the Central Office of Information which existed in the UK until 2012 and answered, inter alles, for ‘state information policy’ is disingenuous.  COI was a non-ministerial body running information campaigns on issues that affected the lives of British citizens, from health and education to benefits, rights and welfare.

Its predecessor - the information ministry was certainly linked with propaganda and control of information during war time.  While Russia is undoubtedly waging undeclared war against Ukraine, the Ukrainian government is still clinging to its unregulated and ill-defined ‘anti-terrorist operation’ making legal justification for any such propaganda and control highly questionable.

Stets then descends into the same labyrinth of meaningless phrases which previous regimes have used to claim the importance of something they call ‘information security’.

The phrases are ominously reminiscent of the notorious ‘Doctrine of Ukraine’s Information Security’ which the National Security and Defence Council produced back under Yushchenko.   This document was written in Ukrainian but was effectively a copy-paste job from a similar Russian document.  That document from 2009 was full of the terms which the Council of Europe in 2007 had recommended Ukraine remove once and for all, including ‘information security’.

In 2011 Yanukovych’s regime went further still, creating a new division within the Security Service [SBU] to defend the “legitimate interests of the State “in the information security sphere”.

Instead of discarding dangerously loose gobbledygook, Ukraine’s leaders have now decided to create a Ministry to ‘”draw up a strategy of national information security, manage the relevant resources, defend national interests and support freedom of speech”.   Stets probably added the last words for good effect since whatever ‘information security’ may mean, it is safe to assume that it is not connected with protecting freedom of speech.

This is not necessarily to say that freedom of speech must take priority over all else. With Russian propaganda overtly lying, forming pernicious stereotypes and stirring up belligerent antagonism towards Ukraine, there is a strong argument for imposing restrictions on broadcasting frequencies and ‘press’ freedom for propaganda channels and their staff whose role has little to do with journalism.  There are also other ways in which freedom of speech must be restricted in times of war, including to ensure the safety of Ukrainian soldiers defending their country.

Stet writes that the ministry should become an “authoritative and effective instrument for dealing with the following tasks:

drawing up and implementing a unified policy of information security including providing the population with accurate information from first sources; and providing the government, president and security council with full, high-quality information enabling them to take effective decisions on the country’s security;

promoting Ukraine in the world, forming image-making instruments for this;

attracting investment for the creation of a national information product;

forming a staffing reserve for development of the communication sphere, implementing the relevant international decisions and standards.

None of this was subjected to public debate, nor specialist consultation.  Media representatives, including some of those newly elected to parliament, knew nothing about it and have expressed their concern.  The reasons are clear even from the above tasks which do not withstand scrutiny or juxtaposition.  There is no need for a “unified policy of information security” if the task is to provide the public with accurate information, only honest journalists.  The government would do better to work on media legislation, in particular on ensuring media ownership transparency.

If the task is to provide disinformation or propaganda for the sake of the country’s image, or in countering Russian propaganda or disinformation, then regulation is urgently needed.  With a ministry created to protect nebulous ‘national information security’, the scope for abuse is enormous.