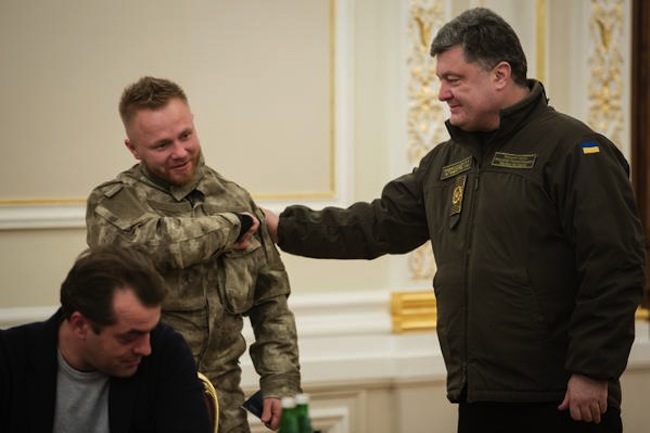 When people are risking, often sacrificing, their lives for their country, quibbles about questionable neo-Nazi views may be out of place.  This is not the case where they are fighting for another country, and Ukrainian President Petro Poroshenko’s decision to grant Sergei  Korotkykh, a fairly notorious Russian/Belarusian neo-Nazi, Ukrainian citizenship cannot fail to raise eyebrows.

The President’s website informs that on Dec 5 Poroshenko handed an internal passport “to Belarusian Sergei Korotkykh who has been fighting in the Azov battalion since it was created and is the commander of reconnaissance. The President thanked Sergei Korotkykh for his courageous, dedicated service”.  He also announced that the Defence Ministry, together with the Interior Ministry, is preparing a number of submissions to grant Ukrainian citizenship to fighters “who selflessly defend the country’s sovereignty and territorial integrity”.

The courage and commitment of volunteer fighters of the Azov battalion have been demonstrated in military action over recent months and in their defence of Mariupol, and gratitude and recognition of their bravery are certainly warranted.  The battalion, however, is known just as much because of the pronounced neo-Nazi views of its commanders and at least some of its members.

Those views are shared by the foreign nationals who have joined Azov, including Sergei Korotkykh.

According to an original report on the UNIAN website, Korotkykh [known as ‘Malyuta’] is a Belarusian far-right radical with a formidable neo-Nazi background.  He was formerly on the political council of the National-Socialist Society, many of whose members were later convicted of racially or politically motivated murders.  He is a friend of the Russian neo-Nazi and former skinhead leader (whom UNIAN calls pro-Putin) Maxim Martsynkevich [‘Tesak’], and a former member of the neo-Nazi Russian National Unity party, many of whose supporters are fighting on the side of pro-Kremlin militants in eastern Ukraine.  One of the original leaders of the self-proclaimed Donetsk people’s republic, Pavel Gubarev was once a member of this organization.

“Korotkykh has been accused of organizing a powerful explosion in the centre of Moscow in 2007 which by sheer chance did not kill anybody, and an attack on the Belarusian opposition figure Dmitry Sannikov in 1999. The opposition media in Belarus have accused Korotkykh of collaborating with the Belarusian and Russian security services, citing the fact that Korotkykh escaped punishment for the explosion in Moscow and for a knife attack on three anti-fascists in Minsk in 2013.”

All of these details have been removed, together with the word ‘neo-Nazi’, from the edited version of the same report.  Why this happened can only be guessed, however it was almost certainly not because the information was found to be inaccurate.

While most of the details involve accusations, rather than proven facts, all are widely known, and, if true, damning.  Korotkykh is certainly wanted for questioning in Russia over the Manezh explosion.  He seems to have surfaced in Belarus (where he has citizenship, although he is originally from Russia), and was arrested together with Martsynkevich and one other person in February 2013 following the above-mentioned knife attack on three anti-fascists.  According to one report, it was Korotkykh – “a person no less obnoxious than Tesak”, who stabbed one of the anti-fascists twice, one of the stab wounds proving serious, although not fatal.

In an article in the opposition website Belarusian Partisan entitled “Who is Malyuta working for?”, Dmitry Petrushkevich suggests that it was Korotkykh [Malyuta] who inflicted all the knife wounds that left one man in intensive care and two injured. He points out that in a country where people are jailed for 15 days for supposedly using foul language and supposedly lashing out with your hand at a riot police officer’s shield can get you three years inside, it is inconceivable that a person would escape punishment for a videoed knife attack.  Yet this appears to be precisely what happened.  Martsynkevich was released, supposedly for cooperating with the investigators.  The next morning, Korotkykh was also released.  The author notes that neither Belarusian nor Russian media were particularly interested in Korotkykh, and “the absolute impunity of pro-Russian neo-Nazis in our country did not interest [journalists].  While only such circumstantial evidence is provided, there are suggestions that Korotkykh has close ties with the Lukashenko regime.

Korotkykh was a member of the political council of the National Socialist Society, formed in Russia in 2004.  According to a report, two years later ‘close relations’ between Korotkykh and Martsynkevich created the impression that the latter’s Format 18, notorious for murderous attacks on people from Central Asian republics or Asia working in Russia and down-and-outs, was a part of the NSO.  Format 18 turned against NSO after the latter expelled Korotkykh for harming the organization.

There is considerably more information to be had from a simple Google check.  So much so that the President’s Administration can only be concluded to have not done their homework. Editing UNIAN reports cannot remove scandalous details in the biography of a person now granted Ukrainian citizenship.   This is a serious omission and, unfortunately, not the first.  Proper investigation could have averted the appointment of Vadim Troyan, Azov deputy commander and member of the neo-Nazi ‘Patriot of Ukraine’ organization to the responsible post of head of the Kyiv Regional Police.

The edited version of the report on UNIAN also omits mention of plans to bestow Ukrainian citizenship on other foreigners fighting for Ukraine.  Given the chequered background of this first individual, it is much to be hoped that Ukraine’s leaders will do some serious research – and thinking about the message they wish to give Ukrainians and the international community - before making any further appointments or granting citizenship on the basis of undoubted bravery on the military front.