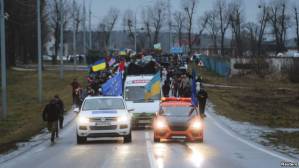 A former traffic police officer was sentenced on Wednesday, Dec 10 over his part in the overt persecution of AutoMaidan activists during the EuroMaidan protests.  The officer – I.A. Turchyn received a suspended sentence of one year’s restricted liberty with a probation period of one year.  He was also banned from holding any law enforcement position for one year.

The information on the Kyiv Regional Prosecutor’s website is extremely short on detail which, if the report by AutoMaidan activist Roman Maselko is correct, may be because the prosecutor’s application for a totally symbolic fine of 850 UAH was so totally unsuccessful.  As well as the suspended sentence, Judge O. Hryshko from the Kyiv-Sviatoshynsk District Court also allowed a civil suit from a victim seeking 10 thousand UAH compensation.

Turchyn was found guilty of official falsification [Article 366 § 1 of the Criminal Code] in his drawing up of 14 administrative protocols against ‘AutoMaidan’ activists in January and February 2014.  The maximum sentence possible was 3 years imprisonment so the actual sentence passed was relatively mild, though considerably more than the fine sought by the prosecutor.

Maselko calls the ruling significant for at least three reasons.  He believes it marks real implementation of a key demand of Maidan [the Euro- and Auto-Maidan movement], that being to punish those guilty if abuse.  They have, secondly, demonstrated the strength of civil society.  He notes that the case was terminated at the end of September, but reopened following protests.

The third reason is more negative.  Maselko calls this a sentence of the entire prosecutor’s office and all judges, and evidence that nothing has truly changed.  He points out, for example, that there is nothing in the file material to indicate that Turchyn acted on instructions and did not just decide for his own reasons to falsify the protocols.  Moreover Turchyn only admitted guilt in having failed to ascertain who was driving the car, not over the drawing up of administrative protocols in the absence of any actual infringements.

While the judge did opt for a harsher sentence than the prosecutor’s proposed (small) fine, he also rejected applications from the victim, including the application to question the accused again since the lawyers representing the victim in the case had not been at the original questioning and there were things that needed to be established.

According to Maselko, the judge, just as much as the prosecutor, wanted to close the subject and may have opted for a somewhat more severe sentence to avert attention from the AutoMaidan representatives’ attempts to find out who issued the instructions to traffic police like Turchyn. Maselko believes that a deal was reached with the traffic police officers facing charges: you take on the blame, and go silent about instructions from above, and we’ll ensure you get the minimum sentence.

Deployment of traffic police for political orders began shortly after Viktor Yanukovych became President.  On many occasions they were used to prevent protesters, or even believers from the Kyiv Patriarchate of the Orthodox Church, getting to Kyiv.

After the AutoMaidan car procession on Dec 29, 2014 to Yanukovych’s controversial residence at Mezhyhirya and the sumptuous homes of others in high positions, activists and journalists who took part received visits from traffic police officers, or invitations to come to the police station for a “chat”.

A large number of traffic police, prosecutors and judges were involved in overt repression.   The traffic police protocols, were used to deprive activists of their licence for 3 or 6 months.

In January, for example, Judge Oksana Tsarevych from the Pechersky District Court in Kyiv stripped Ukrainska Pravda journalist Oksana Kovalenko of her license even though Kovalenko’s car could not have been at the place where the alleged administrative offence took place.  The ruling was passed in the absence of either Kovalenko or her lawyer who had asked for it to be deferred due to other

Those who obeyed criminal orders and were guilty of politically-motivated persecution must answer for their actions. On the other hand, attempts to block proper investigation are an indicator of the powerful will to avoid the lessons of Maidan and the commitments made to it.