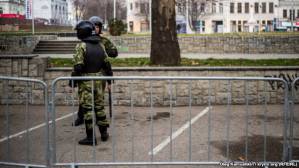 Bans were not enough for the Russian-installed puppet regime in the Crimea, and riot police, FSB, metal detectors and young louts were deployed to ensure Crimean Tatars were prevented from holding traditional meetings on international Human Rights Day.

The leaders installed at gunpoint after Russian soldiers seized government buildings in Simferopol on Feb 27 clearly felt that human rights defenders were a major threat.  On Dec. 10 those same government buildings were guarded by fighters with heavy ammunition as well as the ‘self-defence’ paramilitaries believed responsible for murders, abductions and violence against pro-Ukrainian activists. Central Lenin Square, where for many years Crimean Tatars had held peaceful gatherings to mark Human Rights Day, was cordoned off by a metal fence.  Anybody wishing to pass through had to brave the gauntlet of police officers and metal detectors.

As reported, the Mejlis or representative body of the Crimean Tatars and other Crimean Tatar organizations had been warned in advance that they would face charges if they tried to hold the gathering.

The same repressive measures had been applied to stop the remembrance gatherings on May 18 marking the seventieth anniversary of the Deportation of the Crimean Tatars, as well as traditional meetings on Crimean Tatar Flag Day and European Day of Remembrance for Victims of Stalinism and Nazism on Aug 23.

No rational explanation is given for the bans which have not applied over recent months to festivities marking Russian language day or, recently, a demonstration in support of Russian President Vladimir Putin by a highly marginal Crimean Tatar group.  The bans are simply imposed and then enforced in heavy-handed mode.

The use of metal detectors was clearly aimed at suggesting to the broader public that the Crimean Tatars posed some kind of threat.  All such traditional gatherings have been peaceful, ending in resolutions on Crimean Tatar rights issues.

The measures applied to prevent the gathering were repressive and ugly.  Around 20 young Crimean Tatar louts tried to disrupt a press conference on the ban given by the coordinators of a Committee in Defence of Crimean Tatar Rights.  The three speakers were daubed with zelyonka, a bright green substance which, when not hurled at political opponents, is used to treat minor abrasions.  According to Eskender Bariev, Mejlis member and coordinator of the rights committee, the attack was carried out by Eivaz Umerov, one of the above-mentioned pro-Putin Crimean Tatars who is trying to become deputy mayor of Sudak.

Bariev explained at the press conference that the Mejlis had cancelled a planned picket in protest at the ban on their gathering.  They feared precisely such attempts to provoke trouble, and stressed that they were responsible for ensuring participants’ safety.  He said that efforts had been made to intimidate Crimean Tatars, threatening punishment if they attended the picket.

“We are not fighting with anybody, but we are fighting for our rights and values”, Bariev stressed.

The Mejlis issued a statement on Dec. 10 informing of its decision to activate civil society in defence of human rights.

The Committee in Defence of Crimean Tatar Rights is planning to lodge complaints against the ban with Russia’s Human Rights Ombudsperson, the prosecutor’s office and the courts.  The Mejlis had done everything according to legally established procedure, and there was quite simply no justification for the ban.

Unfortunately, there are no grounds for believing that such complaints will be heeded.  The ban on a gathering to mark Human Rights Day was a gratuitous, but typically repressive act by the Russian occupation regime.

Refat Chubarov, head of the Mejlis, wrote on his Facebook page that this was the first year that he personally was not in the Crimea on Dec. 10.  It is also the first time that such peaceful measures to mark the date have been banned.  And the first time that on this day, his deputy Akhtem Chyyhoz was summonsed for questioning.  He was called as a witness over highly questionable prosecutions initiated some 6 months later over the protest at the Armyansk border between mainland Ukraine and the Crimea on May 3 (see: Another Arrest in Dubious ’May 3’ Case against Crimean Tatars).

Repressive measures against all opponents of Russia’s annexation of the Crimea, but most specifically of the Crimean Tatars began almost immediately.

On April 22 veteran Crimean Tatar leader Mustafa Dzhemiliev was handed a 5-year-ban on entering his homeland.  This came two days after the 71-year-old former Soviet political prisoner and Ukrainian MP, on his first return to Simferopol since annexation, insisted that the Ukrainian flag be reinstated over the Mejlis building.

Since then a similar ban has been imposed on the current head of the Mejlis, Refat Chubarov.  A major offensive has been launched against the Mejlis itself with the occupation regime clearly trying to crush a body which it has tried and failed to force into submission.

Instead of carrying out proper investigations, the occupation regime is seeking  to have a law passed which would provide a past and future amnesty for the so-called ‘self-defence’ paramilitaries who played a large, and often bloody, role in establishing Russian rule.  This contrasts tellingly with the trumped-up charges still being concocted over the peaceful protest on May 3 when Mustafa Dzhemiliev was prevented from entering the Crimea.

It seems clear that Moscow and its occupation regime in the Crimea are trying to silence dissent among Crimean Tatars or force them into exile. They are also using various forms of enticement to come up with some politically malleable Crimean Tatar ‘representatives’ – like the individual who could find nothing better than to daub zelyonka over rights defenders on Human Rights Day.