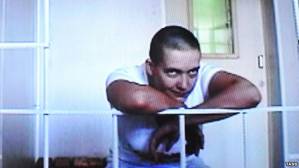 On the same day that Ukraine’s Verkhovna Rada passed a resolution calling on Russia to release Ukrainian MP and former military pilot Nadiya Savchenko, her lawyers have expressed concern over her state of health in Russian detention.

Lawyer Ilya Novikov reports that she is suffering an ear inflammation and that the prison doctors are not dealing with the situation.  “Loss of hearing in that ear is already total, and it looks as if it will get worse”, he writes.

Savchenko’s defence are stepping up their efforts to obtain the release of the former pilot who was captured by Kremlin-backed militants in the Luhansk oblast and is now facing dubious charges in Russia.  On Dec 15 a Moscow court will consider two appeals from the defence, including one against her extended term of detention.

On Dec 11 the Verkhovna Rada adopted a Resolution “On an appeal to Russia’s State Duma and President Vladimir Putin to release  Ukrainian pilot and MP Nadiya Savchenko”.

The Resolution states that Ms Savchenko was elected to parliament on Oct. 26 2014 from the Batkivshchyna Party and that her signed oath was publicly demonstrated in parliament on Nov 27 meaning that she has now  been sworn in as MP.

“The Verkhovna Rada states that Ukrainian MP and member of the Batkivshchyna faction … Nadiya Savchenko will, outside the quota system will represent the entire Ukrainian parliament in the Parliamentary Assembly of the Council of Europe and will be a member of Ukraine’s permanent delegation to PACE.

The statement goes on to explain that this is the first time that an elected member of the Verkhovna Rada is unable to take up her duties because she is clearly unlawfully and on groundless charges held in detention in another country in overt violation of international human rights.

Ukraine’s Verkhovna Rada therefore calls on the State Duma, the Russian President and other Russian bodies and officials to take all measures to secure Nadiya Savchenko’s release

It also calls for the “release of all Ukrainian nationals who, during the period of armed conflict in the east of Ukraine, were taken prisoner, illegally taken to the Russian Federation and held there against their will”.

321 MPs voted for the resolution.  There were no votes against, however 28 MPs did not vote at all.

Media reports say that the resolution calls for the release of Nadiya Savchenko, Crimean film director Oleg Sentsov and other prisoners, however the wording means that it only applies unequivocally to Nadiya Savchenko.  She was taken prisoner by Kremlin-backed militants from the so-called ‘Luhansk people’s republic’ on around June 17.  On July 3 a Russian court remanded her in custody and she has been in Russian detention ever since.  Savchenko says that she was taken across the border with a bag over her end and hands tied, and has made her attitude to the ‘lying Russian courts’ abundantly clear.  Russia’s Investigative Committee claims that she voluntarily entered Russia, pretending to be a refugee.  The Investigative Committee studiously avoids mentioning her capture by the militants, but even so the Russian version is difficult to take seriously. The investigators have also threatened to charge her with ‘illegally crossing the border’.

The prosecution tried hard to prevent inclusion of evidence from the defence which apparently demonstrates that Ms Savchenko was already in custody when the two journalists were killed.  This was in such flagrant breach of the law that their objections were finally overridden.

Russia is holding at very least 5 other Ukrainian nationals whose cases arouse grave concern.   Oleg Sentsov, civic activist Oleksandr Kolchenko and two other Crimean opponents of Russian annexation of the Crimea were arrested in Simferopol in May and were soon taken, against their will, to Russia [Moscow], where they remain in detention.  The FSB claims that they were behind a ‘Right Sector’ plot to carry out terrorist acts and destroy major parts of the infrastructure in Simferopol and Sevastopol on Victory Day, May 9.  Russia has constantly demonized the far-right and ultra-nationalist Right Sector and paid effectively no head to the party’s dismal showing in both presidential and parliamentary elections.

There were no terrorist acts although the arrests were made after the supposed date planned for them.  The only ‘evidence’ comes from ‘confessions’ given by Gennady Afanasyev and Oleksy Chirniy.  Both claim that Sentsov ‘masterminded the plot’.  Both Sentsov and Kolchenko have repeatedly alleged that they were subjected to torture and that Sentsov was warned that if he didn’t give testimony against EuroMaidan and the new Kyiv government, they would claim that he was the mastermind of the purported ‘terrorist plot’.

Sentsov is a well-known film director with a growing international reputation.  He is also a solo father with two young children, one of whom is autistic.  If this makes him a wildly improbable candidate for ‘terrorist mastermind’, so too must the claim that Kolchenko, a left-wing anarchist, was part of a far-right nationalist party ‘plot’.  Add to this the fact that the only ‘evidence’ is from confessions obtained while the men were totally in the control of the Simferopol enforcement bodies without access to lawyers or contact with their families.

Amnesty International has called for Sentsov and  Kolchenko’s release from Russian detention and Memorial has recognized them as political prisoners.

Yury Yatsenko, a Lviv law student in his final year, was not illegally taken to Russia but there are very strong grounds for believing that the charges against him and his detention in a Russian SIZO are impelled by political considerations and do not bear scrutiny.

Yatsenko and his friend Bohdan Yarychevsky, were detained in Russia’s Kursk oblast in early May.  They were held in a police station without food or sleep for two days, and not allowed to ring their relatives, a lawyer or the Ukrainian consul.  During that time the FSB [Russian security service] turned up, interrogated them, suspecting that they had been ‘sent by Dmytro Yarosh’ [the leader of Right Sector] or by Ukraine’s SBU.  The ‘grounds’ for such suspicions were a map showing Kursky Station found on their mobile telephone.  Yarychevsky explains that they’d saved it in order to get their bearings and know how to get to the station to catch the coach home.  The FSB, however, deemed the photo ‘suspicious’ and possibility indicating a plan to blow up the station.

Yatsenko and Yarychevsky were not officially detained for imaginary ‘radicalism’ or ‘nationalism’, nor were they suspected of any criminal offence.  A court on May 8 ruled that they had committed an administrative offence by ticking the box ‘private purpose’ on the border entry form, when they should have ticked the ‘tourism’ box.

Both young men were subjected to torture with the FSB wanting them to publicly testify that a military junta had taken over in Ukraine and to ask for political asylum.  They constantly received threats that if they didn’t cooperate, criminal charges would be concocted, with drugs or weapons planted.

This is basically what happened, though against only one of the two – Yury Yatsenko  - who has been charged with ‘smuggling explosive devices’.  Yarychevsky was deported and is taking part in efforts to obtain his friend’s release.