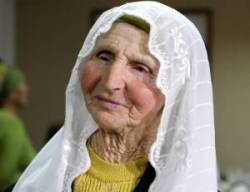 Veteran of the Crimean Tatar national movement Vedzhie Kashka turned 80 recently and should have been admitted to hospital on Dec 10 over a heart condition.  She couldn’t because she had been summonsed for questioning by the FSB [Russian Security Service].

“I’m not a coward, and never hid before nor now, and I therefore came, but I don’t know why I was called.”

Vedzhie Kashka, who arrived together with lawyer  Emil Kurbedinov, refused to give any testimony against herself and those close to her.  In fact, however, it seems that even FSB officers can be shamed.  Having made the elderly lady wait around an hour, they asked why she had not told them “what condition” she was in and may also have been discomforted to learn that they had summoned a veteran of the Crimean Tatar national movement.  They have promised to send no more such ‘invitations’.

Kurbedinov says that judging by the number of the case in connection with which the elderly veteran was summoned, she was regarded as (at least) a witness in the so-called May 3 case which 6 months on is generating new and highly dubious charges and arrests.

On May 2, 2014 Mustafa Dzhemiliev, veteran Crimean Tatar leader, former head of the Mejlis of the Crimean Tatar people and Ukrainian MP, was prevented from entering his native Crimea by the Russian authorities.  The 5-year-ban first reported, then denied by high-ranking Russian officials, was thus a reality.  The Mejlis cancelled all events linked with a spring festive holiday and invited Crimea Tatars to come to the Armyansk border crossing between mainland Ukraine and the Crimea.

There was no mention of any physical violence against a police officer, yet since October 4 Crimean Tatars have been arrested and remanded in custody for 2 months.  As reported here, one –  Tair Smedlyaev, Crimean Tatar activist and brother of the head of the Central Election Commission of the Qurultay, or Crimean Tatar National Congress, has just been released after Eskender Byliapop, adviser to the president’s political representative on the Crimea interceded on his behalf.

The charges against him, Musa Alkerimov, Rustam Abdurakhmanov and  Edem Ebulisov remain, and judging by the ongoing ‘investigation’, it is likely that others will follow.  There have also been numerous armed searches of Crimean Tatar homes, mosques and religious schools.

Perhaps one of the most cynical aspects to what the occupation regime is endeavouring to make ‘the May 3 case’ is the blurred line between accusations of ‘extremism’ and charges related to a specific, albeit alleged, incident.  Smedlyaev’s original detention was ‘explained’ by the court as because of the prosecutor’s claim that 60 people had asserted that Smedlyaev was an ‘extremist’.

It seems likely that such lack of clarity and the emergence of charges so late in the day are deliberate ploys aimed at intimidation.  If the summons for interrogation of an 80-year-old Crimean Tatar woman was also intended to cower and intimidate, it was grossly misdirected.