Russian Duma to consider criminal accountability for militant familiesManon Loizeau: "Absolute schizophrenia reigns in Kadyrov’s ChechnyaRussia effectively admits to using Zaporizhzhia nuclear power plant as a military base Russian horrific castration of Ukrainian POW was about terror and preventing own soldiers from surrendering Necessary conditionsRussia refuses to allow the refugee it killed in occupied Crimea to be buried A Bullet in the Head instead of a Lawyer. Russia steps up Terror in occupied Crimea 2020: There was no worse year in the realm of human rights after the Revolution of DignityUkraine’s SBU must not help Russia persecute an asylum-seekerPutin claims release of Russia’s most tortured Ukrainian political prisoners is a ‘special issue’Russia defends its ‘historic right’ to abduct Ukrainian political prisonersRussia’s FSB given carte blanche to silence allegations of tortureTortured to death for defending Ukraine. The first war crimes Russia brought to DonbasRussian INTERPOL sought arrest of Ukrainian ex-Prime Minister using ‘confessions’ from tortured political prisonersUkraine takes Russia to European Court of Human Rights over 71 Kremlin hostagesRussia is holding over 70 Ukrainian Political Prisoners of WarUkraine’s ex-Prime Minister briefly detained as Russia continues its “most falsified Ukrainian political trial”Russia admits to abducting 19-year-old Ukrainian Pavlo HrybRussia under Putin: Small child solemnly swears to prosecute her mother if requiredA Manhunt, A Typo, And Alleged Torture: Russian MMA Fighter Battles Chechnya’s Grip
• Topics / News from the CIS countries 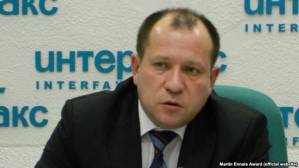 The Grozny apartment that served as the office of the local monitoring group branch of the Committee to Prevent Torture (KPP) was destroyed by a fire late on December 13.

Just days earlier, KPP head Igor Kalyapin had antagonized Chechen Republic head Ramzan Kadyrov by formally asking Russian Prosecutor-General Yury Chayka and Investigative Committee head Aleksandr Bastrykin to rule on whether Kadyrov had exceeded his authority by issuing orders in the wake of the December 4 insurgent attack on Grozny that the families of known insurgents be deported from Chechnya and their homes burned to the ground.

At least eight dwellings in Gudermes, Yandy, Engelyurt, Alpatovo, and Katyr-Yurt belonging to the families of suspected insurgents were torched last week.

The blaze at the KPP’s Grozny office was just one move in a series of reprisals against the organization and Kalyapin personally. First, Kadyrov claimed that evidence has surfaced that "a man named Kalyapin" was instrumental in channelling funds from Western intelligence services to Akhmat Umarov, the brother of former Caucasus Emirate head Doku Umarov, to finance the attack by insurgents on Grozny. Kadyrov demanded a probe to determine whether that Kalyapin and the Kalyapin "who came to the defense of bandits and their relatives" are one and the same person.

Then on December 11,  Kalyapin was pelted with eggs while speaking at a press conference in Moscow about the Chechen leadership’s policy of holding the families of suspected insurgents collectively responsible for their purported crimes.

Two days later, some 50, 000 people attended a mass demonstration in Grozny to protest "terrorism" and its perceived supporters; some participants carried placards inscribed (in English) "Kalyapin Go Home" and (in Russian) "Ramzan Kadyrov, protect us against the Kalyapins."

Meanwhile, KPP members told journalists from Al-Jazeera during a press conference in Grozny on December 13 their car was being followed and they were afraid to return to the apartment that served as their base.

The string of reprisals constitutes deliberate defiance of Mikheil Fedotov, chairman of the Russian president’s Council on Human Rights, who isquoted as having warned the Chechen leadership that "if something happens to the human rights activists, it will be [an act of] the utmost stupidity."

In the wake of the Grozny protest demonstration, but before the apartment fire, KPP lawyer Andrey Ryzhov affirmed that the organization will continue its work in Chechnya. "There is no point in trying to scare us... We shall remain in Chechnya … and provide support to all those who ask us, " Ryzhov wrote on his Facebook page.

"Novaya gazeta" journalist Elena Milashina too requested clarification from Russia’s Investigative Committee whether Kadyrov’s orders to exile insurgents’ families and torch their homes , and threats by a man believed to be Chechen First Deputy Interior Minister Apti Alautdinov to "do anything you like, incriminate, arrest, kill anyone" suspected of belonging to the insurgency, violate the law. She received a response saying the evidence she adduced (which included Kadyrov’s Instagram post and YouTube footage of Alautdinov) contained no evidence of any criminal offense, and therefore the Investigative Committee will take no action.