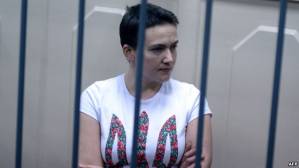 Nadiya Savchenko, Ukrainian MP and former military pilot, has gone on hunger strike in a Russian detention centre in protest at the failure to treat a bad ear infection and refusal by the prison staff to pass on medication prescribed by a doctor in Kyiv.  Her lawyers report that she has been refusing food since Dec 13.  As reported here, the inflammation began a week ago, and even if the SIZO [detention centre] does not have a specialist, the fact that one has not been found, yet they are stopping her from receiving medication via the lawyers, is doubtless in gross breach of international law.  The SIZO staff have said that they can only be accepted on Wednesday.

There are multiple questions to be put to Russian President Vladimir Putin at his press conference on Thursday, Dec 18 and Savchenko’s lawyer Mark Feygin has called on journalists admitted to the event to ask about the case.  Since her defence would not be allowed to raise the issue themselves, they have called their own press conference for Wednesday.  At it, he writes on Twitter, “we will present for the first time the proof of Savchenko’s innocence. We’re not Putin, you can ask us any questions”.

On Dec 12 Savchenko’s defence lawyers appealed to the International Red Cross to secure her release given that she is a prisoner of war.

With the Russian authorities denying her status as a prisoner of war and presenting a wildly implausible explanation for how she came to be in Russian detention, the need for hard-hitting questions is clear.

Nadiya Savchenko was elected to parliament on Oct 26 as member of the Batkivshchyna Party and has accordingly resigned from the Ukrainian armed forces.  In June, she was with the Aidar volunteer battalion when she was captured by Kremlin-backed militants from the so-called ‘Luhansk people’s republic’.  A video of her interrogation by these Kremlin-backed militants was published on June 20.

On July 2 a Russian court remanded her in custody until August 30.   She is charged with complicity in the death in a mortar attack of Pyervy Kanal journalist Igor Kornelyuk and sound recorder Anton Voloshin on June 17.   That very same evening the Russian Foreign Ministry presented a seriously questionable narrative about the circumstances of the deaths and the role that they and other journalists from State-controlled Russian media are playing in Ukraine.

Savchenko says that she was illegally taken against her will, in handcuffs and a bag over her head, into Russia.

Russia’s Investigative Committee asserts that she entered Russia voluntarily and was initially stopped in a routine check of documents.

The Russians have not even tried to explain how she came to be freed by the militants and left to wander across the border into Russia. Instead, as they did with Leonid Razvozzhaev, they have threatened to charge her with illegally crossing the border.

The investigators have tried to get the trial held behind closed doors, and to prevent inclusion of testimony that proves her innocent of the main charges