Occupation regime’s detentions in Crimea carried out with serious infringements 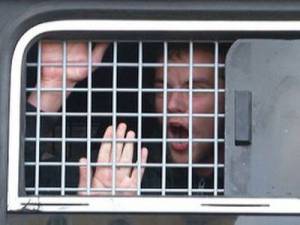 The actions of the Crimean law enforcement bodies in detaining more than 160 people at markets in Simferopol was in breach of Russian law, the  Crimean Field Mission on Human Rights reports.  People detained have said that they were held for several hours in the Centre for Countering Extremism.  They had DNA samples and fingerprints taken and were interrogated without any documents being drawn up.  Alexandra Krylenkova from the Field Mission stresses that people can be detained, but they must not be taken for questioning without being told what their status is.  She points out that according to Russian legislation, theoretically in force while the Crimea is under Russian occupation, a person detained on suspicion of committing an administrative offence (for example, something to do with migration) may not be questioned about the books he reads or the organizations he belongs to.

Krylenkova mentions other parts of Russian legislation which are of relevance and advises Crimeans to refuse to take part in procedure carried out in breach of the law.  In any administrative case, a person must give consent to have fingerprints or DNA samples taken.

As reported, the occupation ‘authorities’ in the Crimea carried out what can only be called ethnic raids of the Locomotive Market in Simferopol on Nov 15, detaining over 60 people ‘of non-Slavonic appearance’, and then the Central Market in Simferopol during which over 100 people were detained.

A few people faced administrative charges over migration infringements, however it is significant that the raids were carried out by the Centre for Countering Extremism and those detained were asked whether they have links to radical Muslim groups and whether they read ‘extremist’ literature.  The Crimean Field Mission reports that the detentions were carried out by men in plain clothes accompanied by masked men with machine guns.

Witnesses of the second raid reported seeing at least two people beaten up.  During that raid, the men in plain clothes said that they were from the Russian Interior Ministry’s Department for Countering Extremism.  When asked, they claimed that there was information about a bomb having been planted in the prosecutor’s offices and that they were detaining all those arousing suspicion until their identity was established.  Most of those detained were people visiting the market, though some were also vendors.  Of at least 100 people, almost all were ‘of Slavonic appearance’.

There were also raids, euphemistically titled ‘checks’, of cafés in Simferopol with the officers targeting both Turkish and Crimean Tatar cafés.   The officers were yet again from the so-called Department for Counting Extremism, though the assumption is that they were looking for illegal immigrants among visitors to the cafés.

Whatever the pretext, the behaviour is a gross infringement of people’s rights.  The involvement of officials supposedly concerned with countering ‘extremism’ is particularly ominous given the major offensive over recent months against Crimean Tatars.  A long list of gravely repressive measures have been accompanied by spurious references to Russia’s law against extremism.

Armed searches and raids have become worryingly frequent in the Crimea since Russia’s invasion and annexation.  So too have claims or supposed suspicion of ‘extremism’, with Crimean Tatars particularly targeted.