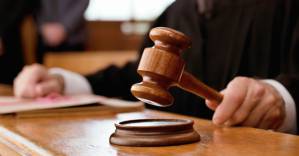 The Kharkiv City Council has yet again applied to the court for a ban on a protest action in the centre of the city, and a Kharkiv court has once again obliged.  The reason given was one commonly used for the nearly wholesale bans on demonstrations during Viktor Yanukovych’s presidency.  The Council claimed that “local self-government bodies do not have the opportunity to ensure the unobstructed holding of the said mass event, nor public order and the rights and freedoms of other people during it”.

The court supposedly considered “the evidence gathered for difficulties in preventing conflict and objective difficulties in safeguarding public order”.  It concluded that “there is a real threat to public health, protection of national security and public order making it necessary to restrict the gathering”.

‘Restrict’ in this case in fact means ‘ban’.

The Historical-Social Christian Civic Movement procession which the local authorities and Judge O. Titov from the Kharkiv District Administrative Court deemed to endanger public order and national security was to have been under the banner: “Against the lawlessness of the state authorities in the housing and communal, as well as the social, spheres in the country.” Its organizer Oleh Novikov had predicted up to 100 people would take part.

How the protest could annoy the local authorities is quite clear, unlike how it could seriously jeopardize national security or why the police were unable to guarantee that the procession would not run into conflict.

Under Yanukovych, local authorities very often applied for court bans and the courts seldom refused to oblige. In June 2013, for example, the same District Administrative Court in Kyiv under presiding judge Volodymyr Keleberda banned any peaceful protests outside the President’s Administration until the end of the year.

That ruling stated that having analysed information from the Kyiv Police the court believed it possible that the holding of an indefinite hunger strike could disrupt the interests of national security and public order; obstruct free access by members of the public and staff to an adjoining state institution. It asserted that it could disrupt the normal flow of traffic on the part of the road near where the pickets were taking place and “the rights and freedoms of residents of adjacent buildings.”

All of that was about the planned protest by the mother of a disabled child hoping to alert the President’s attention to violations by his subordinates of people’s constitutional rights.

Court bans were already widespread, and effectively became the norm during EuroMaidan.  So too did the heavy-handed measures by Berkut riot police against protesters.  In Kharkiv the authorities had long fought attempts by citizens to exercise their constitutional right to peaceful protest.   Such attempts were always endorsed by the courts, with both applicants and court generally claiming danger to public order, national security or ‘the rights of others’.

A tradition that the authorities and court are showing no sign of wishing to consign to the past.