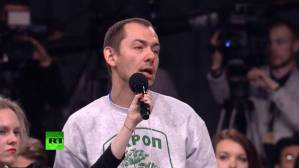 The most hard-hitting questions at Russian President Vladimir Putin’s press conference on Thursday came from Ukrainian journalist Roman Tsymbalyuk.  Respect due to one courageous UNIAN journalist whose initiative was frustratingly not followed up by Russian colleagues despite Putin’s evasive and dishonest response.

Tsymbalyuk’s questions first concerned “the punitive operation that you have organized in the East of our country, moreover, mainly against the Russian-speaking population.  It is no secret that Russian soldiers and Russian militants are fighting there.  How many have you sent [to Ukraine]?  How much [military] technology?  How many have been killed there? What would you as the chief commander of the forces tell the families of Russian officers and soldiers killed there?”

That was not all.  Tsymbalyuk went on to explain that Ukraine had had a president, “called Viktor” [Yanukovych], who is now in hiding in Putin’s Russia.  At one time Yanukovych imprisoned the first person on the Batkivshchyna Party list, Yulia Tymoshenko.  The first person on Yulia Tymoshenko’s party candidate list for the October 2014 elections is now in Russian detention. “Under what conditions will you release Ukrainian military pilot Nadiya Savchenko; Ukrainian film director Oleg Sentsov and at least 30 prisoners of war being held in various SIZO [pre-trial detention centres] in the Russian Federation?”

Putin responded first to the second question, demonstrating remarkably detailed knowledge of the highly specific line taken by the Russian Foreign Ministry and Investigative Committee regarding the deaths of a Russian journalist and sound engineer in the Luhansk oblast and the charges against Nadiya Savchenko.  The dishonesty began with his claim that the journalist Igor Kornelyuk was there to “to circulate objective and full information” about the situation. Kornelyuk’s last report claimed – falsely – that the Ukrainian military, whom he labelled “the punitive forces” were carrying out a mass purge of Shchastya in which “the civilian population is being killed, women and children, everybody – from 16 to 50”

Putin then mentioned the charges against Savchenko – that she gave information about the whereabouts of the journalists, and stated that if she were innocent, she would be released.

Savchenko’s lawyer Mark Feygin had stated the previous day that up to 30 Ukrainian prisoners of war are also held in Russian SIZO.  It remains unclear whether they were captured by the Russian military whose presence in Ukraine the Kremlin is denying or by the pro-Russian militants and then handed over to Russia.  Putin did not refute the information, stating only that they do not consider the others to be prisoners of war and that they are held in SIZO on suspicion of terrorist activities.  That, he asserted, answered Tsymbalyuk’s questions.

It did not, making the failure of other journalists to fill in the gap especially noticeable.  There were, after all, multiple questions obviously needing to be asked, about the dubious ‘terrorist plot’ charges against Oleg Sentsov and three other opponents of Russia’s annexation of the Crimea, with the extraordinary miscasting of the main defendants – a renowned film director and a young left-wing civic activist accused of a far-right conspiracy, the lack of any terrorist activities or of any evidence.

There were even more questions to be raised about how Nadiya Savchenko came to be in Russian SIZO after being captured by Kremlin-backed militants in Ukraine. There are no grounds for believing that Putin would have told the truth, but a question might have indicated to Russian viewers the cynicism of the lies he was repeating.  Given his references to the ‘decision’ of the investigators and court, it would have been appropriate to ask about the attempts to hold all court hearings behind closed doors and to prevent evidence being added to the file material which proves Savchenko could not have carried out the impugned actions.

On Wednesday Savchenko’s defence lawyers presented evidence, including mobile phone records indicating that Savchenko was already held captive an hour before the mortar shelling in which the journalists were killed.

Russia’s Investigative Committee has claimed that Savchenko entered Russia voluntarily and was initially detained to check her documentation, at which point, lo and behold, they discovered that they were holding a person suspected of complicity in two journalists’ deaths.

Savchenko asserts that she was abducted and taken into Russia blindfolded and hands tied.  This may be difficult to prove, but is not as wildly implausible as the idea that a person captured by pro-Russian militants and genuinely involved in the death of journalists from a pro-Kremlin TV channel should be released but choose to abscond into Russia.  She was even wearing camouflage gear to really carry off her alleged role as pretend refugee.

Putin then refers to Tsymbalyuk’s first question though his comments could only very loosely be called an answer. Putin acknowledges only “people who at the call of their hearts fulfil their duty or voluntarily take part in some military action, including in the south-east of Ukraine”.  They are not mercenaries since – he claims – they do not take money for fighting. He simply ignores the questions about Russian soldiers fighting and dying in Ukraine, although the evidence is already damning and mounting by the day.  It is Ukraine, he asserts, that is carrying out a punitive operation, but Russia is prepared to act as ‘intermediary’ in political dialogue.  One remark does seem to confirm suspicions that the Kremlin is giving up on ‘Novorossiya’.  They will ‘help’ regulate the situation “up to reestablishment of a single political territory”.   If this last phrase was intended to convince the West of Russian ‘progress’ towards resolution of the conflict, it must surely have failed.  With the rouble crashing, panic buying and an ever-increasing number of Russians directly aware of soldiers being sent to Ukraine, it is to be hoped that many Russians will also begin recognizing the empty assurances and blustering narrative driving their country into economic hardship and isolation.