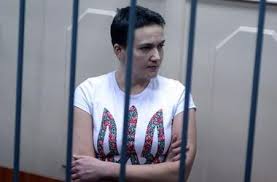 Judge Yury Pasyunin of the Moscow City Court rejected Savchenko’s appeal against the ruling extending her detention until Feb 13, 2015.  Nadiya Savchenko, who resigned from her military post after being elected to parliament in Ukraine’s October elections, had declared before the ruling was passed that if the appeal was rejected, she would remain indefinely on the hunger strike she began in protest at the failure to provide her with treatment for a serious ear inflammation.

“I will continue my hunger strike until I return to Ukraine. This is not suicide but the only method of fighting available to me”, she stated.

Her lawyer Mark Feygin reported on Monday evening that he had visited Savchenko in SIZO hoping to persuade her to stop the hunger strike which she began on Dec. 13.  He failed.

Nadiya Savchenko was captured by Kremlin-backed militants from the so-called Luhansk people’s republic on June 17 and was then found, at the beginning of July to be in a Russian SIZO [pre-trial detention centre].  The prosecution has provided no evidence to back their assertion that Savchenko was complicit in the killing of two journalists from the Russian Pyervy Kanal.  Igor Kornelyuk and his sound engineer  Anton Voloshin died after being caught in shellfire while travelling close to militants of the self-proclaimed Luhansk people’s republic.  Despite immediate reactions from Russia’s Foreign Ministry and government-controlled media, there is nothing at all to indicate that the two men were in any way ‘targeted’.

At the hearing on Monday, Feygin pointed out that in accordance with a judgement from the Supreme Court,   the prosecution is obliged to present material directly incriminating the defendant.  The investigators claim to have such material, but have not produced it. Feygin added: “If you have such material, but you are not for the moment showing them, then let her await the time when she and her defence are able to review the material without being deprived of her liberty.

Feygin asked for the Ukrainian MP and representative to the Parliamentary Assembly of the Council of Europe to be released on bail of 1 million roubles. He stressed that her ear inflammation was not being treated in SIZO where there is no otolaryngologist.

The defence have presented evidence indicating that Nadiya Savchenko was already held by the militants when the TV journalists died in shellfire, and thus has an alibi.

Putin’s assertion in response to the courageous questions from Ukrainian journalist Roman Tsymbalyuk, that it was the court that would decide whether or not Savchenko is released is disingenuous.  All Russian courts have provided the rulings required of them.  The initial detention order followed the investigators in referring to the deaths of the journalists being on the‘territory of the Luhansk people’s republic’, an entity which Russia itself has formally not recognized.

The courts have shown no interest in the evidence confirming Savchenko’s innocence or the lack of any material backing the prosecution’s case.  Nor has it probed into the manner in which a military pilot taken prisoner in one sovereign country, was found to be in detention in the neighbouring country.

Ukrainian pilot Nadiya Savchenko was captured around June 17, 2014 by militants in eastern Ukraine[Luhansk oblast].  A video of her interrogation by these Kremlin-backed militants was published on June 20.

On July 2 a Russian court remanded her in custody until August 30.   This has been extended several times and, after the rejection of her appeal, extends into February 2015.

Savchenko asserts that she was taken by force across the border into Russia.

Russia’s Investigative Committee has claimed that she entered, pretending to be a refugee and was arrested after being stopped in a routine check (wearing camouflage gear!).  They recently also threatened to charge her with ‘illegally crossing the border’.

The claims have convinced few outside Russia, and there have been widespread calls for Savchenko’s release.  The Russian Memorial Human Rights Centre has declared Nadiya Savchenko a political prisoner.