Ukraine’s ‘Spying Trial’: the Good, the Bad and the Totally Surreal 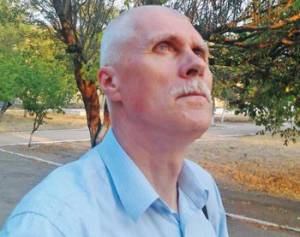 The good news is excellent, the bad – simply surreal. While the two engineers in detention for over two years on bizarre spying charges have finally been released, the professor whose book sparked off the whole ‘case’ is still charged with spying. He is accused of disclosing ’state secrets’ in a textbook where all the relevant information was taken from the Internet.

On Dec 19, Oleksy Rud and Serhiy Chychotka were fully acquitted by a court of appeal and released from custody.  The two young engineers and founders of a business enterprise called Top Science had spent over two years imprisoned on grotesquely far-fetched spying charges.  Despite no evidence of spying, and the information supposedly sold to China being widely available on the Internet, the prosecutor had asked for 12 year sentences for both men and the first instance court sentenced them to 5 years.  While sanity was finally restored at appeal level, it should be stressed that the men were found guilty in 2014 after the momentous changes that took place in Ukraine.

To make matters worse, the charges of spying have still not been dropped against Volodymyr Chumakov, the academic whose innocuous work caused Ukraine’s aspiring spy-catchers in the SBU [Security Service] to go into overdrive.

The case was, from the outset, disturbingly similar to the notorious spying trials in Vladimir Putin’s Russia with one of the ‘suspects’ the author of a radio electronics textbook mainly gleaned from the Internet.  It was in this work or more specifically the excerpts translated below that the SBU claimed to have found state secrets  - or questions, the answers to which WILL contain state secrets.

Two men were held in custody for almost 2 years despite the fact that the investigators never established when any alleged spying had taken place.  Nor did they provide any evidence to back their allegation that the two men’s Chinese colleague was an intelligence agent.  If they thought others would feel that just being Chinese was sufficient, they were mistaken.

The story such as it is

In 2008 former radio electronics student Oleksy Rud and Serhiy Chychotka met Hao Xichen, a Chinese national who had just graduated from a St. Petersburg institute.  Since science in Ukraine is desperately under-funded, they decided to create a firm - Top Science Ukraine – which would seek Chinese investors to support scientific initiatives in Ukraine.

All of this was entirely legal and the facts are not disputed by the SBU.  The latter, however, insists that this was all a front for providing “intelligence” to China.

This is where Rud’s former professor, Volodymyr Chumakov comes in – and the Internet.  The Web provided a rich source of information, mainly foreign, on railguns which Chumakov used in a textbook for students.  The prospect of funding for various projects from Chinese investors was agreed with his university which actively encouraged academic staff to seek outside financing.  A potential investor had asked for a report, and Chumakov intended to provide the book based largely on lectures to students.  That was when the SBU stepped in and prevented it being passed to the Chinese investor, claiming that Chumakov had disclosed state secrets in the book.

There was some material on railguns which for unknown reasons was classified until 2006.  Chumakov says that he never set eyes on that material and independent experts have not found the match which the SBU claim is there.  Even if it were there, the material ceased to be classified in 2006.

There has never been any attempt to use railguns for military purposes in Ukraine and next to no research in the area at all.  Why Chinese intelligence bodies would send a spy to Ukraine under cover to extract information which is available on the Internet remains a mystery.

According to the indictment against Chumakov, an expert assessment examined a list of 12 questions in the book and concluded that the answers to these questions “will contain a state secret”.   The entire indictment creates a surreal impression with other phrases no less startling.  The investigators constantly repeat that they were unable to establish when this or that happened, how the alleged secrets were passed on, or which intelligence services in China were involved.

From China Hao Xichen made an official application to testify by skype in the trial of Rud and Chychotka.  This form of communication is allowed by law, and Hao Xichen’s testimony was vital in the case, yet his application was rejected.

Chumakov’s assertion that his description of a railgun which the SBU decided was the technology for creating a secret weapon was widely available in open resources can be checked in Google and was confirmed by other academics.  Physicist Yury Lonin from the Kharkiv Physics and Technology Institute says that three physicists carried out their own assessment of the passages which the SBU deem criminal.  They agree entirely that none of the material is secret and that material on railguns has been on open access since 1986.

In original articles on this case, we pointed to the Soviet antecedents of this case which were first resurrected under Vladimir Putin in neighbouring Russia. It is excellent that a court in Ukraine has finally rejected the grotesque charges against two young men.  The 17-month-old ‘case’ against Kharkiv professor Volodymyr Chumakov must also be laid to rest.

Where the SBU found “state secrets”

1) Analysis of the results of theoretical modelling of the acceleration process of a projectile with 3 kilogram mass to the speed of 3, 000 metres per second at the railgun acceleration channel output (diagram 2.1) in erosion-free conditions showed that the electrode length exceeded 50 m. Such sizes make them unsuitable for practical use. 2) Increase in velocity given a particular barrel length can be achieved in a railgun with distributed electrodes. Analysis demonstrated that for a projectile with 2 kilogram mass to achieve a speed of 3 km/s, there need to be at least 6 rails in the accelerating system.

The experimental research was aimed at checking whether erosion-free acceleration of projectiles is possible. It was found that with initial velocity of around 10 m/s for linear density of a current under 6 kA/mm, no surface electrode erosion was observed.  This result corresponds well with theoretical calculations. Low-mass projectiles can gain this initial velocity through the formation of a gas-dynamic mixture with an electric blast of a plasma insert given the closed opening of the trunk from the breech side.  In the experimental railgun setup on diagram 2.6, with barrel length of 50 cm., a projectile with 2.5 g. mass was accelerated to 1 km/s.  Theoretically, in erosion-free conditions, such a mass could reach 2 km/s at a length of 50 cm.

A number of experimental studies in laboratory conditions have been carried out on propulsion of projectiles in a rail accelerator with a long acceleration channel. The functional layout of the experimental stand can be found at diagram 2.7a.

Diagram 2.7  - Structural layout and general appearance of a railgun  (the images can be seen here: chumakov.hol.es  (p. 38)

Theoretical modelling was carried out of the acceleration of a projectile with 3 kg mass, taking friction and head resistance into account [formulae (2.6), (2.8), (2.10), (2.12)].  The acceleration length chosen corresponds to L = 15 m. projectile velocity at barrel channel output v  3000 m/s.  Solution of the task shows that to ensure the chosen characteristics, the projectile needs preliminary acceleration with an initial velocity of no less than v 0 = 400 m/s; distance between the electrodes of no less than d = 150 mm.  The section of the channel for d = 150 mm is in the form of a square; linear induction constitutes L=6·10-7 gega newtons per metre.  The strength of the current in the main circuit is equal to I =360 kA, the strength of the forcing current is around I Ф = 3, 6 МА,  the time for the acceleration of the projectile is approximately 8.5 ms. The co-efficient for the transformation of electrical energy in the railgun into kinetic energy of the propelled projectile of 35%.  Consistency of linear inductiveness is ensured through the profile of the electrodes, the cut of which changes along the barrel according to a particular law (diagram 2.4.c)

The results of theoretical and experimental research and achievements in creating rail electro-dynamic mass accelerators demonstrate that with a given barrel length for accelerating projectiles of a given mass to supersonic speed, the most promising type of accelerators are the following systems:

1) magnetoplasmic railgun developed according to a multi-rail setup with no less than 6 rails.  In this kind of system the condition of erosion resistance is ensured, as well as the possibility of reaching a speed of around 3000 m/s at acceleration channel length of up to 15 m.

2.  magnetoplasmic railgun with the forcing of a magnetic field according to this or that setup.  The conditions for erosion resistance and the requirements for system durability are provided for. Optimization of temperature conditions and heat stability of the system is ensured through the profiling of the accelerator rails in accordance with the given law and through the formation of the relevant time dependence of the current impulse.