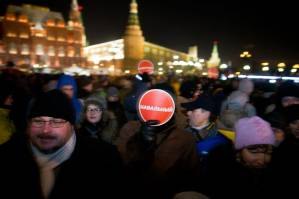 It is normally terrorists and criminals who take family members hostage, not puppet courts in trials of the Kremlin’s political opponents. Few see the real prison term imposed on Alexei Navalny’s brother Oleg in any other light, and there have been calls to boycott Yves Rocher for its cooperation with the Russian authorities

The jail sentence imposed on Oleg Navalny while opposition politician and anti-corruption campaigner Alexei Navalny received a suspended sentence brought a few thousand people onto the streets both in Moscow and St Petersburg and predictably heavy-handed measures by OMON riot police.  According to human rights monitor OVDinfo.com, around 70 are spending the night in detention after some 255 people were detained in Moscow.  Video footage showed clearly that protesters were pushed around and detained by riot police merely for being there.

There has been widespread criticism of Yves Rocher for its perceived collaboration with the Russian authorities over the prosecution, and calls for its products to be boycotted.

As reported, the court hearing was brought forward without any warning making any peaceful protest ‘unsanctioned’, and therefore illegal. Thousands came out nonetheless.  OMON riot police had cordoned off the entire area and at least one metro station exit was simply closed as the authorities went all out to prevent and / or crush protests.

Alexei Navalny was himself detained after he joined the protest, despite being on house arrest.  Reports say that he was visibly shaken when Judge Yelena Korobchenko read out the ‘verdict’ on Tuesday morning.

The above is simply an update since the news has been widely reported, including in the following, from RFEL:

Thousands of protesters braved temperatures of minus 12 degrees Celsius at the square while chanting "Freedom to Navalny" and slogans against Russian President Vladimir Putin, including "Putin is Russia’s shame!" and "Russia doesn’t trust Putin."

Others could be heard chanting: "Russians! Ukrainians! Brothers forever!"

About 18, 000 people used a Facebook page to indicate they would attend a rally.

At the same trial, Navalny’s brother Oleg was sentenced to 3 1/2 years in prison.

The different sentences for the two defendants immediately drew accusations from government critics that the state was holding Navalny ’s brother "hostage" in its battle against the Putin foe, and Oleg Navalny was handcuffed after the judge announced the sentences.

"Aren’t you ashamed of what you are doing, " Aleksei Navalny shouted out in the courtroom: "Why are you jailing my brother?"

"Oleg is a hostage, " said Ilya Yashin, a prominent opposition activist who came to the courthouse to support Navalny and his brother. "This is a mechanism of pressure on a person: try fighting corruption when your brother’s in jail."

Both men have also been ordered to pay a fine and 4.4 million roubles ‘compensation’ to one of the companies they were charged with defrauding.

Alexei Navalny came to prominence as an anti-corruption blogger.  Since then, the authorities have tried a number of times to imprison him on corruption charges which have all been condemned by the opposition and international observers as politically motivated.