Nadiya Savchenko: 19 days on hunger-strike and refused access to lawyers 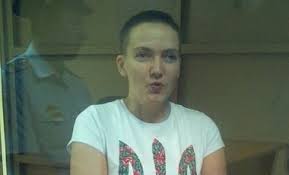 Nadiya Savchenko, Ukrainian MP and prisoner of Russia’s undeclared war against Ukraine, has now been on hunger strike in a Moscow SIZO [detention centre] for 19 days.  Her lawyers report that they will not be allowed to see her until Jan 12, heightening mounting concern for her health.

Nadiya Savchenko has been in Russian detention since late June 2013 after being captured by Kremlin-backed militants on June 18. She began her hunger strike on Dec 13 when the prison authorities refused to provide treatment or allow medication from doctors in Kyiv for a painful ear inflammation.  On Dec 22, after a Moscow court upheld her detention until Feb 13, she announced that she would not end her hunger strike until freed and back in Ukraine.  This was not suicide, she said, simply the only method of fighting available to her.

Savchenko’s defence lawyers report that irrefutable evidence of Nadiya Savchenko’s innocence has been lodged with the court.  In fact, however, ample proof that Savchenko was nowhere near the place where two Russian journalists died on June 17 was submitted to the court before the last hearing at which Judge Yury Pasyunin rejected Savchenko’s appeal against her detention.

At that same hearing, defence lawyer Mark Feygin pointed out that the prosecution is obliged to present material directly incriminating the defendant.  The investigators are continuing to claim that such material exists, but, unlike Savchenko defence, have failed to come up with it.  The prosecution has, however, attempted to block inclusion in the case of material proving that Savchenko has an alibi

Ukraine’s parliament has now formally nominated Nadiya Savchenko as delegate to the Parliamentary Assembly of the Council of Europe.  The next session of this body, which Russia is also a member of, is scheduled to begin on Jan 26.

Russia may well try to object saying that 33-year-old Savchenko was elected MP (at the October 26 parliamentary elections) after being arrested and charged in Russia.  This is certainly true, however as a military pilot and volunteer in the Aidar Battalion, she was also taken prisoner by Kremlin-backed militants in the Luhansk region of Ukraine before being abducted to Russia to face highly questionable charges.

Despite Savchenko’s own emphatic statement backed by a video of her interrogation by the militants on June 20, in which it is quite clear that she has been captured in the Luhansk oblast, Russia is continuing to maintain that she entered Russia ‘voluntarily’, pretending to be a refugee, and was arrested after being stopped in a routine check.

They have even suggested that she might face an extra charge of ‘illegally crossing the border’.

Savchenko recently recognized the current head of the Luhansk ‘republic’ Igor Plotnitsky has having been one of the men who abducted her.  She has stated categorically that she was taken to Russia by force, in handcuffs and with a bag over her head.

There have been numerous statements of concern from representatives of the EU, US State Department and others over Savchenko’s continued imprisonment.  She has been declared a political prisoner by the authoritative Memorial Human Rights Centre.

There is no evidence at all to back the prosecution’s assertion that Savchenko was complicit in the killing of two journalists from the Russian Pyervy Kanal.  Igor Kornelyuk and his sound engineer  Anton Voloshin died after being caught in shellfire while travelling close to militants of the self-proclaimed Luhansk people’s republic.  Despite immediate reactions from Russia’s Foreign Ministry and government-controlled media, there is nothing at all to indicate that the two men were in any way ‘targeted’.