Two jailed in Moscow for protesting against Navalny convictions 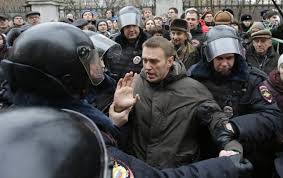 Two peaceful protesters who came out on Manezh Square on Dec 30 to protest against the conviction of Russian opposition leader Alexei Navalny, and his brother Oleg, have been jailed for 15 days,  The Tverskoy District Court found Mikhail Kriger and Roman Nyemuchinsky guilty of not obeying a lawful order from a police officer (Article 19.3 of the Code of Administrative Offences).  The charge is that standardly used against protesters.    It is not clear as yet whether others will face similar sentences.

Like a considerable number of the 255 people detained that evening, the two men are well-known for their civic position and have both spent time in jail for peaceful protest in the past. Nyemuchinsky, an applied mathematician, is also a frequent participant and many-time winner of such nationwide intelligence quizzes as ‘What? Where? When?’ and ‘Brain Ring’.  Kriger is active in the Solidarity movement and the Anti-War Committee.

As reported, at least 255 people were detained on Tuesday evening when a few thousand came out in protest at the real 3-year jail sentence passed on Oleg Navalny. This is very widely seen as a form of hostage-taking  with the Kremlin afraid of another fiasco as during the mass protests after its first attempt to get Alexei Navalny, one of President Vladimir Putin’s chief opponents imprisoned.  This time Alexei received a suspended sentence even though the prosecutor had demanded a two-year greater prison sentence for him than for his brother.  Few doubt that the regime hopes to subdue one brother by using the other as hostage.

Of those detained, around 70 people remained in police custody overnight with most detained the next day.

It is most likely that the numbers held overnight and / or jailed were also determined at a higher level.  It was at that higher level that the unprecedented decision was taken to bring the announcement of the verdict in the case forward by two weeks, with even the defendants only learning of the new hearing date the day before.  This was undoubtedly because of planned protests scheduled for the day of the hearing on Jan 15.  By suddenly changing the date to just before New Year, the authorities reduced the likely protest and made any rally by definition unsanctioned.  Any number could therefore be said to be disobeying police orders when told to disperse.

It remains unclear at present whether the planned protests on Jan 15 will still take place.  The cynicism of the current regime, its willingness to behave like terrorists in taking family members hostage were made abundantly clear by Tuesday’s convictions.  So too, however, its fear of a Maidan revolution like in Ukraine.  This was seen in the excessive measures taken to stop protest and in the fact that Alexei Navalny was again not imprisoned, even though he flouted house arrest to join the protest.