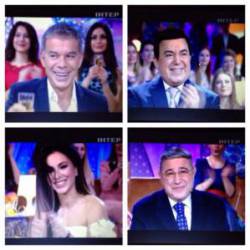 A quite scandalously inappropriate New Year concert on TV Inter has provoked understandable outrage and some less unequivocal reactions, including from the head of Ukraine’s highly controversial ‘Ministry of Information Policy’.  Yury Stets, minister of a new body promptly labelled an Orwellian ‘truth ministry’ by Ukrainian media organizations announced that he would seek a ban on television appearances of people who harm Ukraine or publicly support its opponents.  The National Broadcasting Council in its turn will consider proposals to strip the channel of its licence.

The choice of New Year mindless revelry could not have been worse.  Inna Dolzhenkova, writing for Telekritika, speaks of almost expecting them to interrupt the concert “Wait for me at New Year” at 23.00 Kyiv time for Russian President Vladimir Putin’s New Year address.  Whoever’s taste Inter was thinking about, she writes, it was certainly not that of Ukrainians.

It was not that bad, she mentions, and President Poroshenko’s address was heard, together with a moment’s silence and the Ukrainian anthem whose words about Ukraine having not yet perished, and its vow to lay down heart and body for freedom had become imbued over this last year with such poignancy.

However on both sides of that address Inter viewers were ‘entertained’ by a number of Russian singers notorious for their anti-Ukrainian sentiments, such as Iosif Kobzon, Nikolai Baskov, Valeria, and Oleg Gazmanov.  Kobzon who openly demonstrated support and performed for the Kremlin-backed militants in Donbas was declared persona non grata in Ukraine in summer, and has also been banned from entering Latvia. 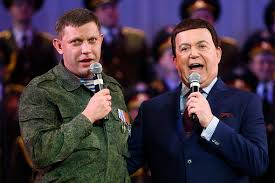 Kobzon and head of the so-called ’Donetsk people’s republic’ Alexander Zakharchenko, after the ’pseudo-elections’ of Nov 2 which were condemned by Ukraine and international community

Dolzhenkova says that even more questions are due the head of the Inter Media Group and member of the channel’s supervisory council Hanna Bezlyudova who appeared on the screen against the background of this programme with a glass of champagne and New Year greetings.

Disgust was immediate, among others, from within Inter.  Oleksy Likhman, presenter of the Podrobnosti news programme publicly condemned the New Year presentation as “shameful”.

Inter has an extremely spotted reputation which this latest scandal can do nothing to improve.  Aside from one brief period of respite, the channel was one of the worst propaganda vehicles during the entire period of Viktor Yanukovych’s presidency, and its record since has remained mixed.  At the beginning of 2014, the Maidan Council felt compelled to call on ‘ordinary Ukrainians and politicians’ to boycott Inter because of its biased coverage.  In a particularly moving outburst by journalist Lidia Pankiv the day after the gunning down of peaceful protesters, including some of her friends, on Institutska St in Kyiv, Pankiv told the presenter and Inter journalists in general that they had blood on their hands.

Debate has been heated over an appropriate response to the Inter concert – or, indeed, whether any response (aside from boycotting the channel) can be justified.

New head of the National Security and Defence Council, Oleksandr Turchynov demanded on Jan 2 that the channel be stripped of its licence.  and, as mentioned, the Broadcasting Council is due to meet to consider whether legislation was observed during New Year television broadcasts on Jan 15.  This meeting is likely to be attended by members of the Security Council and SBU [Security Service], and hopefully journalists and members of civic groups will also be present.  Prominent media commentator and chief editor of Telekritika told Radio Svoboda that there are grounds for discussing Inter’s information policy, though they do not lie in the specific material that has caused such an outcry. Ligachova points out that just a few hours earlier Inter broadcast material from the channel Rossiya 1 whose virulent anti-Ukrainian warmongering, distortion of information and propaganda have led it to it being banned in Ukraine.

Interestingly, ‘information policy’ minister Stets is reported to have stopped short of calling for the channel to lose its licence, saying that this could be construed as pressure on a television channel.

It could certainly be so construed, and not only by the channel which has complained of pressure.  Inter has stated that it awaits “‘clarification of the situation from the authorized state bodies dealing with television and law-based regulation of such situations since they will arise until rules are established regarding presentation in Ukrainian broadcasting of concerts and other forms of entertainment.”

The concert in question was surely ill-chosen and the participation of a number of Russian performers extraordinarily inappropriate.  There was almost certainly no violation of Ukrainian legislation as it currently stands. Unlike the Inter news broadcasts during the EuroMaidan protests, there was no manipulation of public opinion and straight out lies and deception.  Virtually nobody has even been prosecuted for the crimes committed during EuroMaidan and any consequences for systematically misleading viewers have consisted only of job losses.

However obnoxious the individuals who took part in that New Year concert, however questionable the decision of those within Inter to show it, viewers could turn over to other channels. Any excessive moves now to strip a channel of its licence for actions which were in appalling taste, but not illegal, would be a highly retrograde step, a move from the freedom in defence of which so many lives were lost during Euromaidan..