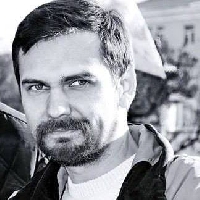 Luhansk journalist and chief editor of the Internet public Polityka 2.0, Serhiy Sakadynsky is apparently free after being held by Kremlin-backed militants from the self-proclaimed ‘Luhansk people’s republic’ though there are some very strange aspects to the story.  According to his wife, Mariya Havak, who was herself held hostage until Oct 1, Sakadynsky was first help prisoner for 3.5 months by fighters, and then kept under the guard of the so-called ‘LPR interior minister’.

Telekritika reports that Sakadynsky was only released on Jan 5, but had recently not been considered a prisoner.  He was supposedly held as witness in a ‘criminal case’ over his unlawful detention by one of the ‘LPR’ battalions. He and some others – first 12, then 4, were allegedly not released out of concern for their safety.

This does come after bloody conflict between opposing factions among the Luhansk militants and the killing of Alexander Bednov, nicknamed &#146Batman’ and members of his militant battalion. The men were reportedly killed when ‘LPR’ ‘security forces’ tried to arrest them on charges of murder, abduction and numerous crimes.

Havak says that the first 3.5 months he was held by a ‘swift response unit’ within the &#146Batman&#146 battalion.  In November he was moved to the ‘LPR military command&rsquo; where he was assured that they would try to find out why he had been held so long.  He was released from ‘Batman&rsquo; custody on Nov 13, and moved to the so-called ‘LPR interior ministry&rsquo;. </p><p>Havak has stressed that her husband was not a prisoner for the final month and a half, yet asserts that she has no idea who decided to release him and why.</p><p>It is perhaps noteworthy that she talks of the prosecutor&rsquo;s office and other structures within the LPR without any suggestion that these are self-proclaimed outfits.  The ‘LPR&rsquo; has been labelled a terrorist organization by the Kyiv government and even Russia, which is widely believed to be heavily funding it, has stopped short of formally recognizing it.</p><p>Sakadynsky&rsquo;s family is also reported to not know ‘what plans&rsquo; members of the ‘LPR&rsquo; have with respect to the journalist and it is this which may perhaps explain Havak&rsquo;s reticence.  She explains that they themselves don&rsquo;t fully understand how to go on from here.  She adds that her husband has not had to sign any undertaking not to leave the territory under ‘LPR&rsquo; control and they do not know whether they will remain in Luhansk.</p><p>It is customary for a normal prosecutor or court to demand a signed undertaking to leave the city.  In the present situation, after 5 months in confinement, both Sakadynsky and his wife would surely be wary of saying anything likely to change the month of his former captors.</p><p>There were varying accounts of the disappearance of Serhiy Sakadynsky, who also heads the Luhansk Eastern Ukraine Centre.</p><p>It appears that he and his wife, Mariya Havak were seized on Aug 2 at their dacha near Hostra Mohyla in the Luhansk oblast.  The couple arrived at the dacha to find that their car had gone.  This, it transpired, had been seized by the militants who in the process discovered what for them was ‘incriminating evidence&rsquo; against them.  These included a Ukrainian flag and supposedly some kind of documents proving that Sakadynsky is an ‘honorary activist of the Luhansk EuroMaidan&rsquo;.</p><p>Mariya Havak was released on Oct 1.  She was able to see her husband that day.  He told her that the accusations from these documents which caused his capture were not proven true, yet he has still not been released.</p><p>Sakadynsky&rsquo;s conflict with the Luhansk militants began on July 6 when they detained him and a colleague supposedly trying to photograph a ‘military object&rsquo;.  The militants then appeared at his home, removing all electronic equipment except mobile phones.</p><p>Other hostages</p><p>The supposed concern from the ‘LPR&rsquo; that Sakadynsky had been imprisoned for so long is at very least ingenuous given <a href="https://khpg.org/1419767505">the 500 or more people known to be held hostage</a> by pro-Russian militants.</p><p>Halya Coynash</p></div> </div></div> </div> <div id='soc'><span class='icon'><script src='https://khpg.org/plugins/soc/soc.js' type='text/javascript'></script></span> <span>&nbsp;Share this</span></div> <div class='clearfix'></div> <footer> <div class='wrap'> <div id='news_chanal'> <a href='https://khpg.org/en/registration'> <img src='https://khpg.org/skin/img/newsmail.png'> NewsMail Subscribe</a> <a href='https://khpg.org/en/news.xml'><img src='https://khpg.org/skin/img/rss.png'> RSS Feed</a> </div> <div id='site_warning_bottom'>For reprinting a link to the source is required. The thoughts and reasoning of the authors do not always coincide with the views of the KHPG members<br><b>&copy;&nbsp;2021&nbsp;khpg.org</b></div> </div> </footer> <div id='popup' class='modalDialog'> <div> <a title='close' class='close' onclick='popout();'>x</a> <div id='popup_content'></div> </div> </div> </body> </html><script> $(function() { $(window).scroll(function() { if($(this).scrollTop() > 200){$('#toTop').show();} else {$('#toTop').hide();} }); $('#toTop').click(function() {$('body,html').animate({scrollTop:0},400); }); }); function swich_tree() { if($('#tree_swicher').attr('src')=='https://khpg.org/skin/img/tr_p.png') { $('#menu ul ul').slideDown(500); $('#menu ul a').addClass('open'); $('#tree_swicher').attr('src','https://khpg.org/skin/img/tr_a.png'); } else { $('#menu ul ul').slideUp(500); $('#menu ul a').removeClass('open'); $('#tree_swicher').attr('src','https://khpg.org/skin/img/tr_p.png') } } $('#menu ul a').click(function(){ if($('#tree_swicher').attr('src')=='https://khpg.org/skin/img/tr_a.png'){ $('#tree_swicher').attr('src','https://khpg.org/skin/img/tr_p.png'); } }); </script>