Russian students examined on ‘Ukraine as threat to national security’ 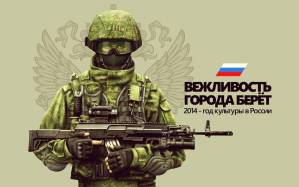 Students studying constitutional law in Russia’s Kuban State University are asked in one course to answer an exam question on “Ukraine as threat to national security”.

This pedagogical gem was reported by Boris Vishnevsky, a Russian opposition deputy in the St. Petersburg Legislative Assembly who rightly points out the upside-down picture of the world which students are receiving.  This is a world in which Russia annexed Crimea, a part of Ukraine in international law and according to Russia’s own international agreements, yet Ukraine poses a threat to national security. 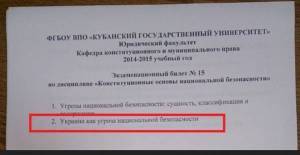 It is also a world, as three young people from Kuban have learned to their cost, in which ‘federalization’ is part of what Russia is ‘insisting on’ for Ukraine with armed seizures of government buildings in eastern Ukraine treated as expression of the people’s will in Ukraine while peaceful demonstrations in support of greater autonomy, no more, are treated as ‘terrorism’ in Russia.

Three Kuban activists have been placed on Russia’s List of Extremists and Terrorists for planning a peaceful march in support of greater federalization for Kuban.  Two are in hiding, with one - 21-year-old Viacheslav Martynov – seeking political asylum in Ukraine, while left-wing activist Darya Polyudova has been in detention since August 15 and could face five years imprisonment (see: Federalization as a terrorist act).

There is, of course, a lot more to Russia’s topsy-turvy view of the world and Vishnevsky highlights only some.

Moscow, for example, is providing ‘separatists’ in the east of Ukraine with arms, even missiles, and is doing nothing to prevent recruitment of mercenaries or so-called ‘volunteers’, despite this being illegal according to Russia’s own legislation.

It is Russian nationals who led the armed separatist revolt in the Donetsk and Luhansk oblasts.  He mentions Igor Girkin [known by his nom de guerre Strelkov] who is freely wandering around Russia and giving interviews.  As reported here, Girkin was for a long-time the ‘defence minister’ of the so-called ‘Donetsk people’s republic’ and has been identified by US officials as working for Russia’s GRU military intelligence service.

Other prominent Russians include Alexander Borodai who has also returned to Russia after acting for a long time as ‘prime minister’ of the ‘DPR’.  He worked in PR in Russia and, like Girkin, actively contributed to the ultra-nationalist Russian newspaper Zavtra.   It is not clear whether Vladimir Antyufeyev, a Russian who served as the Russian-supported region Transdniestria’s KGB chief and ‘state security minister’ from 1992 to 2012, is still in Donbas.  There was also Alexander Proselkov,   ‘deputy foreign minister’ and aide to the ‘People’s Governor, Pavel Gubarev, who was shot and killed, probably accidentally, by other militants on July 31.  Proselkov was a Russian national and member of the neo-fascist International Eurasia Movement and Eurasian Youth Union.

Russian soldiers are being killed in Ukraine, with their death concealed and their families under pressure to keep silence.  These soldiers are supposedly ‘on leave’ or are reported to have been killed ‘during exercises’, most often in Rostov (more details here: Russian soldiers’ deaths in Ukraine: A web of lies and fake social network pages

Vishnevsky says that you would need to be totally zombified by Russian propaganda to seriously believe that it is desperate Donbas residents who are opposing the Ukrainian army, and not camouflaged regular units of the Russian army.

As well as the standard range of epithets used by Russian propaganda in talking of a ‘Kyiv junta’ and ‘fascists’, Vishnevsky points to the description of the Ukrainian army defending their own country as ‘butchers’ / engaged in a ‘punitive operation’.  Just think, he comments, what Russia has done in Chechnya.

It would, indeed, be well for this to be elaborated more often.  Over the last two months Chechen homes have been burned down and entire families of suspected militants driven out.  A simple check of the European Court of Human Rights HUDOC search page will find a long list of judgements against Russia over the extrajudicial killings, disappearances, rape etc. of civilians in Chechnya, Ingushetia and other parts of the Caucuses.

“Let us note: Ukraine has not taken one square metre of territory from Russia; Ukrainian soldiers and Ukrainian civilians are not fighting on Russian territory; Ukraine is not supplying Russian separatists with arms and is not calling the Russian government ‘fascists’ and ‘a junta’.  Yet Kuban students (and probably not they alone) are taught that Ukraine presents a threat to Russia’s national security, and not vice versa”.

Good to end on that damning expose of surreal distortion, but the latter, it transpires, recognizes no borders.  In the last days France’s President Francois Hollande has publicly called for an end to Europe’s ‘threatening’ Russia with sanctions.