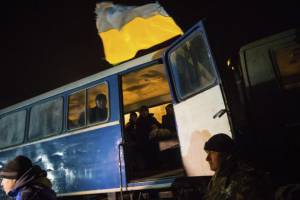 The good news is, first, that the reports which sped through the Internet on Dec 30 about the supposed suicide of one released Ukrainian soldier and castration of others while in captivity had no substance.  The second positive sign is that following angry response from Euromaidan SOS and other civic activists, Ukraine’s SBU [Security Service] may have decided not to bring criminal charges.

It remains extremely disturbing that the SBU should have announced on its official website that a criminal investigation had been initiated against a Ukrainian who “circulated knowingly false information about Ukrainian soldiers and members of volunteer battalions” held for some time as hostages.

The SBU claimed that “the information which does not have basis in fact was circulated through social networks in order to mislead the Ukrainian public”.  The criminal investigation was under Article 259 § 1 of the criminal code.  This is about “knowingly false information about a bomb, arson or other actions involving death or other grave consequences” and could lead to 6 months imprisonment.

Yelena Suetova is a volunteer who wrote about the released soldiers on her own Facebook page.  She certainly suggested that some of those soldiers released a few days earlier had been castrated and that one of them had committed suicide.

Those details were pulled out of a longer text and ‘reported’ on a number of Internet media outlets and very widely circulated.  On the same Facebook page she even complained, good-humouredly, that she had been quoted without her permission and that journalists had twisted her words, claiming that she was asserting that the soldiers had been castrated.

The journalists had clearly not spoken to her and probably to nobody else before they reported the alleged ‘assertions’ which were in turn widely republished and retweeted, with the lack of any evidence whatsoever concerning nobody.

The Defence Ministry was swift to refute the information saying that all 157 former PoWs were alive and well.

It is doubtless true that Suetova’s remarks were ill-considered and should have been checked before being reported on a page that could be read by anybody.  This was, however, clear to any journalists who re-posted her Facebook page remarks.  Simply stating that somebody says something is not responsible journalism.

The SBU’s behaviour remains disturbing.  The information was on Suetova’s own Facebook page and there is simply no reason to believe that it was written to mislead the public, or even that she knew it to be false.

The SBU’s Markian Lubkivsky then reported the criminal investigation on his Facebook page ending with the warning to “not play into the hands of the enemy, that can end badly”.

Following public and private bemusement at the SBU’s action from the civic initiative Euromaidan SOS and, doubtless, other activists, it seems that Markivsky has apologized to Suetova, and promised to ‘defend’ her.  The report at present remains on the SBU site, and it will be interesting to hear what the ‘chat over a cup of tea’ on Jan 12 will entail.

Unchecked reports, especially with such horrific details, can be damaging and highly disturbing to other soldiers defending their country and the need for immense care is undisputed.  For better or worse, however, Ukraine’s leaders have not declared a state of war during which draconian restrictions on freedom of speech may be imposed.  Ukraine has too much experience already of inappropriate manipulation of criminal investigations by the SBU and other enforcement bodies, and it is surely not just one young volunteer whose behaviour was ill-considered on this occasion.