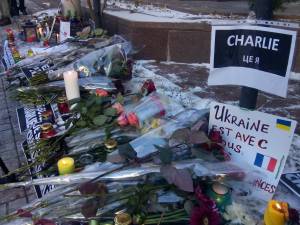 Outside the French Embassy in Kyiv

Ukrainians have joined with people in France and other countries in mourning the journalists of the French satirical journal Charlie Hebdo and policemen murdered on Wednesday.  Among them are Said Ismagilov, Mufti of Muslims of Ukraine, and his words deserve to be heard by all those of us whose first reaction was to show solidarity with the slain journalists by publishing Charlie Hebdo cartoons, including those of Muhammad.

After expressing sympathy to the families of those murdered, Said Ismagilov writes that although the journal published cartoons of the Prophet Muhammad “which undoubtedly offends the religious sentiments of Muslims, such issues must be resolved in a civilized fashion, within the legal framework of each specific country.” 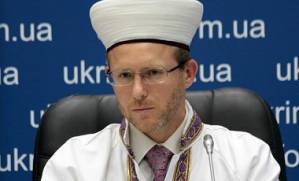 He says that Islam forbids violence, murders and lawlessness and says that, therefore, “today’s crime has been a shock to the entire European Muslim community”.  “Even if it turns out that the criminals consider themselves Muslims, we Muslims of Europe condemn such actions.”

While strictly true that until the culprits have been caught and their guilt proven, it cannot be confirmed that they were Muslims, and that they targeted Charlie Hebdo because of its often irreverent cartoons, few would agree with Said Ismagilov that we don’t know whether the criminals were Muslims, and whether the attack was linked with the cartoons or with France’s foreign policy.  The murderers’ behaviour, their shouts that they had “avenged the Prophet Muhammad” and their targets leave little doubt.

A number of publications in other countries have clearly drawn such conclusions and posted the front page of Charlie Hebdo with the cartoons pixelated – presumably to avoid being themselves targeted.  The reaction from many other journalists and publications was, on the contrary, to express solidarity and demonstrate determination to not let these monstrous killers win by publishing those same cartoons.

“In the light of these tragic events, as Mufti of the Muslims of Ukraine I would ask people to not follow the calls from those proposing to publish cartoons of the Prophet Muhammad (peace be upon him!) in all countries. This is particularly relevant for Ukraine where mutual understanding and friendship between Muslims and all other Ukrainians is very important against the background of the information and armed war against our country. It seems in no way accidental that Khodorkovsky has called for the publication of cartoons of our prophet.

I ask all journalists, especially those whom I know personally, to show care and to not incite resentment within the country over the crimes of individuals.  I am willing to come to your TV channels, explain the position of Islam, answer your questions, and express sympathy on behalf of Ukraine’s Muslims.”

It is clear that in France Marine Le Pen, leader of the far-right National Front is already making use of Wednesday’s monstrous crime for her own political, anti-Muslim and anti-immigrant ends.

Russia and its puppet regime in the Crimea have been systematically pushing the idea that Crimean Tatars, the vast majority of whom have opposed Russia’s invasion and annexation of their homeland, are ‘extremists’.  Armed searches of the homes of Muslims, mosques and religious schools have been frequently carried out over the last 6 months and a major offensive has been underway against the Mejlis or representative body of the Crimean Tatar people.

Both in the Crimea and in those parts of Donbas controlled by Kremlin-backed militants, intolerance and persecution have been seen against all faiths except the Orthodox Church under the Moscow Patriarchate.

There is every reason to fear that Moscow and its proxies in Crimea and eastern Ukraine could also use such hideous crimes to try to divide Ukrainians and Said Ismagilov’s words are surely worth heeding.