“We don’t need a second Yanukovych!” 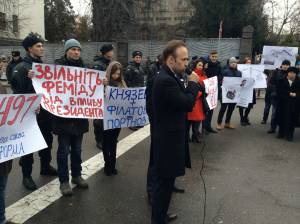 Protest on Jan 12 - one of the placards reads: "Free Femida, or the justice system from Presidential influence"

Concern is high over a bill proposed by the President’s Administration which critics believe would in fact give Ukraine’s president even more power than that assumed by Viktor Yanukovych during his four years as head of state.  “We don’t need a second Yanukovych”, Roman Kuybida, deputy head of the Centre for Political and Legal Reform told protesters on Monday.  Yanukovych destroyed any independence of the judiciary, he said, and President Petro Poroshenko is seeking through his bill to do the same instead of using legislation to help establish judicial independence from all branches of power.

The protest took place before a crucial vote on two bills, both of which ostensibly propose judicial reform.  The Verkhovna Rada possibly heeded the protests by passing both bills as a base, with the idea being that the two bills would be merged into one, taking the positive aspects of each.  It is to be hoped that this can be achieved, however the differences between the two approaches are major.

Bill No. 1497 on amendments to the Law on the Judicial System and the Status of Judges was registered on Dec 17, 2014 and drawn up by specialists and public figures from the Reanimation Package of Reforms.  Their aim is to strengthen the independence of courts and make them less susceptible to pressure from politicians and the court management.

Such amendments are desperately needed.  Even before Yanukovych’s presidency, the country’s leaders and politicians were all too inclined to exert pressure on the courts.  Some of the first ‘reforms’ following Yanukovych’s elections were aimed at increasing pressure on judges.  Their ‘success’ was seen not only in the notorious trials of political opponents, but in the fact that Ukraine’s already low rate of acquittals fell to nearly zero, with judges fearing bad consequences if they ‘annoyed’ the prosecutor by finding a defendant innocent. Those judges who towed the line were kept happy by, for example, not having to make their income declarations public, while some experienced meteoric career successes.

Draft law No.1656 , tabled on Dec 27, 2014, , was drawn up in the President’s Administration.  According to the Centre for Political and Legal Reform and others involved in the Reanimation Package bill, this bill, if passed, retains all the levers of influence established under Yanukovych and adds some.  They include the possibility to: dissolve courts; to sign the identification documents of judges and heads of courts even though the president has nothing to do with appointment of the latter; to accept oaths from all judges to loyalty to the president; and issue decrees transferring judges, including to all highest-level courts.  Lesya Shutko from the Human Rights Information Centre reports the result as being that “every step in a judge’s career will depend on the President”.

In earlier comments to Shutko, Roman Kuybida  points out that under the Constitution, neither the President, nor the Verkhovna Rada, have the power to transfer judges.  Their role is confined to giving them the status of judge, appointing them as judges and giving them indefinite tenure as judges [after 5 years].  The Constitution gives the President the right only to create courts, not to dissolve them.

Kuybida believes it would be better for judges’ appointment to a specific court, as well as any transfer, to be decided not by political bodies, but by bodies of judges’ self-government on the basis of a decision from the Qualification Commission of Judges.

Members of the Reanimation Package of Reforms [RPR] are critical also of plans in the presidential bill to introduce qualification classes and qualifying attestation of judges enabling their demotion or even dismissal.  They believe that with the High Qualification Commission already overloaded, they would either turn a blind eye to this, or this could be used in a selective fashion against judges whom the new regime wanted to get rid of.  This would be facilitated also by the lack of legal clarity as to the grounds for dismissal for infringement of oath.  The presidential bill says “the judge committed acts which disgrace the calling of a judge or undermine the authority of the justice system”.

The RPR bill, Shutko writes, clearly sets out the grounds for disciplinary proceedings against judges, including their dismissal for breach of oath.  She says that this would preclude any politically motivated decisions.

Worth noting that the term ‘infringement of oath’ and its use has been repeatedly criticized in assessments of bills by the Council of Europe’s Venice Commission, which points to the scope for abuse.

RPR members believe that the classification classes and attestation should be rejected and warn that they would undermine trust by judges themselves in the High Qualification Commission and from the public.  Worryingly, Shutko says that this innovation is supported by heads of the high courts – “those actively involved in drawing up the presidential draft bill”.   The innovation would make it possible to get rid of judges where there are no grounds for bringing disciplinary proceedings against them.

Former Constitutional Court judge Mykola Kozyubra is critical of any attempts to enlist judges to carry out judicial reform, as the Presidential Administration is doing.  The Administration has rejected the proposal from RPR to move away from having a separate system of economic courts.  They point out that these courts have gained the reputation of being the most corrupt body of the judiciary

Another direct clash in approaches can be seen with respect to congresses of judges resolving staffing issues.  The presidential bill proposes retaining a centralized procedure for their formation, whereas the RPR bill suggests forming the congress through election of delegates directly via assemblies of judges in each court.

The situation must also be eliminated and at present in the presidential bill is not where the heads of courts decide important issues.

Under Yanukovych, influence on judges was particularly effective through the power given the heads of courts.   It was the latter who were particularly instrumental in the repressive rulings, unwarranted detention orders, etc. during the months of the EuroMaidan protests and it was no accident that one of the key moves in cleaning up the judiciary was seen as being a total overhaul of the posts of court heads/ presidents.

The Law on judicial overhaul passed in early April 2014 resulted in all heads of courts and their deputies losing their administrative posts, though of course remaining judges of the relevant courts. The judge corps of each court gained the possibility to themselves elect the court heads and their deputies.  It did not, however, establish any methods for ensuring that the outgoing heads and deputies were not simply reinstated via a vote.  As reported earlier, it would seem that dirty methods were often applied to ensure that the same judges retained their posts: bribery; spoiling voting papers; pressure on judges. In many courts no alternative candidates were put forward with judges worried about negative consequences if they lost to the supposedly outgoing heads.  According to the head of Ukraine’s Supreme Court, Yaroslav Romanyuk, secret voting in courts at all levels resulted in 80% of the cases with court presidents retaining their posts.

The problems, therefore, are clear if any attempts to allow court presidents to retain their dominant role are allowed to slip into the final bill.  Ukraine’s recent history makes it just as plain that any efforts to grant elected political leaders power to influence the judiciary are highly retrograde.  It is difficult not to agree that those now in power need to be reminded that judicial reform should provide “a response to the main challenge which the public have charged them with – the usurpation by Yanukovych of the judiciary”.

They must not continue the usurpation.