Write to PACE: Nadiya Savchenko has been on hunger strike for 30 DAYS 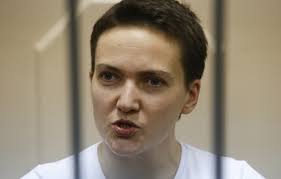 Nadiya Savchenko, Ukrainian MP and delegate to the Parliamentary Assembly of the Council of Europe has been on hunger strike in Russian detention since Dec 13.  The Russian authorities have moved her into a solitary cell and are blocking her contact with lawyers and her family.

29 days is already dangerous for health and Nadiya Savchenko, captured by Kremlin-backed militants and taken against her will to Russia, has stated that she will not end her hunger strike, saying that she has no other means of fighting her unwarranted detention and the absurd charges against her.

The former military pilot has been recognized by the Memorial Human Rights Centre as a political prisoner.  On Jan 6, US State Department spokesperson Jen Psaki called for the immediate release of Nadiya Savchenko, together with “other Ukrainian hostages held by Russia”, and mentioned also Ukrainian film director Oleg Sentsov.

This is excellent, but clearly not enough.  Nadiya Savchenko was elected to Ukraine’s parliament in Oct 2014 and has since been chosen to represent Ukraine in the Parliamentary Assembly of the Council of Europe [PACE], a body which Russia is also a member of.

PLEASE write to PACE President Anne Brasseur (who is visiting Kyiv this week) and / or PACE members now, asking that they raise the subject of Nadiya Savchenko’s illegal abduction to Russia and her detention there.

Stress the urgency of your appeal, given that Savchenko has not eaten for a month, and pass on key details about her case.

Ask that at very least Nadiya Savchenko’s detention in Russia is on the agenda for the first day of the next PACE session on Jan 26.

The following is only a suggestion.

I am writing to draw your attention to serious concerns regarding the health of Ukrainian MP, PACE delegate and former military pilot Nadiya Savchenko who was abducted to Russia in late June after being captured by pro-Russian militants in the Luhansk region of Ukraine.  Ms Savchenko has been on hunger-strike since Dec 13, and has stated that she will not end it until released.  The prison authorities are refusing to pass on letters to her, and her lawyers are being prevented from seeing her until Jan 12.  She is now understood to be in solitary confinement.

Ms Savchenko is facing criminal charges which have no substance over an alleged crime which her lawyers have demonstrated she could not have committed.  Her case has been studied by the authoritative Memorial Human Rights Centre which has declared her to be a political prisoner.  On Jan 6, US State Department spokesperson Jen Psaki called for her immediate release.

The following are brief details however more information can be found here, and in the links at the bottom of the page.

Ukrainian pilot Nadiya Savchenko was captured around June 17/18, 2014 by militants in eastern Ukraine [Luhansk oblast].  A video of her interrogation by these Kremlin-backed militants in Ukraine was published on June 20.  It is quite clear from that video that she has been taken prisoner.

On July 2 a court in Russia remanded her in custody until August 30.   The political motivation behind her arrest and detention is clear even in the court ruling which repeats verbatim the assertion in the investigators’ report that the alleged crime took place “on the territory of the Donetsk and Luhansk people’s republics”, entities which even Moscow has not recognized.

Savchenko asserts that she was taken by force, with a bag over her head and in handcuffs, across the border into Russia.

With no concern at all for credibility, Russia’s Investigative Committee has claimed that she entered, pretending to be a refugee and was arrested after being stopped in a routine check.

The investigators have even threatened to charge her with ‘illegally crossing the border’.

Russia’s Investigative Committee and the prosecution claim that, as a member of the Aidar Battalion, Savchenko passed on information about the whereabouts of two journalists from Russia’s Pyervy Kanal.  Igor Kornelyuk and his sound engineer  Anton Voloshin died on June 17 after being caught in shellfire while travelling close to militants of the self-proclaimed Luhansk people’s republic.  Despite immediate reactions from Russia’s Foreign Ministry and government-controlled media, there is nothing at all to indicate that the two men were in any way ‘targeted’.

Nadiya Savchenko was elected to Ukraine’s parliament in October and has therefore resigned from the military.  She was, however, a Ukrainian officer when taken prisoner by the militants making Russia’s refusal to release her under the Minsk Agreement in clear breach of that accord.

Her health and, soon, her life, are in danger because of a hunger strike she has gone on in the absence of any hope of a fair trial in Russia.

The Russian authorities are remaining silent about Nadiya Savchenko’s case and her hunger strike.

I would respectfully ask that you raise, as a matter of urgency, the case of Nadiya Savchenko both with your own government and with colleagues in the Parliamentary Assembly of the Council of Europe.

Office of the PACE President,

Other members of the Human Rights Committee