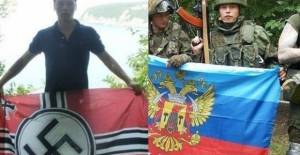 From torturing puppies and calling on fellow neo-Nazis to kill down-and-outs and animals in St. Petersburg, Alexei Milchakov turned to killing Ukrainians in Donbas.  Graphic pictures of his time fighting together with Kremlin-backed militants can be found on his VKontakte page – “Alexei Milchakov - Russia’s Pride and Glory”

At his last press conference, Russian President Vladimir Putin ignored a direct question about Russian soldiers fighting and dying in Ukraine, speaking only of “people who at the call of their hearts fulfil their duty or voluntarily take part in some military action, including in the south-east of Ukraine”.  There has been a determined drive in Russia over recent months  to push the line that there are only ‘volunteers’ fighting in Ukraine.  This is even the unconvincing refrain from another Russian -  Igor Girkin (nom de guerre: Strelkov), former ‘defence minister’ of the self-proclaimed ‘Donetsk people’s republic’ and identified by US officials as working for Russia’s GRU military intelligence service.

This constant narrative about committed volunteers clashes with the mounting evidence of the deaths of Russian soldiers in Ukraine; of Russian conscripts and contract soldiers being made to go to Donbas; and of significant deployment of Russian forces, together with sophisticated military technology, against the Ukrainian military.

Here, however, we present one Russian who almost certainly needed no coercion to join the action in Donbas.  Alexei Milchakov recently told the pro-militant TV channel Anna-News that he had been fighting in eastern Ukraine since the end of June.  News that Milchakov was probably in Ukraine had been reported in early July, with even Russian media sources extraordinarily blunt in their description of this young man led by Putin’s ‘call of the heart’ to Ukraine.  Moskovsky Komsomolets, for example, reports that “A Fascist – Butcher from Petersburg has gone to fight for the insurgents”.  The paper calls him a “well-known Russian maniac”, nicknamed ‘Fritz’, who gained notoriety in 2012 when the 20-year-old posted images of himself with a puppy whose head he cut off and ate. “After that Milchakov constantly posed with Nazi banners and called on people to kill down-and-outs and dogs”*.

This, then, was the person interviewed as one of the ‘heroes of Novorossiya’ on Anna-News.  His position, it should be said, is not completely secure but this has nothing to do with his Nazi views nor his monstrous sadism.  Since September Milchakov has led the ‘Rusich’ unit which was part of the ‘swift response group’ or battalion under Alexander Bednov, otherwise known as ‘Batman’.  Batman and a number of his men were killed on Jan 1 when, according to the website of the so-called ‘Luhansk people’s republic’, they resisted attempts to arrest them for murder, abduction and robberies.  Milchakov and other militants from Batman’s battalion claim that Batman’s cortege came under attack and that this was orchestrated by the current leader of the ‘LPR’, Igor Plotnitsky because Batman was getting in the way of Plotnitsky’s drug-trafficking racket.

One commentator notes that back in Spring 2014 when Ukrainian journalists wrote about Donbas being seized by bandits engaged in looting, racketeering, torture and drug-trafficking, supporters of the so-called Novorossiya were outraged, calling this Ukrainian slander of the ‘people’s’ republics.

Now warring groups within the ‘LPR’ are saying the same and worse about each other, and one lot stand accused of deliberately killing another faction. Counter-claims confirm all reports about horrific torture in ‘LPR’ captivity.

The same commentator points out that Anna-News has authority and wide readership among supporters of the militants and therefore Milchakov’s ‘hero of Novorossiya’ status may remain intact for the time being.

This is not the first bout of infighting, and it remains a moot question who will finally take control.  The rhetoric is, however, unlikely to change, with neo-Nazi sadists like Milchakov, Novorossiya supporters like Poland’s Dawid Hudziec or far-right Falanga leader Bartosz Bekker all adamant that they are opposing the ‘fascist’ ‘Kyiv junta’.  While Milchakov has learned to hold his tongue about Nazi sympathies, the same cannot be said for his followers.  In one chat on Aug. 8, participants show no restraint in their anti-Semitic ravings, with one Innokentiy Chetvergov suggesting that Hitler killed too few Jews. “We need to rectify the mistakes of history”.

Some readers would doubtless retort that there are some Ukrainian fighters, including the entire command of the ‘Azov’ volunteer battalion, whose neo-Nazi views are profoundly disturbing.  They certainly are, however there remains a fundamental difference:  ‘Azov’ fighters are defending their own country, not coming to fight for some ‘Russian world’ ideas in a foreign country.

An exception here is the case of Belarusian far-right thug, Sergei Korotkych who should never have been granted Ukrainian citizenship.

Those in the Kremlin hoping that volunteers following the ‘call of their heart’ will divert Russians’ attention from the ever-increasing number of Russian soldiers returning home in coffins, and from questions about who is footing the bill for its dirty undeclared war, should choose their ‘volunteers’with greater care.  The list of heartfelt supporters of notorious Russian fascist Alexander Dugin, the neo-Nazi Russian National Unity Party and various anti-Semitic, migrant-bashing other Russian ’nationalists’ is long, but they could certainly start with Milchakov, St Petersburg neo-Nazi sadist on the prowl for maximum blood and violence.