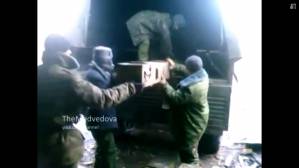 Reports of renewed fighting in Donbas “virtually on all frontlines” and large amounts of new military equipment come soon after the latest video suggesting highly sinister – or just lethal – contents inside the latest so-called ‘humanitarian convoy’ from Russia.

A video posted on Jan 8 apparently shows militants unloading what they term ‘New Year gifts’ for [President] Poroshenko, [Radical Party leader Oleh] Lyashko and ‘Rabbit Senya’, referring presumably to Prime Minister Arseniy Yatsenyuk.  The ironical commentary, heavily peppered with expletives, as well as the appearance of the long crates being removed makes it abundantly clear that the militants are unloading weapons.

There have been reports for several days now that shelling has resumed of Donetsk, especially areas near the airport.

Sergey Kosyak, a Donetsk Pastor who has been tirelessly working to help both those trying to flee the fighting and those who have remained reported on Mon Jan 12 that a lot of military technology and missile equipment have appeared in Donetsk and Horlivka  and that fighting has resumed on virtually all fronts.  Said Ismagilov, Mufti of the Muslims of Ukraine, who is also from Donetsk quipped bitterly:  “Yes, a convoy’s arrived – they say that it’s brought products.  What kind of products we can already hear”.

The word ‘produkty’ in Russian normally refers to food items which are in scarce supply in those areas now under militant control, after many months of fighting. The work carried out by Sergey Kosyak’s groups and others are therefore of critical importance in areas facing a real humanitarian catastrophe.

Many are now trapped and unable to leave Donetsk. The work they are doing is truly dangerous.  Two days ago Sergey Kosyak reported that one of the people who had been taking around the food products that they are managing to bring in was shot dead.  He had taken the food and set off on his round, but did not return.  His body was found the next day - he had been killed by shrapnel from a mine.  They had once talked about why he had stayed – he answered to protect homes from looters and to feed the dogs who’d been left behind.  His widow remains in Pesky – she has taken over the deliveries of desperately needed food aid.

Russia’s lethal ‘humanitarian convoy’ was the eleventh so far, with effectively none of them having ever been checked.  They are carried into Ukraine across part of the border under Kremlin-backed militant control.

On December 25, the head of the Moscow office of the Russian Red Cross was reported as saying that the Russian government was probably using these so-called ‘humanitarian convoys’ to supply arms to the militants in eastern Ukraine.  There is, however, some controversy over the report with Igor Trunov later denying having made the allegations.

While it was startling that a Red Cross official from Russia should have been so open, the International Red Cross has from the outset expressed concern about these convoys and the false claims from Moscow that they had been coordinated with the Red Cross.

There are also fairly regular reports from both the Donetsk and Luhansk oblasts that food items are seldom given away, but end up on the black market.

Unless, of course, there are propaganda requirements.  On Nov 2, 2014, the day of the illegal ‘elections’ organized by the self-proclaimed Donetsk and Luhansk ‘people’s republics’, huge amounts of onions, carrots, cabbages and potatoes were sold at the ‘polling stations’ at extremely low prices as the reward for taking part in ‘elections’ recognized only by the representatives of far-right parties whom Moscow paid to act as ‘observers’ (see An ’Election’ amid Kalashnikovs, cabbages and Moscow’s fascist fans),

There are also serious grounds for believing that some of the trucks regularly crossing illegally into Ukraine have been used to take back the bodies of Russian nationals killed fighting Russia’s undeclared war against Ukraine.

In short, anything but humanitarian.