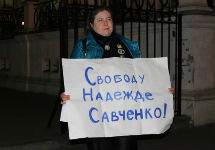 On the 33nd day of Nadiya Savchenko’s hunger strike, four people planning a protest outside the remand prison [SIZO] in Moscow were detained on Wednesday morning and taken to a police station.  A lawyer from the Movement for Human Rights was allowed in to see the four, who included Alexandra Ageevka, a Grani.ru correspondent planning to film the protest.

The human rights monitor OVDinfo was told by one of the detained activists, Oleg Moryakov that men in camouflage ordered them to leave the car where they were listening to (or, according to another report, singing) the Ukrainian national anthem and forced them into a police bus from where they were taken to Pechatniki police station.

The four are: Oleg Mokryakov; Yekaterina Maldon; Ivan Dudko and journalist Alexandra Ageeva. All had their telephones taken away [though presumably Mokryakov had another since he was able to inform OVDinfo].  At the police station, they were all taken to different rooms and searched.  Lawyer Alexei Domnikov was prevented from entering although he has power of attorney to represent Yekaterina Maldon. Later in the afternoon, OVDinfo reported that only Maldon remained in custody, and that the police had returned Ageevka’s video but wiped the tape on it.

According to Russian law, any protest except a single person picket is illegal unless sanctioned by the authorities with the latter more often than not refusing to provide such ‘permission’.  The four people however were sitting in a car…

They were, however, outside SIZO-6 where Ukrainian MP and delegate to the Parliamentary Assembly of the Council of Europe [PACE], Nadiya Savchenko has been on hunger strike now for over a month.  The former military pilot was taken prisoner by Kremlin-backed militants in the Luhansk region of eastern Ukraine and taken against her will to Russia where she has been imprisoned ever since.

A petition is underway here https://change.org/p/president-pace-anne-brasseur-urge-russia-to-release-nadiya-savchenko calling on the President of PACE Anne Brasseur to issue a public statement calling for Nadiya Savchenko’s release.  Such calls have already been made by the US State Department and effectively by the authoritative Russian Memorial Human Rights Centre which has stated clearly that Savchenko is a political prisoner.

The appeal also asks that Nadiya Savchenko’s case be raised at the next PACE session which begins on Jan 26.  This is imperative since the Russian authorities are trying to avoid uncomfortable questions being asked.

These questions are critical and need to be publicly raised.

Savchenko was captured by the militants in Ukraine.  Russia’s Investigative Committee has claimed that she entered Russia – in camouflage gear! – claiming to be a refugee and was only later arrested when stopped for a routine document check.  It conceals all information about her capture by militants although there is a video available of her interrogation between June 18-20.

The investigators have provided no evidence to back their allegations.  Since evidence proving that she could not have committed the crime she is accused of, questions are clearly vital as to why she remains in SIZO.

Savchenko declared hunger strike on Dec 13 and has stated that she will continue it to the end.  The prison authorities are keeping her in solitary confinement and she has not been allowed to receive any letters for the last two months.

PLEASE help ensure that PACE intervenes over this monstrous violation of Nadiya Savchenko’s rights by signing and circulating the above petition!

For Nadiya Savchenko’s letter and more details about her capture and imprisonment, please see: Nadiya Savchenko will not end her hunger strike nor let them break her spirit