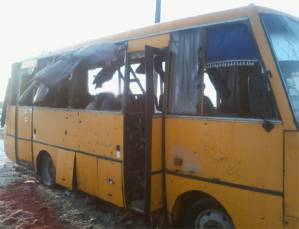 There was a sense of déjà vu on Tuesday night as Kremlin-backed militants and the Russian media went into overdrive attempting to prove that the shelling of a passenger bus near Volnovakha in the Donetsk oblast was somehow or other the fault of the Ukrainian military.  The same barrage of conflicting versions was seen after the downing of the Malaysian MH17 on July 17, with not dissimilar prevarication to conceal initial admission.  A day later there is no let-up in Russian media distortion, but there is one major difference.  All international bodies, including OSCE and Amnesty International, agree on the need for an objective investigation, yet carefully avoid any comment as to who was to blame.  The BBC and other western media reports present the Ukrainian side, then the militant denial, leaving out any detail about the labyrinth of different versions from the latter.

Many would question whether responsibility for Tuesday’s attack is any less clear than blame for the MH17 downing, however those with nothing to hide can only benefit from a full and objective inquiry.  The OSCE has announced that the militants and Russia will be included in the investigation, and it now remains for them to decide what happened.

Nonetheless, since even the details the OSCE has already confirmed are at variance with the many contradictory versions pushed by militants and Russian media, some attention to all positions seems warranted.

On Wednesday the OSCE’s Special Monitoring Mission issued a spot report from Volnovakha.  The report confirms that the bus was hit by shrapnel from a Grad rocket.  10 people were killed outright, 3 more died in hospital and another 16 people were injured.

The mission arrived after being told by the regional traffic police that “a Grad rocket struck close to a civilian bus when it stopped at a Ukrainian Armed Forces checkpoint approximately 2km north of Volnovakha (35km south-west of Donetsk).”

“The bus had shrapnel damage consistent with a nearby rocket impact, estimated by the SMM to be 12-15 meters from the side of the bus.”

This corresponds to a surveillance camera video (mounted on the Donetsk – Mariupol road) which can be viewed here: http://unian.ua/society/1031897-opublikovano-video-obstrilu-boyovikami-blokposta-pid-volnovahoyu-z-gradu.html

Ukrainian government and media reports on Tuesday also called this a direct hit from a Grad rocket, with all adamant that the rocket had been launched by pro-Russian militants based in the nearby town of Dokuchajevsk.  Ukrainian reports have largely differed only as to whether the civilians were killed by accident with the target being the Ukrainian army checkpoint, or were deliberately targeted.

The versions emanating from the militants and reported without any hard-hitting questions in the Russian media were much more confused and contradictory.

The militants claimed, for example, that the checkpoint was beyond the range of their artillery.  Exactly one day earlier, on the self-proclaimed ‘Donetsk people’s republic’ website they had boasted of hitting that same checkpoint.  Screenshots are available should the militants notice that not all media are as willing to accept their versions at face value as pro-Kremlin media sources.

On Tuesday, the Russian TASS press agency reported that “the shelling of the bus was on territory controlled by insurgents of the self-proclaimed Donetsk people’s republic”, citing quoted “a source within the DPR government” for this information.  The same source said that they weren’t idiots to shell their own territory.

That would indeed be idiotic, unlike assuming that TASS would not correct the obvious misinformation.  The bus was hit while stopped at a Ukrainian military checkpoint.

TASS also reports that “in the DPR defence ministry” they rejected any involvement by the insurgents, claiming this to be “a provocation from Ukraine”.

It does go on to mention that the Donetsk regional head of police asserted “the insurgents supposedly made a strike from Dokuchajevsk at a Ukrainian military checkpoint and hit a bus with civilians”, but then adds that the same head of police “asserted that the wounded had as a result of the shelling been taken to the Volnovakha district hospital. However in the office of the chief doctor of the Volnovakha Central District Hospital they couldn’t confirm this information”.

The TASS report at least mentions other ‘versions’, if only to discredit them.  The Russian language Russia Today cites TASS but reports only ‘DPR’ denials.

One particularly curious version supposedly comes from Igor Girkin (nom de guerre: Strelkov) former ‘DPR defence minister’ and identified by US officials as working for Russia’s GRU military intelligence service.  He claimed, at least initially, that there were no alternative versions, that the holes came from being shot at by firearms which they’d tried to present as artillery shelling. “I would add there are clear signs specifically of small calibre bullet wounds.  The fascists are trying to hide the truth, laying their latest crime on the insurgents”.

This same ‘military expert’ soon opted for another version which appears to be a favourite with Russian television.  In the version presented by Russia 24, the Ukrainian military are, of course, still to blame but the stationary bus was supposedly in fact turning when it hit a mine that the perfidious Ukrainians had planted.

“Military experts, having studied video footage from the place of the tragedy have come to the conclusion that this version [Kyiv’s about a Grad missile] is totally without foundation”.

The acting prosecutor of the ‘DPR’ claims that the damage was caused by a land mine. Lest this source be deemed less than objective, we learn from a certain “candidate of military sciences, expert from an association for systemic analysis Alexander Manachinsky, “it does not look like Grad”.

To give this version extra special weight, a sign is shown and even described, saying “Careful, mines!”.

How very unobservant of the OSCE’s mission not to notice.