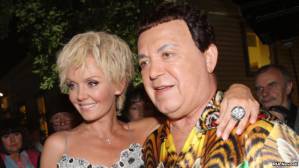 16 days after a New Year’s Eve concert with Russian stars notorious for their anti-Ukrainian views and support for Kremlin-backed militants, Ukraine’s Broadcasting Council has announced measures which include checks on possible financing of nationwide TV channels by individuals wanted by the police or believed to be supporting infringements of Ukraine’s territorial integrity.

The Broadcasting Council met on Jan 15 for a special session called after the New Year concert “New Year Parade of Stars 2015’ was shown on one of Ukraine’s main nationwide TV channels – Inter, as well as on Rossiya 1, a pro-Kremlin Russian channel.

Such concerts are often fairly mindless, but this one was also astoundingly offensive, mainly because of the participation of Russian singers – Iosif Kobzon, Valeria and Oleg Gazmanov, in particular.  All have publicly made derisory comments about Ukraine, supported Russia’s annexation of the Crimea and the Kremlin-backed militants in eastern Ukraine.  Kobzon is now persona non grata in Ukraine following his appearance together with the head of the so called ‘Donetsk people’s republic’ in Donbas, with the last time being on the night of illegal ‘elections’ condemned by Ukraine, the UN and western countries.

Inna Dolzhenkova, writing for Telekritika,  said that watching it, she almost expected them to interrupt the programme at 11 p.m.  - midnight in Moscow - to bring them Russian President Vladimir Putin’s New Year address.  Whoever’s taste Inter was thinking about, she writes, it was certainly not that of Ukrainians.

According to the head of the Broadcasting Council, Yury Artemenko, they received 254 letters which expressed varying levels of indignation over the concert on Inter, with only three letters in support of the channel.

This may have just been statistical information from the Broadcasting Council. If, as one suspects, it was supposed to justify intervention over the showing of this or that entertainment programme, it does not.  It is those who are outraged – and who probably believe the State should do something about the situation – who write to a Broadcasting Council.

The Council in fact checked all nationwide channels and found that others had also included Russians known for virulent anti-Ukrainian views during the holiday period.  Oleg Gasmanov was also broadcast on TV 1 + 1 and Kobzon on TV Tonis, while TV Ukraina broadcast a number of articles “known for their anti-Ukrainian utterances”.  The Council almost notes that ICTV showed a cartoon with a main character’s voice that of Russian actor Ivan Okhlobistin whose claim to notoriety among Ukrainians is on a par with Kobzon’s.  Okhlobistin appeared in the militant-occupied part of Donbas last year, flouting a ban on his entry into Ukraine and handed presents to one of the militant leaders and his wife.

It should be stressed that these individuals are not just expressing support for pro-Russian militants, not Ukraine.  Their denial of Ukraine’s right to exist, extremely derogatory comments about Ukrainians are undeniably offensive.

Who this should be regulated by is the issue.

It was interesting that at the Council session on Thursday, representatives of 1 + 1 and Tonis both said that the material in question had slipped through effectively without being noticed. 1 + 1’s legal spokesperson Tetyana Smirnova, for example, called for the media to engage in self-regulation in not broadcasting people who supported Russia’s annexation of the Crimea or the activities of terrorists; who incite ethnic enmity or campaign against Ukraine.

The director of Ukraina, Yevhen Lyashchenko said only that they would refrain from ‘wrongly perceived appearances” on the screen, and was unable to be more specific.  Ukraina is owned by billionaire Renat Akhmetov, who was a major supporter and beneficiary of ex-president Viktor Yanukovych.  His failure to take a very strong stand over the conflict in Donbas has elicited criticism with some alleging that he is, if not aiding the militants, then not trying to hinder them.

Inter has consistently defended its position and complained of being placed under pressure.  There was also an attack on its offices shortly after the storm broke over its New Year programme.

The fact that the offending concert was broadcast on Inter was viewed by many observers as no coincidence.  Aside from one brief period of respite, the channel was one of the worst propaganda vehicles during the entire period of Viktor Yanukovych’s presidency, and its record since has remained mixed.

The respite, and revival of more or less critical journalism, came after the October 2012 parliamentary elections when Valery Khoroshkovsky, effective owner of the Inter Media Group broke with the ruling Party of the Regions.  It ended only a few months later when Khoroshkovsky sold the group to Dmitry Firtash and Serhiy Lyovochkin, head of Yanukovych’s administration.   During EuroMaidan it was one of the worst offenders for deliberate misinformation and manipulation of public opinion against Maidan.  In a particularly moving outburst by journalist Lidia Pankiv the day after the gunning down of peaceful protesters, including some of her friends, on Institutska St in Kyiv, Pankiv told the presenter and Inter journalists in general that they had blood on their hands.

The Broadcasting Council has stated that it will be asking the Prosecutor General’s Office, the National Security Council and SBU [Security Service] to check “within the boundaries of their competence” the possible possession or financing of nationwide broadcasters by people wanted in Ukraine or people who are aiding violation of Ukraine’s territorial integrity and / or inciting enmity.”

There has long been a need for legislation ensuring total transparency with respect to media ownership.  This, unfortunately, is not what the promised checks are about.

In earlier commentary on the scandal, well-known media specialist and head of Telekritika Natalya Ligachova said that the most critical thing was not whether in this case Inter had been simply out for good ratings with a lavish Russian concert or had had ulterior motives.  She named as issues which the incident had highlighted the lack of a culture of media social responsibility and absence of self-regulation in the media.  She does, however, also consider that there is a serious fifth column in the country serving the interests of Russia as aggressor state. A major problem, she considers, is the lack of political will in the country to engage in real protection of the interests of the Ukrainian public from the activity of the fifth column, rather than pretend defence.

It remains to be seen which category Thursday’s measures prove to be in.