Where is Nadiya Savchenko? Who is lying? 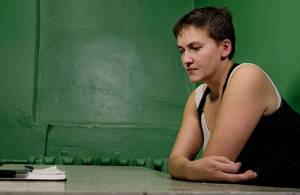 On Saturday one Kremlin-loyal TV channel reported that “Pilot Savchenko” has been moved to a special unit of another Moscow prison, after which several no less loyal media reported that the Federal Prison Service had denied this. Nadiya Savchenko’s lawyer Mark Feygin has tweeted that he is himself trying to ascertain what is going on.

Since these media are not known for independent journalism and the government-controlled media have largely suppressed information about Nadiya Savchenko’s hunger-strike, imprisonment and calls from western leaders for her release, the lack of coordination is at very least curious.

LifeNews reported that Savchenko had been transferred to a special unit of the Matrosskaya Tishina remand prison (SIZO) “in connection with the need for constant observation by doctors over the health of the suspect”. This, they claimed, was stated by “specialists from the Federal Prison Service”.

Worryingly, the report claimed that she had been moved to the infectious diseases unit of the SIZO, which could be used as a pretext for prohibiting visits.

The main concern, however, is that a transfer would be used to apply force feeding. Nadiya Savchenko has stated repeatedly that she would view any attempt at force feeding as torture. Feygin writes that she has threatened to rip out any tube.

Feygin immediately tweeted his bemusement that Savchenko’s lawyers should be learning of this from the media and stated that they would be demanding an immediate meeting with his client, as well as with the prison authorities where they would spell out the grave consequences of any attempt to force feed Nadiya Savchenko. He also mentioned that Vera Savchenko has received permission to visit her sister on Monday and suggested that she would be able to persuade Nadiya to give up her hunger strike, which she began on Dec 13 last year.

It is not clear whether Feygin’s comments were the reason that the Prison Service’s denial that Savchenko had been moved was given fairly prominent place in reports by RIA Novosti, TV Rossiya 24 and others. The LifeNews report was, late on Saturday evening, still prominent on their page and unchanged. It is to be hoped that Vera Savchenko will see her sister on Monday.

The sudden coverage given Nadiya Savchenko is curious given attempts over recent months to muffle the story. Aside from the one discrepancy which gave all media a pretext for mentioning her hunger strike, all the Kremlin-loyal media are similar in what they conceal or distort.

All are silent about the fact that Nadiya Savchenko is now a Ukrainian MP and delegate to the Parliamentary Assembly of the Council of Europe [PACE];

They conceal all mention of Savchenko’s capture on June 17 or 18 and repeat only the version given by the Russian investigators, including the claim that Savchenko was arrested after coming into Russia herself, pretending to be a refugee. This has been categorically denied by Savchenko herself, who says she was taken by force, in handcuffs and with a bag over her head, but also seriously strains credibility.

Not unexpectedly, they also conceal the two direct statements from the US State Department calling for Savchenko’s immediate release; the equally emphatic demands for the release of Nadiya Savchenko and “all illegally held” prisoners made in the Jan 15 European Parliament Resolution, and on Jan 16 by PACE President Anne Brasseur.

They are silent about the unequivocal statements from these bodies and others that Russia’s continued detention of Nadiya Savchenko, Crimean film director Oleg Sentsov and others is in breach of the Minsk Protocol, as well as international law.

As reported here, when asked about the release of Savchenko and Sentsov, Russian foreign ministry spokesperson  Alexander Lukashevich claimed to see no link between their cases and the Minsk Protocol and said that the latter refers to prisoners of war. The Minsk Protocol refers, as one would assume he knew, to the “immediate release of all hostages and illegally held persons”.

LifeNews has already once played a role in supporting Russia’s detention and prosecution on fabricated charges of Nadiya Savchenko. Its part in Saturday’s Russian media performance is less transparent, but neither LifeNews, nor any of the other channels that have suddenly reported this case, have given any grounds for suspecting them of independent reporting.

Russia Today, the English-language TV channel lavishly funded by the Kremlin and supposedly there to present the truth about events in Russia, has not once mentioned Savchenko’s case since Oct. 2, 2014.

The need for public attention to Nadiya Savchenko’s imprisonment and her hunger strike remains acute, and it is vital that all those details that Russia is attempting to conceal are passed to politicians and the international media.


Ideas for further action, together with brief information about other Ukrainians held in Russia on falsified charges can be found at: PACE President demands Savchenko’s release. Where next?