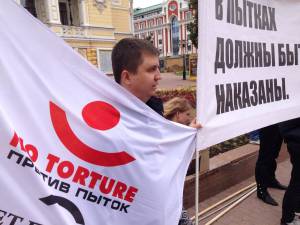 Russia’s justice ministry has forcibly added two more NGOs – the Committee against Torture in Nizhny Novgorod and the Memorial information and education centre in Yekaterinburg - to its notorious register of ‘foreign agents’.  As in other recent cases, at least one of the organizations has openly expressed concerns over Russian human rights abuses.

The Committee against Torture

Measures against the Committee began after its criticism of Chechen leader Ramzan Kadyrov’s response to the Dec 4 attack by militants on Grozny which left 14 police officers dead.  Kadyrov basically called for relatives of alleged militants to be exiled from Chechnya and for their homes to be destroyed. He is reported to have claimed that holding parents and neighbours answerable was in line with the ‘norms of Islam’.

Nor, seemingly, did he confine himself to words, with a number of homes of people suspected of involvement having been razed to the ground.  In the village of Yandi where several houses had been burned to the ground the BBC spoke to the owner of one of them.  She said that her son had joined the rebels two years before after having been detained twice, sentenced two times, and tortured many times.  She told them that it was this constant treatment that had prompted her son to join the rebels.  In fact, her son’s name was not on the list of militants involved in the attack, although not all those killed have been identified.

As reported, a draft bill was submitted to Russia’s State Duma on January 12 calling for heightened punishment of those convicted of ‘crimes of a terrorist nature against public security’ and extending criminal liability to parents and close relatives if they were deemed by a court to have provided assistance ‘in any form’ to militants.

Igor Kalyapin, head of the Committee reacted immediately to Kadyrov’s threats and turned to Russia’s Investigative Committee and Prosecutor General for their assessment of the Chechen leader’s words.

Soon afterwards a fire broke out in the Committee’s Grozny offices, and staff of the NGO were detained and searched.  On Kalyapin’s facebook page, he writes that the prosecutor’s statement read that members of the Committee had publicly circulated information about specific negative instances of police work and of the incompetence of the Investigative Committee.  In so doing, according to the prosecutor (O.Y. Ponasenko) they had tried to change state policy, and therefore the Committee against Torture was a ‘foreign agent’.

There is less of an overt cause and effect link in the branding of the Yekaterinburg Memorial a ‘foreign agent’, although the persistence with which the justice ministry has ignored previous court cases in the NGO’s favour and continued until an appeal court on Dec 22, 2014, found in the ministry’s favour.

The head of the NGO, Anna Pastukhova considers the move to be commissioned as part of repressive measures against inconvenient NGOs.  She is adamant that her organization will fight the decision all the way to the European Court of Human Rights, if necessary.

In December 2014, almost exactly 25 years after the death of Andrei Sakharov, physicist and Nobel peace laureate, the Sakharov Centre [officially the Public Commission for the Preservation of the Legacy of Andrei Sakharov] was forcibly added to the register of ‘foreign agents’, together with the Kaliningrad Human Rights Centre and Krasnodar Regional Organization of University Graduates.

Alexander Cherkasov from Memorial called the move against the Sakharov Centre “symbolic in its madness”, and pointed out that the unscheduled ‘check’ on the Centre began on Dec 13, the 25th anniversary of Andrei Sakharov’s death.

As reported earlier, although there is little information about the other two NGOs, it may be significant that the move comes soon after attempts to hold peaceful protests / calls for greater autonomy were crushed (see Federalization as a terrorist act).

There are now a formidable number of NGOs added against their will to this register, but perhaps the clearest motivation (before that of the Committee against Torture) was seen at the end of August last year with the branding of Soldiers’ Mothers in St. Petersburg a ‘foreign agent’.

This came at the end of a week in which the NGO had spoken out over Russian soldiers being killed fighting in Russia’s undeclared war in Ukraine. At the time, Amnesty International stated that “Russia’s official branding of a civil society organization as a “foreign agent”, an expression akin to “spying”, for speaking out on Ukraine is a sign of the country’s determination to suppress any information about its military activities there”.

There have been other measures against NGOs over the last 6 months or so.  In November the justice ministry began an unscheduled ‘check’ of one of Russia’s most well-known organizations, ‘For Human Rights’.  The NGO’s head Lev Ponomarev said that the check as to whether the rights organization should be forcibly labelled a ‘foreign agent’ had been asked for by the Prosecutor General’s Office.

In November 148 Russian and international NGOs addressed an open letter to Russian President Vladimir Putin demanding that the law ‘on foreign agents’ be revoked.  There has been no formal answer, however the latest moves appear to demonstrate that the Kremlin has no intention of renouncing laws like those on ‘foreign agents’ and ‘extremism’ which it uses to intimidate and weaken voices of protest, including those defending the most fundamental rights being flagrantly violated in the Russian Federation.