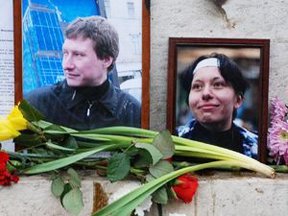 Well-known human rights lawyer Stanislav Markelov and 25-year-old Anastasia Baburova who was finishing journalism studies and working for Novaya Gazeta were gunned down in Moscow on January 19, 2009.  Traditional meetings in their memory are of particular poignancy in Ukraine, not only because Nastya Baburova was herself from Sevastopol in the Crimea, but due to the relentless Kremlin warmongering propaganda in the last year about supposed ‘fascist hordes’ in Ukraine. Both Markelov and Baburova were committed to fighting far-right terror and died at the hands of Russian neo-Nazis

It was Markelov’s work that most annoyed nationalists, however he had made plenty of other enemies, defending victims of rights abuse in Chechnya, of police violence and many others. In Jan 2009 he was representing the family of Ella Kungaeva, the 18-year-old Chechen girl raped and murdered by Russian colonel Yury Budanov.  Baburova, who was probably shot because she was with him, had met Markelov to interview him about his work and the Budanov case.

Initial scepticism when arrests were announced in Nov 2009 and fears that the authorities were finding an easy scapegoat faded as the evidence against two far-right nationalists became known.   In Nov 2011 Nikita Tikhonov, a member of the neo-Nazi and racist organization BORN [Military Organization of Russian Nationalists] organization was sentenced to life imprisonment for the murders.  His partner Yevgenia Khasis was jailed for 18 years for her part in the crime.

On the first anniversary of the killing, Nastya Baburova’s parents issued an open letter to those who had ordered and organized their daughter’s murder.

“It was a contract killing. You who ordered it needed to show that you are the bosses in the country. You therefore thought up that brazen killing during the day in the centre of Moscow in the presence of numerous witnesses as a demonstration of your strength, power and impunity….

If the killer had merely had a personal score to settle with Markelov, without carrying out your contract, he would have committed his dark deed far from people, without witnesses, usually near a gateway.  That option didn’t suit you. You needed to demonstrate that you can do everything. …

The combination of the ideologies of patriotism and fascism is increasingly permeating all layers of Russian society from below upwards. Neo-Nazis are now in the law enforcement agencies, in bodies of power and legislative structures. There is a real chance that fascists will come to power. You are preparing yourself a road to power, using weapons against unarmed anti-fascists and human rights defenders. After receiving real power, you’ll declare the present killers national heroes and therefore they’re convinced of their impunity.

We are in no doubt that the murderers of our daughter and Stanislav Markelov have been arrested. There is a method for identifying killings, the accuracy of which is as accurate as with fingerprints.

We turn to those who ordered and who organized the killing. Everybody understands that you won’t stop with this murder. After all you want to establish yourselves in the country and come to power precisely though such radical methods. When you plan the next murder of a journalist or human rights defender, at least find out the identity of these people.  Maybe you will just understand that these people are looking further than you and that they could bring only good to the country, while you with your murders can bring Russia only international shame and condemnation….