Another Crimean Tatar arrested and beaten over May 3 Dzhemilev protest

Edem Osmanov whose father, Mustafa, earned fame and gratitude last December when he brought ingredients from the Crimea to cook pilaf for freezing EuroMaidan protesters has become the fifth Crimean Tatar to be facing dubious charges over the peaceful protest on May 3 when veteran Crimean Tatar leader Mustafa Dzhemiliev was prevented from entering his homeland.

Osmanov was arrested on Jan 19 in Chernomorskoye and taken to the SIZO [remand unit] in Simferopol.  He is the fifth person to be detained after more than half a year on charges of using force against a police officer during the meeting with Mustafa Dzhemiliev on May 3 last year.

Emil Kurbedinov who is representing the other four men accused has seen Osmanov and plans to talk with his family about representing him as well.  All others, as reported here, were initially remanded in custody for 2 month periods but Kurbedinov has succeeded in getting them released pending trial.

Zair Smedlyaev, head of the Central Election Commission of the Qurultay or Crimean Tatar National Congress and the brother of one of the five men facing charges, says that Osmanov reports that the police beat him after he was detained. Smedlyaev calls this latest arrest “continuation of the campaign at intimidating the Crimean Tatars”.

That view is shared by Eskender Bariev, one of the heads of the Crimean Tatar Rights Committee.  He points out that they have now arrested the son of one of the activists of the Crimean Tatar national movement and calls the arrests a message to Crimean society and a mechanism aimed at breaking socially active people with their own point of view and making them less active.  His committee is working, he says, to ensure that the entire world learns of all these violations. 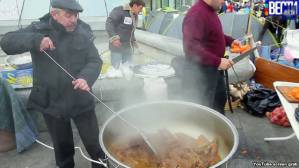 Edem Osmanov is the son of Mustafa Osmanov, a Crimean businessman who became well-known beyond Crimea in December 2013 when he drove his car, packed with food items to Kyiv in order to cook pilaf for EuroMaidan protesters.  The family home was subjected to a search under the Russian occupation in September 2014 on a strange pretext having nothing to do with the present case.

After the 5-year-ban on Mustafa Dzhemiliev entering the Crimea, announced in April then denied, was enforced on May 2, the Mejlis cancelled all events linked with a spring festive holiday and invited Crimea Tatars to come to the Armyansk border crossing between mainland Ukraine and the Crimea.

There was no mention of any physical violence against a police officer, yet since October 4 Crimean Tatars have been arrested and remanded in custody for 2 months.

After varying periods in detention, Tair Smedlyaev, Musa Alkerimov, Rustam Abdurakhmanov and  Edem Ebulisov were released from custody but are still facing the highly dubious charges.

The blurred line between accusations of ‘extremism’ and charges linked with one peaceful protest was most evident in the initial court hearing after Tair Smedlyaev’s initial arrest.  Although supposedly suspected of using force against a police officer, his original detention was ‘explained’ by the court as because of the prosecutor’s claim that 60 people had asserted that Smedlyaev was an ‘extremist’.

Among those summoned for questioning over the so-called 3 May ‘case’ was 80-year old Vedzhie Kashka, a veteran of the Crimean Tatar national movement.