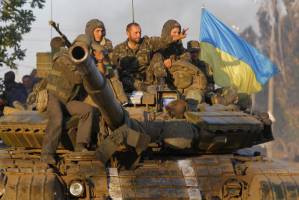 A new phase of mobilization began on Tuesday, despite Ukraine not officially being at war.  This and many other omissions and contradictions could lead to Ukraine losing crucial cases at the European Court of Human Rights.

Ukraine is continuing an ‘anti-terrorist operation’ in eastern Ukraine and there is no formal declaration of a state of war.

This is despite the fact that the National Security and Defence Council [NSDC] and other bodies regularly provide irrefutable evidence that Russian soldiers and Russian military equipment are being deployed in Ukraine.  The presence in Ukraine of Russian military technology, arms and men has been confirmed on a number of occasions by NATO and most of its member states, Amnesty International and others.  The OSCE Monitoring Mission may be cautious in the language it uses, however it also records clear signs of Russian engagement in Ukraine on a regular basis.

Ukraine’s leaders have asked the international community to declare the self-proclaimed ‘Donetsk and Luhansk people’s republics’ terrorist organisations, but have not done so themselves, even though they are officially carrying out an anti-terrorist operation, not waging war.

Linked and also of great concern is that over two months have now passed since Ukrainians were informed that the government had prepared the documents required to inform the Secretary General of the Council of Europe of Ukraine’s derogation of certain obligations as per Article 15 of the European Convention on Human Rights.  This is applied in times of war or other public emergency threatening the life of the nation.  Russia effectively invaded and illegally annexed the Crimea, and is now directly, or through heavily supported proxies, playing a dominant role in the military conflict in eastern Ukraine.  In these circumstances it remains unclear why the notification of derogation does not appear to have been sent.

On Jan 20 Presidential Decree No. 15/20 ‘On partial mobilization’ came into force, with three phases scheduled over the next 210 days.

Volodymyr Polevyy, deputy head of the NSDC Information and Analysis Centre, explains who is covered, who exempt and that evasion is a criminal offence under Article 336 of the Criminal Code.  He criticizes as “legally illiterate” the claim that mobilization can only be mandatory during martial law and says that martial law is not the only condition for mobilization.

Article 1 of the law on mobilization defines mobilization as “a complex of measures taken for the purpose of the planned transfer of the national economy of the state authorities, other state agencies, local governments, enterprises, institutions and organizations on functioning under the extraordinary period, and the Armed Forces of Ukraine and other military formations, Operational Rescue of civil defence - for the organization and staffing of war”.

What is this ‘extraordinary period’, if no state of emergency or war has been declared, only an anti-terrorist operation [ATO]?

Among those warning of problems with declaring mobilization, albeit partial, without a state of war, is Volodymyr Yavorsky, board member of the Ukrainian Helsinki Human Rights Union. He points out that the law on fighting terrorism does not envisage mobilization and is blunt in his assessment of the current situation:

“A country is either at war or it isn’t. It can’t trade with another country while at the same time be carrying out military action against it. This is manipulation of people, since people are fighting while the oligarchs trade and earn money”.  He believes that martial law should have been declared since a part of Ukraine’s territory has been seized.

He warns that mobilization summonses can be challenged in court and suggests that such cases have a good chance of succeeding at the European Court of Human Rights since the legal grounds for mobilization are at very least unclear and unforeseeable.  He and his colleagues believe that it is important to encourage volunteers now serving to remain and to sign long-term contracts with them, in order to lessen the need for the new mobilization.

Yavorsky is equally scathing of the failure to submit notification of derogation from provisions in the European Convention on Human Rights.  At present there are clearly greater restrictions on human rights in the East.  Without such notification, Ukraine’s actions will be assessed as though in ordinary peacetime.  Back on Nov 14, 2014, the NSDC, and then the President through a decree ordered this derogation documentation to be prepared.  The Justice Ministry even did this, Yavorsky says, and passed it to the Foreign Ministry, yet for some unknown reason nothing happened.  He calls this “criminal negligence” and warns again that there are already applications lodged with the European Court of Human Rights, and the cost to the state of losses over destruction of property is likely to be enormous.

Lawyer Vladimir Tochilovsky suggests that one reason for the failure to provide this notification may have been the need to define the situation in the zone of conflict and in Ukraine as a whole. Is it an anti-terrorist operation or military conflict, and, if the latter, is it within Ukraine or international?

It may well be, as he suggests, that one ministry cannot deal with the complex issues behind defining the conflict by itself, yet the decision and presidential decree were issued and not implemented.

The problem is not just the likely judgments against Ukraine in Strasbourg.  Reluctance to declare a state of war is understandable in situations where anything seems better than the outbreak of military conflict and the inevitable death and destruction as a result.  Eastern Ukraine has experienced little but such suffering for many months.  Mobilization has not been declared not because of fear of military action, but in the face of it and those who now receive summonses may soon be sent to fight.  Failure to officially acknowledge what Ukrainians have been living with since the Spring of 2014 can only arouse distrust and questions about who benefits by not declaring a state of war in which Russia, not isolated ‘terrorists’, is the main aggressor.