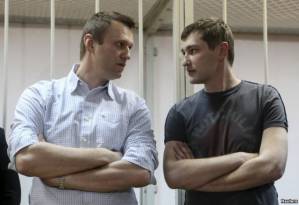 The three-year sentence passed on Oleg Navalny has been widely seen as hostage-taking and an attempt to stifle his brother – leading political opposition figure Alexei Navalny.  Memorial’s stand only strengthens this view.

On Jan 22 the authoritative Memorial Human Rights Centre published a statement regarding the sentences passed by a Moscow court on Dec 30 on prominent opposition politician and anti-corruption campaigner Alexei Navalny and his brother Oleg.   Memorial had previously condemned their trial as politically motivated, and is now clear that Oleg Navalny must be considered a political prisoner.

It bases its position on the fact that “an obvious political motive can be seen for the prosecution, namely to stop the public activities of Alexei and remove the risks that his activity presents the current regime.”  Additionally, however, Memorial believes that there was nothing criminal in the Navalny brothers’ actions, and that any disputes that arose over ordinary economic activities should have been resolved through civil action.  “However the individuals declared ‘victims’ did not present any grievances, and the criminal prosecution was effectively initiated not through their initiative, but at the initiative of the Russian Federation’s Investigative Committee.”

Memorial points out that it first declared Alexei Navalny a political prisoner after he was placed under house arrest and the trial in the Zamoskvoretsky District Court only confirmed its position, by demonstrating the Navalny brothers’ innocence.

Oleg Navalny was given an actual three year sentence and taken into custody.  Memorial believes that this is further cause for considering him a political prisoner and his imprisonment unlawful. Other grounds were the circumstances around the passing of sentence.  As reported, the original date for the court hearing was Jan 15, 2015, and major demonstrations in support of the brothers were planned for that day.  Even under Russia’s draconian laws on peaceful assembly it was difficult for the authorities to totally ban demonstrations announced far in advance and in full accord with Russian legislation.

They resorted to other measures, and on Dec 29 it was suddenly announced that the court hearing had been brought forward to the next morning.  This meant that any protest, aside from single-person pickets, would be illegal.  A very large number of protesters were detained, with many held overnight in detention.

Memorial points out that the court only read out the sentence part of the ruling, not the justification part.  It is strictly prohibited in Russian law to remand in custody a person only charged with economic crimes.  Since the full verdict had not even been provided, and the sentence had not come into force, the fact that Oleg Navalny was immediately taken into custody still further confirms the political nature of this case.  It is disappointing that Yves Rocher should have cooperated with the Russian authorities over this shameful prosecution.

Memorial’s statement is important but no surprise with few genuinely doubting the political nature of this prosecution.  Memorial does not mention another telling detail, namely the fact that only Oleg Navalny received an actual sentence with Alexei formally getting a suspended sentence.  Previous attempts to incarcerate President Vladimir Putin’s main political opponent still in Russia had forced the authorities to back down.  Both the suspended sentence and the fact that Alexei was not taken into custody even after he flouted his (unlawful) house arrest to join protesters on Dec 30 demonstrate that Moscow is still nervous about public protest over his direct imprisonment.

They have instead turned to hostage-taking by imprisoning his brother, with the assumption clearly that this will subdue Alexei.  As Ilya Yashin, an opposition activist who was at the court to support the brothers put it: “Oleg is a hostage.  This is a mechanism of pressure on a person: try fighting corruption when your brother’s in jail."