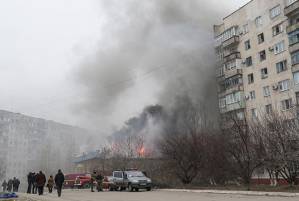 Ukraine has still not ratified the Rome Statute under which Russia could be forced to answer for war crimes.  Following the deliberate missile attack on civilian targets in Mariupol on Jan 24, 2015 in which at least 30 people died, including 2 children, Ukraine’s parliamentarians have no excuse not to pass the relevant bill immediately.

It takes only a glance at the relevant article of the Rome Statute to understand that Siryi’s words should be understood quite literally.

Article 8 specifies that the International Criminal Court shall have jurisdiction in respect of war crimes, namely grave breaches of the Geneva Conventions of 12 August 1949, including: (i) Wilful killing; (iii) Wilfully causing great suffering, or serious injury to body or health; (iv) Extensive destruction and appropriation of property, not justified by military necessity and carried out unlawfully and wantonly;  as well as other serious violations of the laws and customs applicable in international armed conflict, within the established framework of international law, namely, any of the following acts, including (i) intentionally directing attacks against the civilian population as such or against individual civilians not taking direct part in hostilities; or (ii) Intentionally directing attacks against civilian objects, that is, objects which are not military objectives.

The OSCE Mission reports “incoming massed Multi-Launch Rocket System (MLRS) attacks ... on an area of 1.6 km by 1.1 km, including an open market, multiple impacts on buildings, retail shops, homes and a school. “

It confirms that the Grad and Uragan rockets originated from different directions, but both from areas “ controlled by the “Donetsk People’s Republic” (“DPR”).

Whether the missiles were launched by the militants themselves, or by Russian forces whose increased presence over recent days has been confirmed by, among others,  NATO, there can have been no doubt that they could hit civilian targets.  As outrage mounted both in Ukraine, and from western countries, efforts were mounted both by the militants and by pro-Kremlin Russian media to present the shelling of a residential area as an act of ‘provocation’ by the Ukrainian forces, claiming, for example, that the shelling had come from areas under the control of the Ukrainian armed forces.  Nor were they to be hindered by the OSCE report which refuted that.  Both official news agencies ITAR TASS and RIA Novosti simply removed any mention in their coverage of the OSCE report of the latter’s mention that the areas from which the missiles were fired were “controlled by the ‘Donetsk people’s republic’”.  The attempts were pitiful especially in the light of the announcement on Jan 23 by militant leader Aleksander Zakarchenko of an end to the so-called ceasefire and offensive on Mariupol.

NATO’s Secretary General spells out the degree of Russian involvement, stating that:

In fact, the only thing that is unclear is why he confines himself to strongly urging “Russia to stop its military, political and financial support for the separatists, stop destabilising Ukraine and respect its international commitments.”

These international commitments include not committing war crimes or directly abetting others in doing so.

Russian-backed militants or Russian forces may on Jan 13 have been trying to shell the Ukrainian military checkpoint near Volnovakha, however they must have known that they could kill civilians stopped at the checkpoint.  In that tragedy 13 people died. The direct hit of a bus stop in Donetsk on Jan 22 received almost instantaneous coverage by a number of pro-Kremlin Russian TV channels whose footage of ‘enraged Donetsk residents’ includes at least two women who have been presented with different personae in quite different places.  There are very good grounds for suspecting militants of having shelled the bus stop since the mortar shelling was well out of range of the nearest Ukrainian base at Pisky.

It is effectively only Russia who is denying that the Buk surface to air missile carrier which downed the Malaysian airliner MH17 on July 17 came from Russia. It must have been provided with instructors who did their job accurately enough for the militants to boast to Russian TV Life News that they had downed a Ukrainian military personnel carrier, but not enough for the latter to distinguish between that and a passenger plane.

The list of similar crimes can be continued.  Ukrainian human rights activists, as well as lawyers from the International Federation for Human Rights have stressed the urgent need for Ukraine to finally ratify the Rome Statute.  Since Ukrainian legislation does not have mechanisms for investigating crimes committed on territory under Russian-backed militant control, this would make it possible for such investigations to be passed to the International Criminal Court.

At a press conference on Jan 22, Oleksandra Matviychuk from the Centre for Civil Liberties explained that “for us the Rome Statute is perhaps the only possibility of bringing Vladimir Putin and his blood-drenched proxies to answer.  That is difficult and it is a theoretical possibility, however with ratification of the Rome Statute, the possibility at least appears. “

She added that for 15 years now Ukraine’s legislators have been unable to add one simple, technical, sentence to the Constitution enabling parliament to ratify the Rome Statute.  Draft law no. 1788 on rectifying this was registered in parliament last week.  The October parliamentary elections gave a resounding victory to parties supporting Ukrainian unity and its European choice, and it should not be difficult to gain the necessarily two-thirds majority for making an amendment to the country’s Constitution.

Whether other countries will prove willing to pursue Russia through the International Criminal Court for the military aggression it has unleashed in Ukraine is probably unclear.  Ukraine’s parliament can, however, and must take that first step.  Failure to properly name the aggressor and document their crimes would be a betrayal of all the victims of this senseless carnage