Stalin returns to the Russian CurriculumStalingrad as latest step in re-glorification of tyrantNeo-Nazis in Moscow’s ServicePro-Russian separatists start their own anti-Semitic TV channelPro-Russian, anti-Roma, anti-Semitic and hunting out Ukrainian speakersThe Donetsk anti-Semitic leaflets – what should not be overlookedEast Ukraine crisis and the ’fascist’ matrixRussia continues its false narrative as defender of oppressed minorities in UkraineRussian propaganda claims Jewish organizations supporting Maidan are bringing on "second Holocaust"The Crimean referendum’s neo-Nazi observersPutin’s Neo-Nazi HelpersChief Rabbi and others dismiss Putin’s “anti-Semitic extremist” claimsRussian propaganda must be challengedWestern Media: Don’t distort the situation in Ukraine!Russia’s aggression poses dangers beyond Ukraine’s bordersCrimea: Anti-Semitic card and other provocation in time of siegeMr Putin: We ethnic Russians and Russian speakers don’t need protectionDangerously orchestrated Crimean exerciseRussia claims threat to its interests and life of Russian nationals in UkraineBlood and Berkut Sniper Bullets on the President’s Hands
• Topics / News from the CIS countries 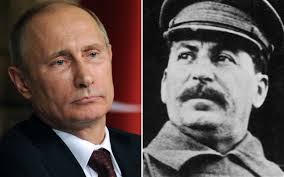 Less than 8 years after Russian President Vladimir Putin publicly encouraged ‘positive moves’ in the presentation of the country’s history, a Levada Centre opinion poll has found 52% of Russians viewing Joseph Stalin in a positive light, the highest rating for the bloody dictator since such questions were asked.  Only 30% see him in a negative light.  A rather curious development is that the same percentage were positive in their assessment of the last Tsar, Nicolai II, murdered together with his entire family in 1918 on the order of Vladimir Lenin (viewed positively by a mere 36% of respondents.)

The Deputy Head of the Levada Centre, Alexei Grazhdankin told Vedomosti that the positive attitude towards Stalin was mainly connected with the Soviet Union’s victory in the Second World War.  “Starting with the commemoration of the 60th anniversary of Victor Stalin took on ever more positive features in Russians’ eyes”.  He says that ever more people recall his role as Chief Commander and less and less about the period of repression.

This is doubtless true, however it did not happen by accident, but as a part of deliberate policy carried out over the past 8 years aimed at concentrating on the ‘positive’  in Russian / Soviet history and muffling its very dark pages.

It was announced in October 2014 that the speech Stalin made soon after Nazi Germany invaded the USSR is to be included on a list of main sources for senior students to study.  In the culture ministry’s list of ‘100 main sources of Russian history’ for study in schools and higher education from 2015 no mention is made of other pivotal speeches, such as that by Nikita Khrushchev in 1956 denouncing Stalin.

Even if students were to be told of the million lives lost just in the first weeks of the War because of Stalin’s blindness and criminal incompetence, and the number of generals executed during the Terror, leaving the Soviet army weakened in the face of grave danger, the speech made by Stalin on July 3, 1941 will inevitably be viewed in a positive light.  This is doubtless the intended effect and will make it even less likely that students will focus on Stalin’s crimes.

Stalin’s speech presents a justification for the Ribbentrop – Molotov Pact by claiming that it was merely a non-aggression agreement. The secret protocol to the pact was in fact an agreement to carve up Poland between two aggressors.

The speech chosen pushes the key theme that the Soviet Union / Russia fought against Nazi fascism and that mass- scale repression of so-called ‘traitors’ and enemy elements, requisitions and other measures which before the War had killed millions were somehow needed to ‘defend’ the country.

The careful choice of speech for use with students is in keeping with Putin’s ‘educational initiative’ in 2007.  In June that year, during a meeting with history teachers, Putin spoke of the need for ‘positive moves’ in teaching history. He said that up till recently you read things about the country’s history which could make one’s hair stand on end. One of two manuals for teachers of history and social studies which won Putin’s own stamp of approval at that time – ‘The Newest History of Russia. 1945-2006’, by Alexander Fillipov and others,  Joseph Stalin was called “one of the most successful leaders of the USSR”. In the chapter entitled “Arguments about the role of Stalin in history”, the authors assert: “In essence, the aim of Stalin’s domestic and foreign policy was the restoration – political and territorial of the Russian Empire”.

“The outcome of Stalin’s purges was the formation of a new governing class, able to cope with the task of modernization given the shortage of resources – unwaveringly loyal to the upper echelons of power and irreproachable from the point of view of executive discipline”.

Easy to see why both Stalin and Nikolai II are by now viewed in a positive light.

Other moves over the last few years have included the initiative to bring back the name Stalingrad, purportedly in memory of those who defended the city, now called Volgrograd, at the pivotal Battle of Stalingrad in February 1943  (see: Stalingrad as latest step in re-glorification of tyrant )

Stalin’s portrait was posted over main cities in Russia for Victory Day in 2010. Given the line taken by the Kremlin to justify aggression against Ukraine in the last 10 months, it is more than likely that Stalin will be still further glorified as ‘defeater of fascism’ in the run-up to the seventieth anniversary of Victory over Nazi Germany on May 9, 2015.