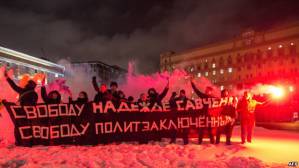 On the eve of a Parliamentary Assembly of the Council of Europe [PACE] debate on whether to reinstate the Russian delegation’s credentials, Ukrainian MP and PACE delegate Nadiya Savchenko is on the 46th day of her hunger strike in Russian detention and a number of people in Moscow have been jailed for up to 45 days in connection with a peaceful protest demanding Savchenko’s release.

Demonstrations in support of Nadiya Savchenko took place around the world on Monday, the first day of the PACE session.  Only in Moscow were activists arrested and imprisoned.

On Monday evening, over 20 activists came out onto Lubyanka Square in Moscow and unfurled two banners: one, with the Ukrainian trident image called for Nadiya Savchenko’s release; the other – for the release of Savchenko and political prisoners in general.  The protesters were in the middle of the square where the statue to Felix Dzherzhynsky once stood, and there was no way that the fireworks and smoke bombs that they lit could have hurt any passer-by.  The protesters chanted slogans calling for the release of Savchenko;  the Crimean political prisoners Oleg Sentsov, Oleksandr Kolchenko and many other political prisoners (see the video here).

They were also expressing their support for Mark Galperin, 75-year-old Vladimir Ionov and Ildar Dadin arrested earlier for peaceful protests.  Galperin and Ionov could face 5 year sentences as the first two people prosecuted over the draconian new law passed in the summer of 2014 which impose criminal liability for four or more so-called infringements at public gatherings within 6 months.)

Just how difficult it is for any peaceful protester in Russian to avoid being arrested and charged with ‘infringements’ was demonstrated on Monday evening.  The police were on Lubyanka awaiting the protesters and arrests began within minutes of the protesters unfurling their banners.   11 people were arrested and taken to the police station.  All were held overnight in two police stations and not allowed to see lawyers.

The court hearings began on Tuesday afternoon.  Alexander Shelkovenkov was sentenced to 45 days imprisonment in total.  15 days were for supposedly disobeying the lawful order of a police officer and 30 days under Article 20.2 of the Code of Administrative Offences for repeated infringements of legislation on meetings.  Judge Alesya Orekhova saw fit on both charges to impose the maximum possible sentence.

This same representative of the Russian justice system was the first judge to apply the punitive norms of the above-mentioned new law on meetings against Mark Galperin.

Vera Lavreshina, who declared a hunger strike on Monday evening, was jailed for 10 days,  and three others received 15-day sentences.  Three woman activists received fines, since they have children and administrative arrest may not be applied.  Other hearings are pending. 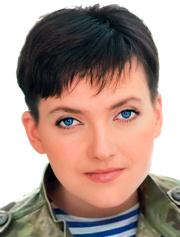 The PACE winter session began well with Nadiya Savchenko being accepted as a PACE delegate.  The Assembly thus accepted that the former military pilot who was forcibly taken to Russia and placed in detention after being captured by Kremlin-backed militants was entitled to international immunity from prosecution.  PACE President Anne Brasseur said in her opening speech that she hoped the situation could be resolved swiftly.

Throughout Monday, there were reports that the Russian delegation was working hard to convince members that Russia’s rights at PACE, suspended in April 2014, following Russia’s annexation of Crimea, should be reinstated.  There was also speculation that a reported change in Russian position and willingness to support the resolution might indicate that a behind-the-scenes agreement was being brokered.

Nadiya Savchenko’s lawyer Mark Feygin met with the PACE President on Tuesday and another source suggests that a formal letter to Russia may be sent on Wednesday.

It is very much to be hoped that some resolution is imminent.

Of concern, however, remains the difficulty in believing Russian sincerity since the resolution on Ukraine adopted on Tuesday was opposed by all but one Russian MP.

It is also not clear who the words of the resolution refer to:  Russia is called on to: “immediately release all prisoners of war, including member of the Ukrainian Parliament and of the Ukrainian delegation to the Parliamentary Assembly, Nadiya Savchenko and other Ukrainian citizens who remain illegally detained in Russian prisons”.

Nadiya Savchenko has been on hunger strike since Dec 13 and has consistently refused to give up until she is released and able to return to Ukraine.  The situation is thus critical and cannot brook any further delay.

She is not the only Ukrainian whom Russia has detained on falsified charges.  As well as obvious prisoners of war who have been effectively abducted to Russia, there is a very real danger that Crimean opponents of Russian annexation Oleg Sentsov and civic activist Oleksandr Kolchenko, held in Russian detention since May 2014, could receive 20-year sentences over a non-existent ‘Right Sector terrorist plot’.  See: Russian secret trial to convict opponents of Crimean annexation

Their imprisonment, the ongoing offensive against the Crimean Tatars and undeclared war in eastern Ukraine are in flagrant breach of Russia’s commitments made in joining the Council of Europe.  Empty assurances are not enough and we can only hope that behind-the-scenes negotiations have demanded much more.