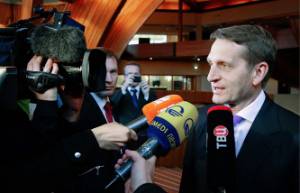 Russia’s State Duma speaker Sergey Naryshkin, who once accused Ukraine of ’annexing’ the Crimea has now instructed the parliamentary committee on international relations to examine the possibility of adopting a statement condemning “the annexation of the German Democratic Republic by the Federal Republic of Germany in 1989”.

ITAR TASS presents this dazzling initiative as having been put forward by communist deputy Nikolai Ivanov who did not conceal the motives for it.  Ivanov announced that they had all felt for Naryshkin at the Parliamentary Assembly of the Council of Europe [PACE] press conference on Jan 26 when he “deflected the attacks from the PACE President Anne Brasseur, accusing Russia of ‘annexing Crimea’.”

This, he said, would be their answer, particularly since “unlike Crimea, there was no national referendum in GDR”.

Now Naryshkin had doubtless had enough of unpleasant words like aggression, annexation and political prisoners in Strasbourg.  This is not to mention the need to make some kind of promises regarding Ukrainian MP and PACE delegate Nadiya Savchenko whose life is in danger after 6 weeks on hunger strike in Russian detention.  Words like abduction and hostage-taking may not be pleasant to the ear, but what else do you call a situation where the then military pilot was taken prisoner by Kremlin-backed militants and forcibly transferred to a RUSSIAN prison to face falsified criminal charges?

This may be the reason why the ‘analogy’ with East and West Germany first came to Naryshkin’s beleaguered mind.  On Jan 25 he is reported to have condemned the PACE decision in April 2014 to withdraw the credentials from the Russian delegation over Russia’s annexation of Crimea.  He called reference to the PACE April decision “ineligible because the reunification of the Crimea with Russia was carried out on the basis of the most democratic procedure of the referendum, when 97 % of the respondents strongly supported the reunification of our Motherland. If we follow the logic of those who call this historic event by annexation, we can just as easily talk about the fact that the Federal Republic of Germany annexed East Germany or the German Democratic Republic. The logic here is absolutely the same”.

“However, he noticed that the Russian Federation is fundamentally against such logic as in the case of the GDR, and in the Crimea." We are generally always against war standards”.

The report goes on to present the Russian version of events in February and March 2014.  It fails to mention the seizure of the Crimean parliament on Feb 27 by Russian soldiers without insignia, and the instalment at gunpoint of a pro-Russian ‘government’.  In fact it leaves out most crucial details altogether, including the fact that the ‘referendum’ was not only condemned by the Council of Europe’s Venice Commission and democratic countries, but was also acknowledged to have been effectively falsified by the Russian Human Rights Council under the President.  The neo-Nazi and Stalinist European politicians whom Russia invited to ‘observe’ the spectacle gave a different version, but then they always do.

Naryshkin has already applied the same ‘logic’ on an earlier occasion.  In June 2014 he asserted that it was Ukraine that had annexed the Crimea, not Russia.  This monstrous deed on Ukraine’s part had supposedly been committed in August 1991.  An explanation of Naryshkin’s foray into history can be found here: Russia accuses Ukraine of ‘annexing’ the Crimea.

If words like ‘annexation’ cause distress, there are better ways of dealing with the situation.