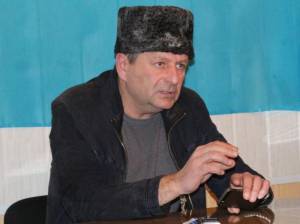 UPDATE   A search by men in masks carrying machine guns began at around 7 a.m. on Friday morning, and is still underway.  The enforcement officers are o be not letting people in and out and behaving in an extremely aggressive manner

Akhtem Chiygoz, Deputy Head of the Mejlis or representative assembly of the Crimean Tatar People was arrested on Thursday evening on charges of ‘organizing and taking part in mass disturbances’.  The move is one of truly unprecedented cynicism.  Not only is there video footage demonstrating that Chiygoz tried to calm protesters, but the demonstration in question took place on Feb 26, 2014, the day before Russian soldiers seized control and weeks before Russian illegally annexed the peninsula.  This is the latest of many repressive moves against the Mejlis, and Crimean Tatars in general under Russian occupation.

Following repeated attempts since annexation to undermine the Mejlis which represents the vast majority of Crimean Tatars, the Russian Investigative Committee’s constantly refers to it as the “civic organization “Mejlis of the Crimean Tatar People”, i.e. one NGO among many.   The statement directly blames only “unidentified persons of Crimean-Tatar nationality” for trouble on Feb 26, with members of the marginal nationalist organization ‘Russian Unity’ which had organized a counter-demonstration at the same time and place, presented as victims of violence.  This is doubtless because the head of ‘Russian Unity’ is Sergey Aksyonov who was installed in power at gunpoint by the Russian soldiers who seized the parliament building on Feb 27, 2014.

The IC statement clashes with at the time, and Radio Svoboda that it has both photographic and video footage refuting the charges laid against the Deputy Head of the Mejlis.  One of the few truthful elements in the IC version of events is the mention of ‘legitimate demands by representatives of the Ukrainian police during the demonstration, making the attempt by Russia to pursue any prosecution under Russian law not in effect at the time particularly grotesque.

Representatives of the Mejlis and human rights groups believe that Chiygoz’s arrest is the latest attempt at political pressure on the Mejlis, and a new phase in the ongoing repression by the Russian-installed ‘government’ under Aksyonov. Chiygoz has been remanded in custody until Feb 19, and his colleagues fear that other arrests are likely.

Natalya Poklonskaya, whom Aksyonov installed as ‘Crimean prosecutor’, was present at the court hearing on Thursday evening. She told journalists that Chiygoz is accused of a serious crime, under Article 212 of the Russian criminal code which could carry a 10-year prison sentence. “And as the result of the given crime there were two victims – two deaths, as well as people with varying degrees of injury”.

At the time one of the people was reported to have died of a heart attack.  Even if it were proven that both deaths were as a direct result of the demonstration, the charges seem unrelated to the person arrested, and are in any case from a criminal code which was not in force at the time of the alleged offences.

The Head of the Mejlis, Refat Chubarov of a “new spiral of repressive measures against activists of the Crimean Tatar national movement. Clearly, as always, the main attack will be against the Mejlis and its members.”

The Head of the Mejlis has had direct experience of this attack since both he and the veteran Crimean Tatar leader, member and former head of the Mejlis Mustafa Dzhemiliev have been banished from their homeland by the occupation regime.  The repressive measures against Dzhemiliev and Chubarov, who had never concealed their opposition to Russia’s invasion and annexation of Crimea, did not silence protest within the Mejlis.  The next crackdown began on September 16, following the Mejlis’ call for all Crimean Tatars and other Crimeans concerned about violations of Crimean Tatar rights to boycott the pseudo elections on Sept. 14 .  The mounted attack against both the Mejlis and the Crimea Foundation, a charity closely linked with the Mejlis, has continued.

Repressive measures have not been confined to the Mejlis alone.  Over recent months there have been an increasing number of arrests on highly dubious charges laid 6 months after the May 3 peaceful protest at the Armyansk border crossing when a mass contingent of OMON riot police and others prevented 71-year-old Mustafa Dzhemiliev from entering Crimea.  On Jan 23 one of the coordinators of the Crimean Tatar Rights Committee Sinaver Kadyrov, a Ukrainian citizen living in his native Crimea,  was ‘deported’ from Crimea.  He had been stopped together with the other coordinators – Eksender Bariyev and Abmedzhyt Suleymanov at the Armyansk Crossing as they attempted to cross into mainland Ukraine.   Only Bariyev and Suleymanov, both members of the Mejlis, were able to make the flight.  Colleagues now believe that they could face arrest if they return.

There has also been an open attack on the only Crimean Tatar TV channel ATR.  The pretext used this time was the demonstration on Feb 26, 2014, however the channel has already faced two warnings over so-called ‘extremism’.

The question in one report on the arrest of Akhtem Chiygoz seems all too bitterly obvious: after 11 months of Russian occupation, who will be the next victim of repression?