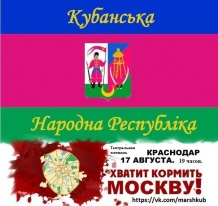 The Ukrainian Migration Service is reported to have turned down Russian activist  Pyotr Lyubchenkov’s asylum application despite apparently strong grounds for believing he would face political persecution back in Russia.

The decision dated Jan 6, although only received on Jan 20, states that Lyubchenkov’s account of persecution does not meet the requirements for refugee status and also says that there were discrepancies in his story, influencing the decision.

There could be genuine grounds for rejecting his application, however Ukraine’s migration authorities are notoriously prone to saying no, and there are reasons for wondering in this case.  This is especially so since the report on Prestupnosti.net says that another Kuban asylum seeker Viacheslav Martynov’s application was also turned down.  As reported here, a senior migration service official had stated that Martynov was at risk of unlawful treatment if he remained in the Russian Federation,

Both refusals have been appealed with Lyubchenkov’s due to be heard at the beginning of February.

Lyubchenkov says that he received threatening phone calls every day, and there were also threats to set fire to the children’s centre where he worked as a psychologist. Even if he could not prove this to the migration service’s satisfaction, the Russian authorities have provided plenty of evidence, particularly by imprisoning a third activist, and declaring them all ‘extremists’ or ‘terrorists’.

In August last year three Krasnodar residents – Lyubchenkov, Martynov and a left-wing activist Darya Polyudova were prohibited from holding a march in favour of federalization.  They responded by declaring a ‘Kuban people’s republic.  Unlike the militants in Ukraine whose armed seizures of official buildings, hostage-taking, looting and, later, open warfare, are supported by the Kremlin, the Kuban activists went no further than some talk on social networks.   The name of the ‘republic’ did, as mentioned echo the anti-Bolshevik republic which existed for 21 months until Nov 7 1919 and there are also strong historic links with Ukraine.

Darya Polyudova - was arrested on Aug 15, after being approached by an obvious provocateur, then jailed for 14 days for what the court decided to consider ‘petty hooliganism’.  She was never released even though the criminal proceedings which she is now facing were only initiated on Sept 15.  They are under Article 280.1 of the criminal code for alleged public calls to actions aimed at violating Russia’s territorial integrity.

The actual demonstration had been planned for Aug 17 to coincide with the first march planned – for Siberian federalization - which the authorities also banned. Martynov was one of around 10 people who actually took part in a protest on that day wearing a ribbon around his wrist in the colours of the Ukrainian flag.  The protesters were seriously outnumbered by Cossacks, police and provocateurs.  The incident used to jail Martinov for 15 days on a charge of ‘petty hooliganism’ is blocked inside Russia, but other viewers can see it here.

There was no information at the time about Lyubchenkov’s role, however he and Martynov both fled to Ukraine.  The two men and Polyudova were placed on Russia’s Federal List of Terrorists and Extremists on Sept 26.

The Kuban – and Siberian – federalists were effectively asking only for a greater say in the running of their regions, and were doing so peacefully, without violence, and without trying to overthrow the government in power.

What other grounds the Ukrainian authorities are seeking is seriously hard to fathom.